Historical Background
“When they (the Germans) were thus roused and demanding battle, their chiefs led them down into a plain named Idistavisus (or Idivisto) It winds between the Visurgis (the Weser?) and a hill range, its breadth varying as the river banks recede or the spurs of the hills project on it. In their rear rose a forest, with the branches rising to great height, while there were clear spaces between the trunks. The barbarian army occupied the plain and the outskirts of the wood. The Cherusci were posted by themselves on the high ground, so as to rush down on the Romans during the battle.”

“Our army advanced in the following order, The auxiliary Gauls and Germans were in the van, then the foot archers, after them four legions and Caesar (Germanicus) himself with two praetorian cohorts and some picked cavalry. Next came as many other legions and light-armed troops with horse-bowmen and the remaining cohorts of the allies. The men were quite ready and prepared to form in line of battle according to their marching order. “

“Caesar as soon as he saw the Cheruscan bands which in their impetuous spirit had rushed to the attack, ordered the finest of his cavalry to charge them in the flank…Meanwhile there was a most encouraging augury. Eight eagles seen to fly towards the woods and to enter them caught the general’s eye. “Go”, he exclaimed, “follow the Roman birds, the true deities of our legions.” At the same moment the infantry charged, and the cavalry which had been sent on in advance dashed on the rear and the flanks. And, strange to relate, the two columns of the enemy fled in opposite directions, that which had occupied the wood, rushing into the open, those who had been drawn up in the plains into the wood. The Cherusci, who were between them, were dislodged from the hills, while Arminius, conspicuous among them by gesture, voice, and a wound he had received, kept up the fight. He had thrown himself on our archers and was on the point of breaking through them, when the cohorts of Raeti, Vindelici, and Gauls faced his attack. By a strong bodily effort, however, and a strong rush of his horse, he made his way through them, having smeared his face with his blood, that he might not be known. Some have said that he was recognized by Chauci (members of a German Tribal group) serving among the Roman auxiliaries, who let him go. “

“Inguiomerus owned his escape to similar courage or treachery. The rest were cut down in every direction. Many attempting to swim across the Visurgis were overwhelmed under a storm of missiles, or by the force of the current, lastly by the rush of fugitives and the falling in of the banks. Some in their ignominious flight climbed to the tops of trees, and as they were hiding themselves in the boughs, archers were brought up and they were shot for sport. Others were dashed to the ground by the felling of trees”

“It was a great victory and without bloodshed to us. From nine in the morning to nightfall the enemy was slaughtered, and ten miles were covered with arms and dead bodies, while there were found amid the plunder the chains which the Germans had brought with them for the Romans, as though the issue were certain. The soldiers on the battlefield hailed Tiberius (the Emperor back in Rome) as Imperator, and raised a mound on which arms were piled in the style of a trophy, with the names of the conquered tribes inscribed beneath them."

Historical Note: The above account should be read with some large grains of salt. Tacitus was a great advocate and historical propagandist for Germanicus, the Roman commander at the battle. Likely the actual Roman victory was somewhat harder than the story implies. Certainly if fighting went on from nine in the morning until sundown, a passage in time of some ten hours plus, that would certainly suggest that the issue was in some doubt for a while and that the Germans hardly folded easily amid the Roman advance.

(From ‘The Annals of Imperial Rome’ Book II by Tacitus  written early 2nd Century AD—Tacitus was of Roman consular rank and had governed the Roman province of Asia in 112-113AD). 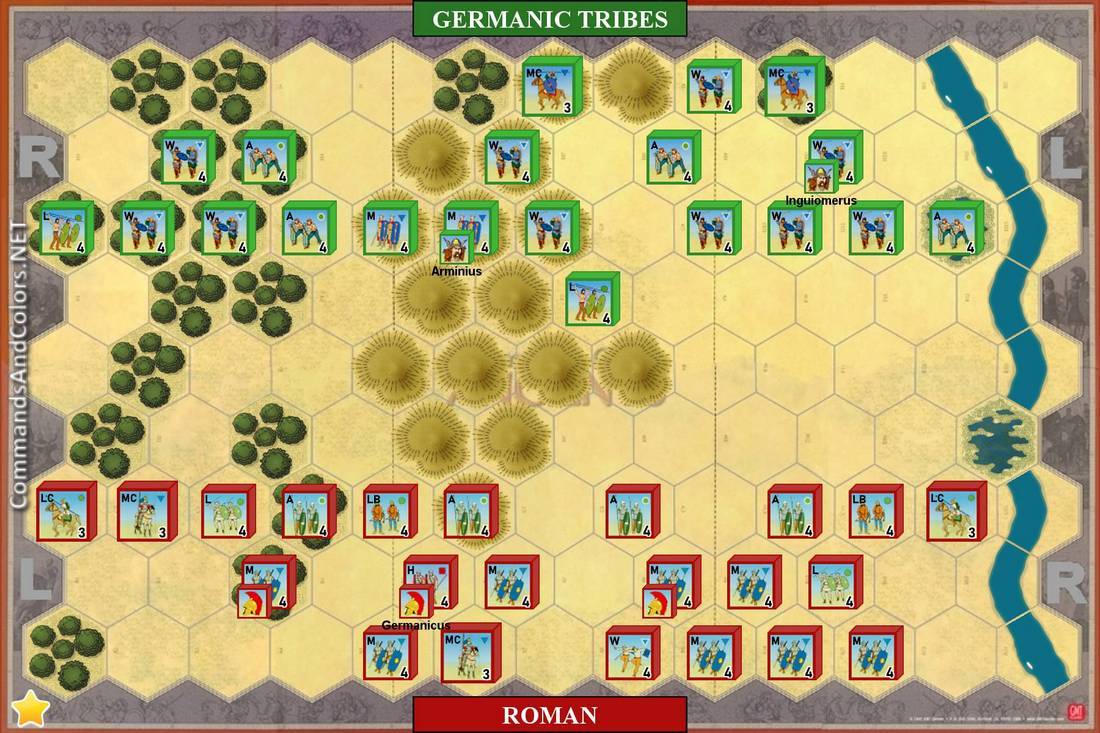 Special Rule
Leader Command, Caesar, & Rally Special Rules:
Germanicus can cancel both a retreat and a sword hit if present with the unit receiving such hits. All other Leaders can cancel a retreat or a sword hit if present with the unit.
Units on both sides involved in close combat with the support of a Leader may only count one helmet hit amongst those rolled to inflict a hit on an opposing unit, unless Germanicus or Arminius is the supporting leader---than up to two helmet hits may be counted.

Roman Legions Rules:
The Roman use both the Marius Legions and Julian Legions rules.

Roman Cavalry Discipline:
Roman Cavalry units only retreat two hexes per Flag result inflicted on (or taken voluntary) by them. Roman Light Cavalry hit on swords when battling back only.

German Line Commands: The maximum number of units the German
Player may move/order with a single Line Command Card is six units.