Semi-Historical Background
“After several hours of marching, during which renewed rain was their main harassment, the Romans approached a ridge of high wooded ground, located between what are now the villages of Driburg and Bielefeld. They made steady progress, the German (hit and run) attacks were less frequent than on the previous day, and hopes began to rise that before night they world be out of the forest and close to safety.”

“Moving up a narrow valley, the head of the (Roman) column came to a dead halt. The way was barred by a high barricade of tumbled tree trunks, some of them bound together with leather thongs. Thorn and other bushes were interspersed with rocks and made an inextricable mass, yards deep. On either side the hills were steep. Even if engineers could hew a passage through it or if foot soldiers could scramble up the cliffs and around it the advance was doomed to a dangerous delay.”

“News of the development leapt like wildfire down the line and with it came greater dismay. Orders were issued to abandon the wagons and ballistas and set them afire. When some of the soldiers witnessed this action they broke rank and rushed to the wagons to retrieve some of their personal valuables, gold and silver ornaments, money, and the like.”

“Arminius (the German Supreme Chief) saw that his great moment was at hand and ordered a general attack. Ear-splitting war cries burst on the ears of the weary Romans, and tribesmen in undreamed of nightmarish numbers came upon them from all sides. But even in such terrible hours Roman legions did not perish easily. Ranks were tightened, walls of shields faced the enemies, and the Roman javelins whistled in the air. Up to the shields swarmed the tribesmen, and bitter hand to hand fighting occurred everywhere. Desperate, the Roman commanders ordered various units to break rank and counterattack the Germans from the flanks. It was in vain. They were wiped out, and more and more tribal warriors, sure that the joys of Valhalla awaited those who would die, stormed like waves of the sea against the embattled Romans.”

“Commanding mounted squadrons, Arminius, fighting with a ferocity equaling that of his followers, time and again charged the Romans, killing many of them with his own hand. Numonius Vala and his thousand Roman cavalry fled pell-mell down the ravine, hoping to reach (the Roman post at) Aliso by some roundabout way. Arminius had foreseen some such possibility. Numbers of his own cavalrymen and tribal marksmen were ready, held in reserve in the forest. Vala and his riders, unable to keep together, bewildered by woods and swamps, were slaughtered to the man.”

“Then orders for a retreat down the ravine were issued in the Roman ranks. Whether these came from Varus is not known, but the withdrawal started. It was the beginning of the end. Cheering Germans hacked their way right through the ranks, splitting the legions into encircled units. The disciplined strength of the massed Romans was hammered into the mud. Most of the Romans fought to the last, but others threw away their shields, and shouting in panic, sought to flee where escape was impossible.”

“A javelin whirred through the air and hit Varus in the throat. He fell to the ground. He must have remembered the screams of the tortured, for he flung himself on his own sword point. Many of his officers chose death the same way. By nightfall eighteen thousand Romans had been killed or wounded…..”

“Two thousand Roman legionaries, possibly those in the front ranks near the barricade, succeeded somehow in fighting their way out of the trap. They reached the western fringe of the forest…and established camp on a small hill, some eight or ten miles from Aliso. No help came from Aliso where some Roman forces were stationed. These were pinned up for a time by tribal contingents obeying orders from Arminius.”

“Massed on their small hill, the Romans faced the end bravely. It came a dawn in one overwhelming attack. No Roman survived, but dead tribesmen lat thick around their position. (The Three Roman Legions) Phollux, Claudia, Victrix were no more. The plot so carefully developed by the towering Cherusci prince (Arminius) had resulted in one of the most shattering victories ever achieved over Roman troops. That night great bonfires blazed in the forest.”

(The above is a semi-historical, but obviously somewhat fictionalized account of the end of Varus’ Legions. It appeared in the book Battles and Bloodshed by Albert Orbaan in 1960 and was published by Scholastic Book Services). 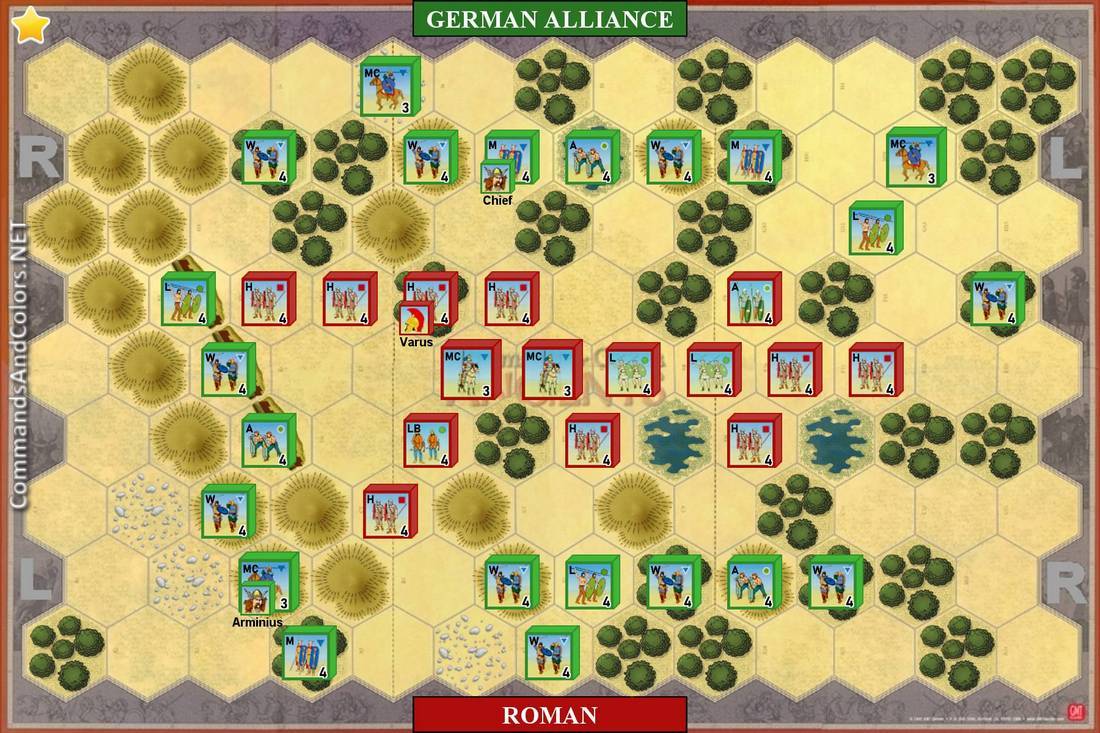 Special Rules
Command Rules: A Leader attached (stacked with) a friendly unit may cancel one sword hit on the unit in lieu of canceling a retreat hit.
Arminius may cancel both a sword and a retreat hit if stacked with a friendly unit.
A unit involved in close combat with the support of a Leader may only count one helmet hit amongst those rolled to inflict a hit on an opposing unit. Units supported by Arminius may count up to two helmets however. Varus may only support a Roman unit he is stacked with in combat—he cannot support adjacent units.
Roman Command Cards: The Roman Player starts the game with two command cards—he draws an extra command card at the end of his 2nd Player-turn bringing his hand to three cards, and he draws another extra command card at the end of the 4th Player-turn bringing his hand to four cards for the remainder of the scenario.
Line Commands in the Scenario: No more than six units can be moved by play of a single Line Command Card in the scenario for both sides Roman and German.

Retreat and Evasion & Player Orientation: (these rules were added due to the unique layout, ferocity, & character of this battle)
a)    Retreats: Units in this game, if retreated due to a flag result, only retreat one hex if infantry, or one or two hexes (owner’s choice) if cavalry units per flag result inflicted and not ignored or canceled. Retreats may be in any direction (if a two hex retreat, however it must end 2 hexes away) as long as the retreat route does not pass adjacent to an enemy unit—units may never retreat through or into hexes adjacent to enemy units.
b) Evasion: Roman units in the game may never attempt evasion if attacked in close combat. German units may evade in any direction if allowed to evade per the rules, but the hexes they evade into or through may not be adjacent to Roman units--German units may never evade through or into hexes adjacent to enemy units.
Leaders if they evade/retreat and survive, evade simply into the nearest hex occupied by a friendly unit (owner picks if two or more friendly units equidistant). They may evade through hexes adjacent to enemy units. (or even through enemies see standard rules).
c) Orientation: The Left and Right sections of each Player depend on where he is sitting. Its suggested that the Roman Player sit on the side closest to the “A” hexrow—the German Player close to the “I” hexrow.

German Elite Warriors: All German medium infantry units are treated as Warriors for all purposes, they are Elite Warriors—in addition they receive one extra dice the very first time in the scenario they battle back or engage in close combat as long as the unit still has three or more blocks.

Exiting Roman Units/Leaders from the Map:
Roman units/leaders located on any mapedge hex numbered “1” (in other words A1, B1 , C1 through to H1 & I1 on that mapedge) may exit the map if ordered to move in lieu of taking a normal on-map move. Each Roman unit/Leader exited in this way scores the Roman Player 1 Banner.