Historical Background
Following the catastrophe at the Teutoburger Wald, Augustus dispatched a series of punitive expeditions into Germany. In 14 AD, Tiberius became emperor and assigned his adopted son Germanicus Julius Caesar to the German province. In AD 16, Arminius decided the time had come to destroy another Roman army. He deployed his Germanic army to ambush Germanicus at a point in a plain between a forest and a deep, broad stream. His infantry waited behind an old boundary rampart while he deployed his cavalry in the woods, waiting to charge out onto the Roman rear. Germanicus was a far better tactician than Varus. He scouted well and did not fall for the trap, sending auxiliary infantry into the forest to occupy the German cavalry while his legions attacked the ramparts. The first Roman attempt at the ramparts was repulsed, so Germanicus ordered forward his engines and light troops to soften up the Germanic position. The second attack broke through the rampart and the Germans behind the ramparts fled. The battle then shifted to the woods where the fighting went on until dusk. Arminius withdrew in the darkness and the Roman cavalry pursuit was indecisive. Germanicus had won a tactical victory with little strategic impact. Arminius had survived with a depleted but intact army to continue the fight. In the following year, the Emperor Tiberius decided to abandon Germany and fix the limit of the Roman Empire at the Rhine. Roman expansion was at an end, and the Germanic tribes remained free, with dramatic implications for the future of Europe.
The stage is set. The battle lines are drawn and you are in command. The rest is history. 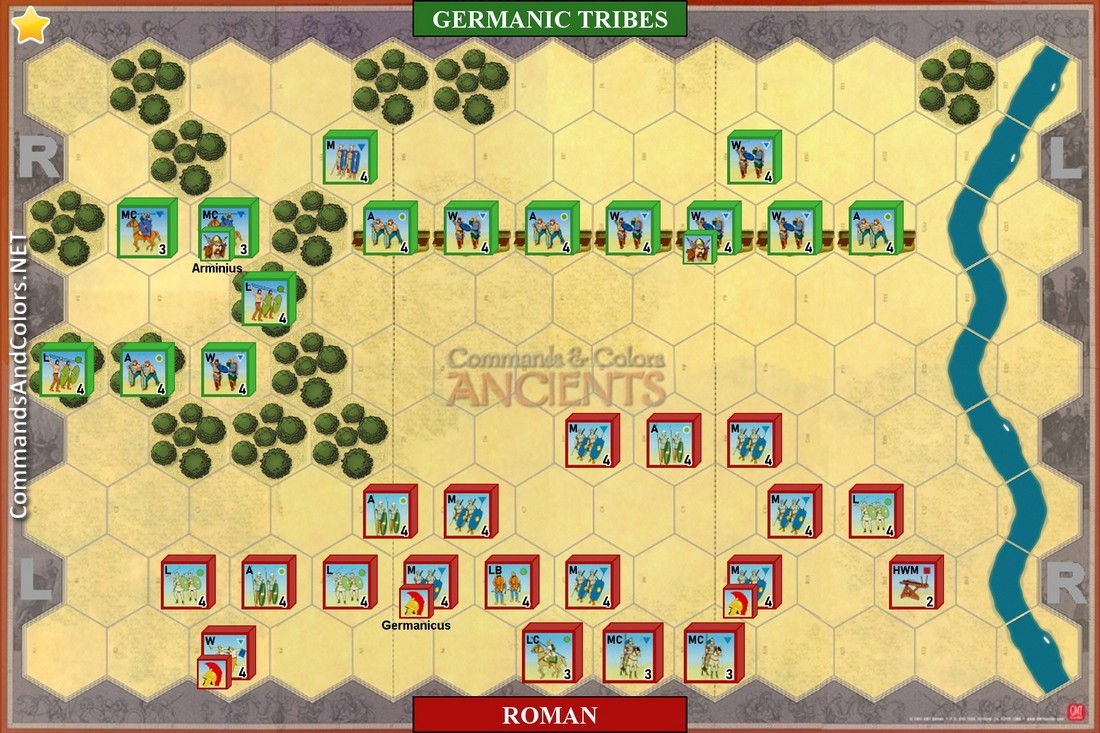 Special Rules
• The Roman player gains one Victory Banner for each rampart hex a Roman unit occupies and holds. A maximum of two banners may be gained.

clavain replied the topic: #4487 1 month 2 weeks ago
6-4 Germans. Romans had mostly dribs and drabs of move two or three left, right or centre cards and order light troops, so were pretty much forced into a grinding assault into the woods on their left, and were ahead 4-1 at one point, until Arminius played Mounted Charge, broke through and rescued the day before the Roman medium cav could engage. Fun scenario with options for the Romans (me) if the cards had come out better.

• The Roman player gains one Victory Banner for each rampart hex a Roman unit occupies and holds. A maximum of two banners may be gained.

Sorry - the statement could have been written in detailed as follows:

Note that only a maximum of two Victory Banners may be gained by Roman units that occupy rampart hexes.

The Roman player maintains the Victory Banner as long as the unit remains on the rampart hex (is holding the hex).

I tried to search in internet to find official written rules from GMT and/or R. Borg, but I was unable to find any.

It woudl be good if other players would show with their idea.
Polonus100 replied the topic: #3805 1 year 10 months ago
I don't think so. As in CCN should be gained after withstanding enemy's Turn and possible counterattack, at the begining of the next Roman turn. So "holds" means here "holds enemy response" and is the necessary condition to gain VB.

Mark-McG replied the topic: #3804 1 year 10 months ago
The Roman player gains one Victory Banner for each rampart hex a Roman unit occupies and holds. A maximum of two banners may be gained.

there is a little ambiguity around this condition, but I read it as a banner is gained immediately a Roman unit occupies a Rampart hex, and is held for as long as a Roman unit remains in the hex.

mk20336 replied the topic: #2436 4 years 10 months ago
And the last game of our recent mini-campaign. Despite the odds shown on website, Romans prevailed hitting hard into the center of the rampart with Double Time: 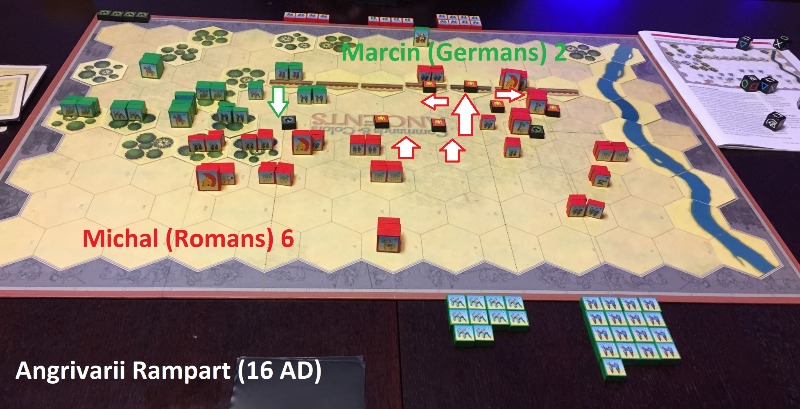