Roman Civil War
The Battle of Forum Gallorum 43 BC 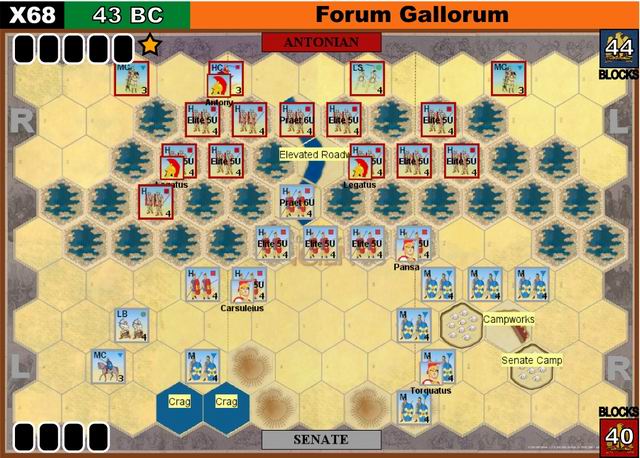 Scenario Special Rules:
Command Rules:
The “Marian” Command Card Deck
Historical Note: Combat in the 1st Century BC between Roman Legions was somewhat different than the wars between civilized states in the 3rd Century BC. There was less room for combined arms tactics and maneuver, and battles probably tended to be more of the nature of hand to hand full bore slugfests.
This particular scenario utilizes a different Command Card Deck than the original C & C Ancients Deck. Eight (8) Cards are removed from the original deck leaving 52 Cards for scenario play. This new deck is called the “Marian Deck” and it is named after Caesar’s uncle Gaius Marius who reorganized the Roman Legions in roughly 105-103BC (several years before Caesar was born) to meet the challenges of the Germanic Tribal invasions that threatened the Roman Republic of the time.
The following eight cards are removed before play and put aside to create the Marian Deck:
X4 “Order Light troops”, x1 “I Am Spartacus”, x2 “Move-Fire-Move”, x1 “Mounted Charge”---note that one Mounted Charge” card is still retained in the deck.

Leader Command, Anthony, & Rally Special Rules:
Antony can cancel both a retreat and a sword hit if present with the unit receiving such hits. All other Leaders may cancel a retreat or a sword hit if present with the unit.
Units on both sides involved in close combat or battleback with the support of a Leader may only count one helmet hit amongst those rolled to inflict a hit on an opposing unit, unless Antony is the supporting leader---then up to two helmet hits may be counted.
Leaders may only support in close combat or battleback in the scenario units they are stacked with, except Antony he can support units adjacent to his location.
Units and the Rally Card: No unit can be rallied to beyond five blocks or its strength at the start of the game whichever is less. If a Player rolls “swords” when attempting to rally he may freely chose which unit gets a block back.
Line Command Limit:
No more than six (6) foot units can be ordered by play of a single Line Command Card in a given player-turn.

Roman Legionary Infantry Rules:
The following types of infantry units in the game on BOTH sides are assumed to be Roman Legionaries: Heavy Infantry, and Medium Infantry. ALL of these units are
considered to be Roman Legionary Infantry. The combatants in this era of civil war often recruited non-citizens from different areas of the Roman Republican Empire into their Legions and as a result the quality of such forces varied widely.
Roman Pilum:Each Roman Legionary Infantry unit starts with a Pilum Marker. The Pilum is a one-time use weapon that is generally fired right before a Roman Legionary unit attacks in close-combat or is itself attacked by the enemy in close-combat. Once the pilum is fired (or lost see below) –the Pilum marker is removed from the Roman unit to indicate that the pilum has been expended and the unit may not throw Pilum for the rest of the battle.
Just before a Roman unit with pilum is attacked or is itself attacked by the enemy for the very first time in the battle in close-combat it throws its pilum—roll one die and apply normal hits for swords, color, or a Flag/retreat hit Afterwards remove the Pilum marker.
The Senate Medium Infantry units, however, do not hit on ‘swords’ when throwing pilum.
The act of throwing the pilum is not considered to be part of the Close-Combat—so any result of the pilum throw is resolved before the Close-combat. If two Roman Legionary Infantry units that have not thrown pilum yet engage the attacker resolves his pilum throw first. An attached Leader may use his special ability to cancel a “swords” hit that was inflicted via a pilum hit (see special Command rules) on the unit he is stacked with.
Roman units, adjacent to the enemy, that have not expended their Pilum may also be ordered to throw Pilum if the card “Darken the Sky” is played by their commanding player. The ordering Player picks one adjacent enemy unit and throws two dice –apply the results just as one would before close combat—and remove the Pilum Marker.

Roman Relief Moves & Cohort Maneuvers:
Adjacent and on the same side Roman Legionary Heavy Infantry, instead of moving, may switch places in a “Relief/Cohort Maneuver”. Relief/Cohort Maneuvers may only be conducted through the play of Section cards ONLY. Instead of ordering one unit via a section card, the controlling Player may order a pair of adjacent Legionary Heavy Infantry units to switch hexes—at least one of the units switching places must not be adjacent to an enemy unit. A unit that switched places via the Relief/Cohort Maneuver into a hex adjacent to the enemy may close combat in the same player-turn. The Senate Medium Infantry units may not utilize this rule since they are actually very recent recruits

Senate Recruit Levy-Legionary Medium Infantry: The Medium Infantry in the game represents the recent recruits the Senate was able to levy for the campaign against Anthony—Treat as normal Legionary Medium Infantry, but for the following changes:
1) In their battle-back they only roll three dice normally—not the normal four dice
2) The first swords result they roll in an individual combat roll is always ignored in close-combat or battle-back—treat as a miss. Apply the second and subsequent normally in all such combat situations.
3) They cannot execute or participate in Relief/Cohort Maneuver Moves.
4) They never hit on swords when throwing pilum.
Missile Ranges & Effectiveness in Forum Gallorum:
a) Archers and Slingers only have a range of 2 hexes in this scenario—and may missile fire at adjacent enemy units.
b) An ordered unit may either missile fire or conduct close-combat in a turn—never BOTH.
c) The Antonian Slinger unit hits on swords when missile firing at Medium or Light enemy foot units.

Terrain Special Rules:
Marsh: Foot units must stop when they enter a marsh hex and may only enter a marsh hex when ordered from a starting hex directly adjacent to the marsh hex moved to. Mounted units and Leaders moving alone pay 2 MP for only the first Marsh hex entered during that move. Close-combat and Battle-Backs into or out of a marsh hex is at a “normal” 3 dice maximum (with any of the normal + for cards). Marshes do not block
line of sight. Units located in Marshes do not count for ‘support’ for preventing retreat by adjacent units and cannot receive support themselves from adjacent units when in a marsh hex. Cavalry units in Marsh hexes may not evade if attacked in close-combat, and retreat one hex less than normal per Flag if their retreat started from a Marsh hex.
Senate Campworks: Senate foot Units occupying Campworks hextiles that are not in an outflanked condition Battle-back with one extra dice and may ignore the first Flag result inflicted upon them. Campworks tiles are removed (and the hex reverts to clear terrain) when an opposing unit enters the hex for any reason. Campworks block line of sight.
Senate Camp: For combat and removal the Senate Camp Tiles are treated exactly like campworks—the only effective difference is that the Antonian player receives four blocks credit toward victory for each Senate Camptile removed from the map.
Elevated Roadway: Close-combat or Battle-back into or out of an Elevated Roadway hex tile is always one less die than normal when conducted between Elevated roadway hexes or between Clear and Elevated Roadway hexes. Units in Marsh hexes may not close-combat into an Elevated Roadway hex although they could battle-back into such hexes if attacked from them—these battle-backs & the original attack into the marsh from the roadway is at the normal 3 dice maximum for marshes (with any of the normal + for cards). Elevated Roadway blocks the line of sight, but does not inhibit movement.
Crags: These two hexes are impassable
Hills: Use normal rulebook rules.
Senate Campworks Building: Senate Medium Infantry units in a clear terrain hex stacked with a Leader and ordered by a Section Card may in lieu of moving and attacking can instead “dig in “ a Campworks tile. The ‘dig in’ option is not permitted if the Senate Medium Infantry unit in question is adjacent to an enemy unit. Place a Campworks tile in the hex that ‘dig in’ occurred at the end of that Senate player-turn. A maximum of two such ‘dig in’ options in two clear hexes may occur per game.
Octivian’s & Antony’s Elite Praetorian Heavy Infantry Cohorts: The sole Elite Praetorian Heavy Infantry (6 block) unit in each of the opposing armies may ignore the first Flag result inflicted upon it from missile fire, close-combat, or battle-back.
OB Notes: Each Legionary unit in the game represents from one to three cohorts. Anthony had two crack Legions engaged (20 Cohorts), and probably a separate double-strength Elite Praetorian Cohort so he starts with 11 Legionary Heavy infantry units in the scenario plus some cavalry, of which he had a surplus, in support. The consul Pansa, who was mortally wounded in the battle, entered the marsh with a total of 15 Cohorts and had behind him an additional force of at least one to two Legions of new levies. Another Senate Legion (the other veteran one that had also deserted Anthony) arrived with other consul Hirtius at the end of the fight to save the day.