Historical Background
After the death of Mithridates VI The Great, his youngest son Pharnaces was allowed by Pompey to be the ruler of the Pontic Bosporan Kingdom in the Crimea. With the Romans occupied fighting their Civil War, Pharnaces took the opportunity to expand his kingdom by invading Armenia Minor and Cappadochia. Caesar, after recently securing Asia Minor before leaving for Egypt had left Gnaeus Domitius Calvinus in command with the veteran 36th Legion. Calvinus recruited two fresh legions from native troops along with a legion of Roman colonists from Pontus. Calvinus advanced to meet Pharnaces at the city of Nicopolis. Pharnaces dug two parallel trenches running from the city walls and deployed his infantry between them with his flanks beyond the trenches protected by his superior numbers of cavalry.
Calvinus deployed the 36th legion on his right, the colonists on his left and his native troops in the centre. The 36th legion swept away the Pontic left wing, but the Colonist Legion was held up in the trenches and the native centre collapsed almost immediately when the Pontics attacked. The veteran 36th was then surrounded and they had to fight their way out as the rest of the Roman army routed. After his victory, Pharnaces went on to capture his fathers old Pontic Kingdom. Caesar would have to deal with Pharnaces personally at the battle of Zela.
The stage is set. The battle lines are drawn and you are in command. Can you change history? 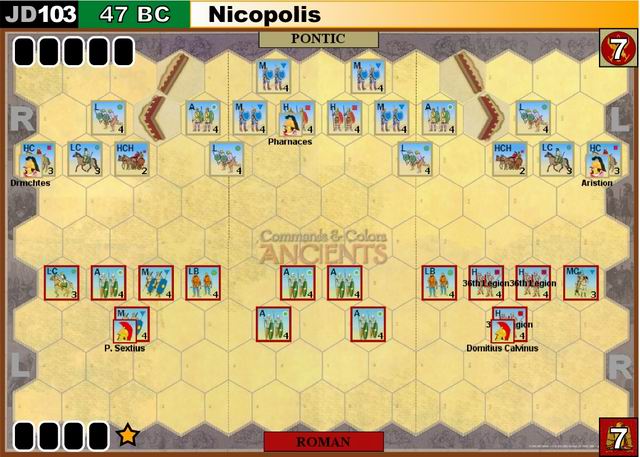 Special Rules
The ramparts represent shallow trenches. Treat them as fordable rivers for all game purposes.

NICOPOLIS – 47BC
The Pontic army is the same as in the official GMT battle of Zela that occurred not long after this battle. Whatever troops Pharnaces gained or recruited after his victory I am assuming he lost through battles to capture and suppress cities and in garrisoning his new conquests. The Pontics are described as deploying their infantry in the centre between shallow trenches and their cavalry on the flanks beyond. The Description of the Roman army in the sources is quite good. A veteran legion (heavy inf) deployed on the right, two locally raised native legions that performed poorly in the centre (Aux inf), and a legion raised from Roman settlers in Pontus on the left. These must have had some military experience and so are a mixture of medium and Aux infantry. Some light auxiliaries were raised along with a small contingent of cavalry. Easy peasy lemon squeezy!