Historical Background
In early 45 BC Caesar was on campaign in southern Spain against the sons of Pompey and their local Pompeian partisans. One son Sextus held the town of Corduba on the Baetis with a garrison, and Caesar attempted to cut the bridge into the town by crossing the Baetis river and setting up his own fortified bridgehead down-stream from the town. The other son of Pompey, Cnaeus, from his camp outside the town, built a line of fieldworks in response to Caesar’s line of works in order to contest and eventually maintain control of the bridge and his line of communications into Corduba.
“As a result of this intrenched race, a series of skirmishes occurred for the possession of the bridge. Skirmishes near by were a daily occurrence, in which neither side could boast the upper hand. But it is evident that finally, about January 20, Cnaeus broke down Caesar’s defenses by an attack in force and fought his way to the bridge. The battle here was desperate. The legionaries fought hand to hand. Hundreds perished not only by the sword but by falling from the bridge into the river. ‘On either side were heaps of slain’. Despite stout fighting it seems clear Caesar was defeated. Cnaeus gained the bridge and his entrance to Corduba. Caesar stayed on awhile, hoping to force Pompey to an open field engagement which might terminate the war; but finding that he could not bring him to battle on advantageous terms, he gave up hope of capturing Corduba, and, as a long siege was not advisable, he drew off his forces….” (From T.A. Dodge’s Caesar pages 701-703) 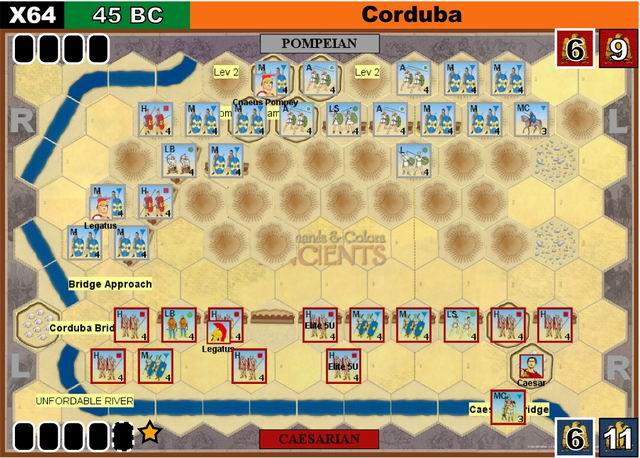 Entry to the Town of Corduba: Hex C1 ---This hex can only be entered by Pompeian units—Caesar’s units cannot enter or attack in any way into this hex—although they could battle-back if attacked from that hex.
Bridge hexes—Caesar’s Bridge and the Corduba Bridge—Units attacking via close-combat or battle-back into or out of a Bridge hex do so at –1 dice from normal. Units may freely enter/leave bridge hexes from/to any adjacent hex that is not unfordable river.
Corduba Bridge Approach Hex: This hex is considered a Level 0 clear hex—therefore it has no effect on combat, but is important for scoring a banner.
Level 1 and Level 2 Hill Elevations: The map now, in effect, has contour lines of hexes showing different elevations. Basically there are three Terrain elevations in the scenario: Level 0: which includes all clear, bridge, and broken terrain on the map. Level 1: which includes all Level 1 Hills, and Level 2 which includes all Level 2 Hills. Note: The Camp/Rampart tiles are a special separate case which are handled by the rule detailed below.
Elevation effect on close-combat and battle-back: If a unit is close-combating or battling-back against a unit at a higher elevation (or level) the “normal” maximum dice that unit may use is minus one (-1) normal.
. If a unit is close-combating or battling-back against a unit at a lower elevation (or level) the “normal” maximum dice is used. If both units are on the same level and there is no other terrain considerations the units would use their standard dice as dictated by the rulebook and these scenario rules.
Camp & Rampart Tiles: The initial Camp/Rampart Tiles only benefit their initial owners. If these hexes are entered by enemy units the Camp/Rampart tile is removed from the map—and replaced if a Pompeian work with the appropriate hill level tile. The Caesarian works become clear terrain whenever they are removed since they were built on a lower level next to the Baetis River and are therefore considered at Level 0.
Use the other normal Camp/Rampart rules as detailed in the rulebook—Pompeian works in hexrows H & I are considered to be at Level 2 and are replaced with Level 2 Tiles if taken—all others are Level 1 save hex E3 which is considered to be Level 0. Close-Combat (& battle-back) into or out of intact works never considers the underlying elevation of the works when calculating the dice used in the combat. Only use the underlying elevation rules detailed above once the works are removed by enemy occupation.

Command Rules:
The “Marian” Command Card Deck
Historical Note: Combat in the 1st Century BC between Roman Legions was somewhat different than the wars between civilized states in the 3rd Century BC. There was less room for combined arms tactics and maneuver, and battles probably tended to be more of the nature of hand to hand full bore slugfests.
This particular scenario utilizes a different Command Card Deck than the original C & C Ancients Deck. Eight (8) Cards are removed from the original deck leaving 52 Cards for scenario play. This new deck is called the “Marian Deck” and it is named after Caesar’s uncle Gaius Marius who reorganized the Roman Legions in roughly 105-103BC (several years before Caesar was born) to meet the challenges of the Germanic Tribal invasions that threatened the Roman Republic of the time.
The following eight cards are removed before play and put aside to create the Marian Deck:
X4 “Order Light troops”, x1 “I Am Spartacus”, x2 “Move-Fire-Move”, x1 “Mounted Charge”---note that one Mounted Charge” card is still retained in the deck.

Leader Command, Caesar, & Rally Special Rules:
Caesar can cancel both a retreat and a sword hit if present with the unit receiving such hits. All other Leaders may cancel a retreat or a sword hit if present with the unit.
Units on both sides involved in close combat with the support of a Leader may only count one helmet hit amongst those rolled to inflict a hit on an opposing unit, unless Caesar is the supporting leader---then up to two helmet hits may be counted.
Caesar when moving & ordered by himself without an attached unit normally may move up to four hexes instead of the regular three hexes for Leaders in the rulebook.
Units and the Rally Card: No unit can be rallied to beyond five blocks or its strength at the start of the game whichever is less. If a Player rolls “swords” when attempting to rally he may freely chose which unit gets a block back.

Army Special Rules:
Roman Trained Pompeian Auxillia Legions: These units have normal capabilities, and may also engage in Roman Relief Moves & Cohort Maneuver with each other and Pompeian Legionary units.
Caesarian Veteran Initiative:
Up to Two Caesarian Heavy Infantry units per Caesarian Player-turn that are ordered by an “Order Heavy Troops” card may move two hexes and close combat at their option.
Missile Ranges & Effectiveness in the Combat of Corduba:
a) Archers and Slingers only have a range of 2 hexes in this scenario—and may missile fire at adjacent enemy units.
b) Pompeian Auxillia & Light Infantry only have a range of one hex in this scenario—and may missile fire at adjacent enemy units.
c) Missile fire directed through Rampart hexsides at units located on the Rampart tile or at units located in a fortified camp hex is always at a maximum of one die regardless of whether the firing unit has moved or not.
d) An ordered unit may either missile fire or conduct close-combat in a turn—never BOTH.

Outflanking
This is an easy way of introducing facing and flanks to the game with little fuss—it can be retrofitted to other scenarios where appropriate: Unit is said to be “Outflanked” if it is surrounded in all six adjacent hexes by either enemy units, or hexes adjacent to an enemy unit. The presence of friendly units or impassable terrain does not negate an “Outflanked” situation in any way. Units on the board edges (and not surrounded by six adjacent hexes) cannot be “Outflanked”. Effects of being Outflanked: “Outflanked” units when battling back roll only half the normal number of dice they would be normally entitled to rounded up—to a maximum of only two dice—“Outflanked” units when battling back never hit on helmet rolls even if supported by a leader. A unit’s “Outflanked” situation is judged at the instant it battles back.

USE THE FORUM TO DISCUSS ABOUT THIS SCENARIO