Historical Background
Following his victory over Pharnaces at Zela, Julius Caesar returned to Rome where a crisis was brewing – the surviving veterans had grown very war-weary and were refusing orders to deploy overseas yet again. Caesar’s personal appeal sparked a renewal of loyalty to their magnetic leader, and the crisis was averted. Opposition awaited in North Africa. Pompeian forces under Porcius Cato Minor and Metellus Scipio had fled to Africa and joined forces with Attius Varus and King Juba. Caesar directed his next campaign against these Pompeian and allied Numidian forces. Once Caesar had transported his entire army to Africa, he set off with a sizeable force on a foraging expedition. They had only gone a few miles when a much larger enemy force of Numidian cavalry and light troops deployed for battle to his front. The Numidians were commanded by Titus Labienus, formerly Caesar’s deputy in Gaul and his opponent at Dyrrhachium and Pharsalus. The enemy formation and tactics were quite novel to Caesar. The Numidian cavalry was interspersed with light infantry and would rush forward to throw their javelins. When the Romans charged, the enemy would retire. Meanwhile, the exposed Roman flanks were pelted by other enemy units. As the battle progressed, because of their numbers, the Numidian cavalry had almost surrounded Caesar’s troops. Caesar countered by forming his line back to back and gradually retired toward his camp. At this point in the battle, the Numidians grew stronger yet when Marcus Petreius arrived with elite cavalry and more Numidian infantry. True to his nature, Caesar encouraged his utterly exhausted troops to make one last effort to drive the enemy back. The Roman attack succeeded, allowing them to withdraw. Caesar had lost nearly a third of his detachment and gained a healthy respect for his adversaries.
The stage is set. The battle lines are drawn and you are in command. The rest is history. 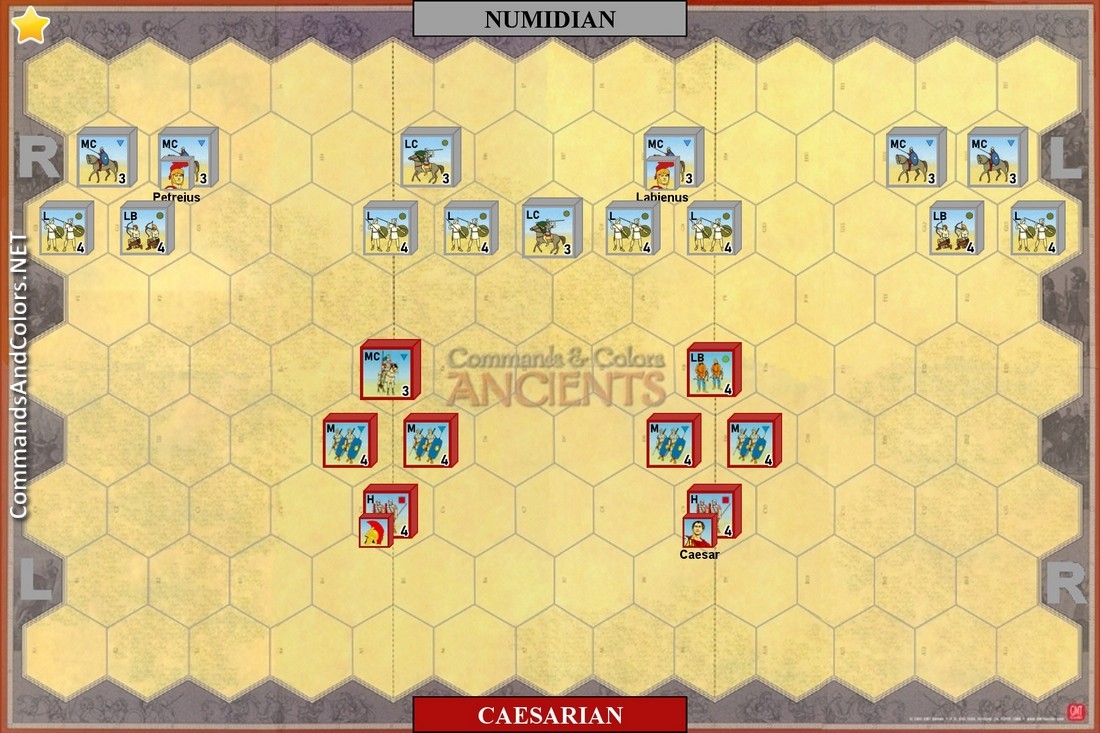 Special Rules
• Julian Legions rule is in effect for the Romans.
• Julius Caesar Rule is in effect.
• A Roman unit or leader that exits off the Numidian side of the battlefield each counts as one Victory Banner. The unit and/or leader is removed from play.

mk20336 replied the topic: #2084 5 years 7 months ago
Medium Cav charge in first round dispatched caesarian LB and MC. After some evades, 3 Numidian MCs focused on Caesar, and despite losses managed to grab a 5-2 win!
Read More...