Historical Background
King Juba of Numidia continued to support the Pompeians, even after Varus’ defeat at Utica. Curio led his Caesarian army after Varus, catching up with him at the Bagradas River. Curio attacked and routed the demoralized Pompeian army, and Varus was wounded. Curio learned that Juba had sent another Numidian force as reinforcements and sent his cavalry on a night raid against the enemy’s camp along the Bagradas River that accomplished little except to alert the Numidians to the Romans’ presence. Thinking the Numidian force was none too large, since Juba was not present, Curio decided to attack this force as well. Juba had been detained by a border dispute and Saburra was in command. Saburra, stung by his loss earlier at Utica, was not going to be caught unawares again. He placed his entire force under arms. At the same time his force was increased to army size by the arrival of Spanish and Gallic cavalry sent by Juba. Unknown to Curio, Saburra now commanded the bulk of the entire Numidian army. Foolishly, Curio launched an attack on this much larger Numidian force. Curio’s main weakness was his lack of cavalry – the same weakness that had resulted in disaster to another Roman army in the same area much earlier (the Roman army of Regulus, largely destroyed by the Carthaginians in 253 BC). Though Curio’s infantry fought well, their advance simply made it easier for the Numidian cavalry to surround the Romans. In desperation, Curio ordered his men to move toward a small hill but Saburra’s forces got to the hill first. It was a slaughter, and Curio committed suicide rather than surrender. Africa would remain a Pompeian stronghold.
The stage is set. The battle lines are drawn and you are in command. The rest is history. 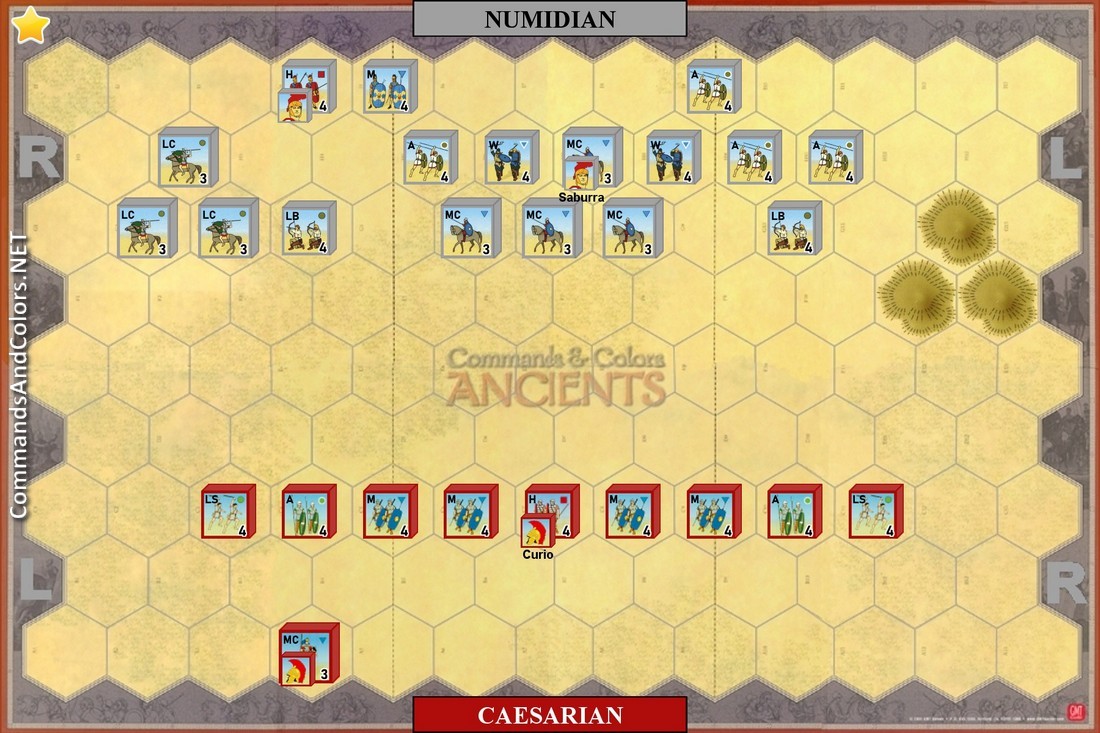 Special Rules
• Julian Legions rule is in effect for both armies