Historical Background
The First Triumverate of Crassus, Pompey and Julius Caesar collapsed soon after Crassus was defeated and killed by the Parthians at Carrhae in 53 BC. With Crassus gone, the rivalry between Pompey and Caesar steadily grew until civil war erupted in 49 BC. After “crossing the Rubicon” with his troops, and violating Roman law, Caesar drove Pompey out of Italy in a lightning campaign. He then marched on Spain to confront “an army without a leader” - the Pompeian army there. Meanwhile, Caesar sent his general, Gaius Curio, with an army consisting mostly of newly raised legions to attack the Pompeian forces under Attius Varus in Africa. Varus was in camp below the walls of Utica. Curio marched to engage him there. While Curio was fortifying his camp, news arrived that a large force of horse and foot was approaching. This army had been sent by King Juba of Numidia to reinforce Varus. It was commanded by Juba’s general Saburra. Curio immediately sent his cavalry to delay the approaching enemy. Juba’s Numidian forces were taken by surprise, as they were not expecting an attack. The Numidian cavalry was quickly put to flight and many infantry were killed before they too routed. What started as a mere delaying action escalated into a victory that surprised even Curio.
The stage is set. The battle lines are drawn and you are in command. The rest is history. 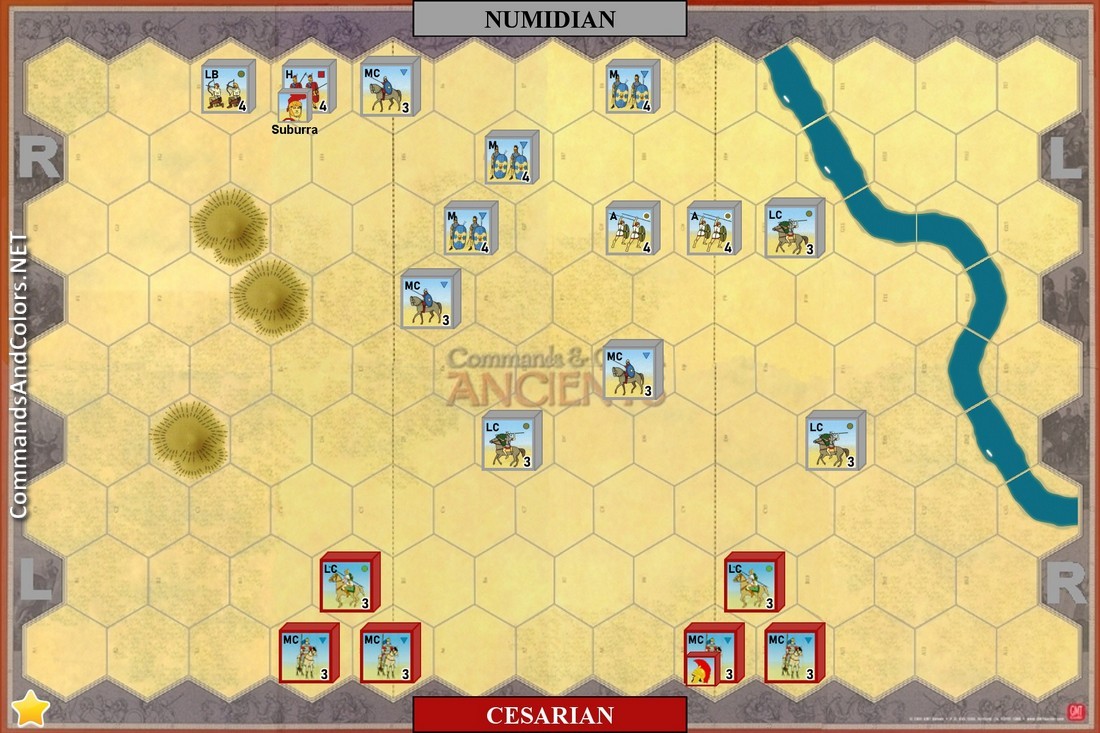 Special Rules
• Utica - Delaying Action is best played as a solo engagement, where you are in command of both sides. Only the Roman side, however, will have a hand of Command cards. The Numidian Army, to order units, will roll 2 dice at the start of its side’s turn instead of playing a Command card. The dice roll will determine the type of units that are ordered. The Roman player has the freedom to determine which unit of each type is ordered or selected.
◊ Green circle, will order any one green unit to move and combat.
◊ Blue triangle, will order any one blue unit to move and combat.
◊ Red square, will order any one red unit to move and combat.
◊ Leader helmet, will order leader and if he is attached to a unit, the unit is also ordered to move and combat.
◊ Flag, one unit is selected to retreat a full move. The Roman player may freely select any one unit, even a unit that has its retreat path blocked, occupies a mapedge hex or will retreat into a mapedge hex with movement remaining.
◊ Crossed Swords, one block is removed from any one selected unit.
As might be expected, the Numidians will be at a severe disadvantage in this battle. They will have none of the advantages conferred by the Command cards, and will be limited to movement, combat, retreat or block loss, depending on the dice rolls.

The Numidians then rolled two flags and that was the battle over.

I think it was historically accurate.

Since it's set up I'll give it a couple more plays.