Historical Background:
(From Chapters 34 and 35 of Caesar’s The Civil War Commentary) “There was…a valley between the two armies. It was not very big, but the sides were difficult and steep to climb. Each waited for the forces of the other to attempt to cross, so that they themselves could join battle in the more favorable position. All at once, on the left wing of Publius Attius ( Varus’ Army), all the cavalry, mingled with a good many light-armed infantry, came into view going down into the valley. Curio sent the cavalry and two cohorts of Marrucini to meet them. The enemy cavalry failed to withstand the first onset, but gave their horses rein and fled to their own forces; abandoned the light-armed troops who had charged with them were surrounded and killed by our own men. All Varus’ army turned to watch, and saw them fleeing and being cut down. Then Rebilus, one of Caesar’s lieutenants, whom Curio had brought with him from Sicily….said, “You see the enemy terrified Curio; why hesitate to make use of your opportunity ?”Curio paused only to tell his soldiers to remember their avowal of the previous day, then ordered them to follow him and charged at their head. The going in the valley was so difficult that those in front could not clamber out easily without help from their comrades below. However, the minds of Attius’ men were taken up by their own fear, and with the rout and slaughter of their comrades, and they had no thought of resisting; indeed, they all believed they themselves were already surrounded by the cavalry. And so, before a javelin could be hurled or our men could get any nearer, the whole of Varus’ army turned tail and fled back to camp. “ “During the retreat, a certain Fabius, a Paelignian from the very lowest ranks of Curio’s army, caught up with the head of the retreating column and began looking for Varus, calling him loudly by name, so as to appear to be one of his men who had something to tell him. Varus, hearing his name called several times, stopped and asked the man who he was and what he wanted; Fabius then aimed a blow with his sword at his exposed arm and very nearly killed him; Varus, however, escaped by lifting his shield to parry the blow. Fabius was then surrounded and killed by the troops who were nearest.” “ The fleeing troops were so numerous and so disordered that they blocked the gates of the camp and obstructed the way. More men die there, without being wounded, than perished in the actual battle or the retreat and they were very nearly driven out of the camp as well…However the nature of the ground and the fortifications of the camp denied Curio’s men access, and besides they had marched out to give battle, and did not have with them the necessary equipment for an assault on a camp. Curio therefore led them back to camp. His only casualty was Fabius; on the other side, about six hundred were killed and a thousand wounded. On Curio’s departure, all these wounded, and many others pretending to be wounded left (Varus’) camp in fear and withdrew to the town (Utica). Varus observed this and realized his men were thoroughly demoralized; and so, leaving a trumpeter and a few tents for appearance’s sake he led the rest of the army into the town in silence in the small hours of morning.” 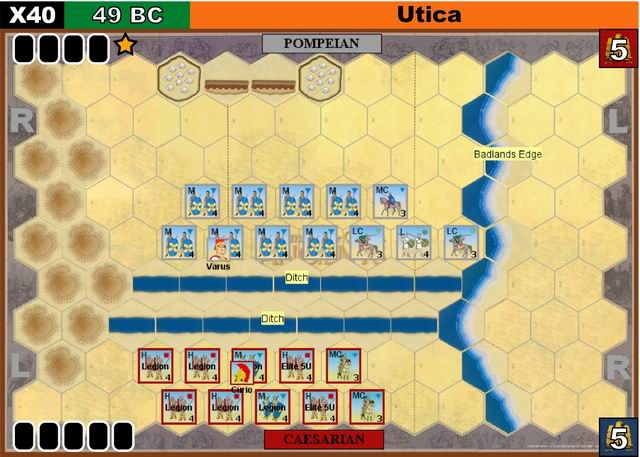 Victory: Both sides win on 5 Banners
The Caesarian side also scores one banner for each camp hex they ente
The Pompeian camp hex is removed instantly leaving clear terrain when entered by the enemy.

Special Rules:
Command Rules:
The “Marian” Command Card Deck
Historical Note: Combat in the 1st Century BC between Roman Legions was somewhat different than the wars between civilized states in the 3rd Century BC. There was less room for combined arms tactics and maneuver, and battles probably tended to be more of the nature of hand to hand full bore slugfests.
This particular scenario utilizes a different Command Card Deck than the original C & C Ancients Deck. Eight (8) Cards are removed from the original deck leaving 52 Cards for scenario play. This new deck is called the “Marian Deck” and it is named after Caesar’s uncle Gaius Marius who reorganized the Roman Legions in roughly 105-103BC (several years before Caesar was born) to meet the challenges of the Germanic Tribal invasions that threatened the Roman Republic of the time.
The following eight cards are removed before play and put aside to create the Marian Deck:
X4 “Order Light troops”, x1 “I Am Spartacus”, x2 “Move-Fire-Move”, x1 “Mounted Charge”---note that one Mounted Charge” card is still retained in the deck.

Leader Command & Rally Special Rules:
Curio can cancel both a retreat and a sword hit if present with the unit receiving such hits. The other Leader in the scenario Varus may cancel a retreat or a sword hit if present with a friendly unit.
Units on both sides involved in close combat with the support of a Leader may only count one helmet hit amongst those rolled to inflict a hit on an opposing unit.
Units and the Rally Card: No unit can be rallied to beyond six blocks or its strength at the start of the game whichever is less. If a Player rolls “swords” when attempting to rally he may freely chose which unit gets a block back.

Roman Pilum:
Each Roman Legionary Infantry unit starts with a Pilum Marker. The Pilum is a one-time use weapon that is generally fired right before a Roman Legionary unit attacks in close-combat or is itself attacked by the enemy in close-combat. Once the pilum is fired (or lost see below) –the Pilum marker is removed from the Roman unit to indicate that the pilum has been expended and the unit may not throw Pilum for the rest of the battle.
Just before a Roman unit with pilum is attacked or is itself attacked by the enemy for the very first time in the battle in close-combat it throws its pilum—roll one die and apply normal hits for swords, color, or a Flag/retreat hit Afterwards remove the Pilum marker. The act of throwing the pilum is not considered to be part of the Close-Combat—so any result of the pilum throw is resolved before the Close-combat. If two Roman Legionary Infantry units that have not thrown pilum yet engage the attacker resolves his pilum throw first. An attached Leader may use his special ability to cancel a “swords” hit that was inflicted via a pilum hit (see special Command rules) on the unit he is stacked with.
Roman units, adjacent to the enemy, that have not expended their Pilum may also be ordered to throw Pilum if the card “Darken the Sky” is played by their commanding
player. The Player picks one adjacent enemy unit and throws two dice –apply the results just as one would before close combat—and remove the Pilum Marker.

Pompeian Army Special Rules:
Pompeian Army Raw Legions: All Pompeian Medium Infantry in the scenario battle-back with only three dice normally.
Numidian Cavalry: All Pompeian Light Cavalry move and retreat three hexes in this scenario rather than the normal 4 hexes.

Pompeian withdrawal from the map:
Pompeian units and/or Leaders located on the mapedge hexes from I3 to I8 (inclusive) may voluntarily exit the map in lieu of the Pompeian Player issuing an order to a unit/leader in that section via a section card only. Once Pompeian units or Leaders exit they may never return to play.

Varus’ Panicked Withdrawal: Once per game, in lieu of playing a card for the his player-turn the Pompeian Player may declare a general retreat---immediately retreat all foot units one hex, and all mounted units, including leaders two hexes---the retreats may be carried out in any order by the Pompeian Player in order to have units avoid each other and open retreat routes—follow the normal retreat rules otherwise. After the move is complete remove all pilum markers from the Pompeian Legionary units.

Special Terrain Rules:
Ditch Tiles: Units in ditch hexes when engaged in close combat attack and battle-back at one dice less than normal unless the unit they are engaged with is also in a ditch hex. The ditch hexes do not inhibit movement, save that it costs a cavalry unit 2 MP rather than 1 MP to move from a ditch to a non-ditch hex. Units located in Ditch hexes may never evade.
Badlands and the Badlands Edge: The Badlands edge hextiles located on the right hand of the Caesarian army and the left hand of Varus’ Pompeian force represents the start of some “very bad” desert terrain that runs from the edge tiles to the closest mapedge of the board. All hexes on the Badlands edge and beyond (say hexes C11 and D12 and the like) are considered to be rough inhospitable desert terrain. Units & Leaders entering Badlands hexes must cease moving upon entering the first Badlands hex entered during movement
–Units that enter a Badlands hex may not close-combat or missile fire in the same player-turn. Combat in Badlands hexes is treated as Broken terrain for all other purposes.
Outflanking---This is an easy way of introducing facing and flanks to the game with little fuss—it can be retrofitted to other scenarios where appropriate:
A unit is said to be “Outflanked” if it is surrounded in all six adjacent hexes by either enemy units, or hexes adjacent to an enemy unit. The presence of friendly units or impassable terrain does not negate an “Outflanked” situation in any way. Units on the board edges (and not surrounded by six adjacent hexes) cannot be “Outflanked”.
Effects of being Outflanked: “Outflanked” units when battling back roll only half the normal number of dice they would be normally entitled to rounded up—to a maximum of only two dice—“Outflanked” units when battling back never hit on helmet rolls even if supported by a leader. A unit’s “Outflanked” situation is judged at the instant it battles back.