Caesar vs Labienus
The Battle of Ruspina 47 BC

Historical Background:
“Labienus was riding up and down in the front line bareheaded, cheering on his own men as he did so, and occasionally addressing Caesar’s legionaries like this: “ What do you think you’re doing rookie? Little fire-eater aren’t you ? Are you another one who’s had his wits fuddled by his nibs’s (meaning Caesar) fine talk ? I tell you, he’s brought you into a desperate situation. I’m sorry for you”Then a (Caesarian) soldier said, “I’m no raw recruit, Labienus; I’m a veteran of the Tenth (Legion)”. “I don’t recognize the standards of the Tenth”, Labienus replied. “You’ll soon be aware what sort of man I am”, said the soldier. As he spoke, he threw off his helmet, so that he could be recognized by Labienus, then aimed his javelin at him and flung it with all his might. He drove it hard full into the chest of Labienus’s horse and said, “Let that show you, Labienus, that it’s a soldier of the Tenth who attacks you”.(From “The African War” relating an incident from the Battle of Ruspina. The author is unknown to history but the story is believed by some historians to be written by one of Caesar’s junior officers with an eye towards an audience made up of Caesar’s political base back in Rome)

Expanded Map Setup:
The Ruspina scenario uses an extended two section map to better allow the maneuvers and movements of this “skirmish style” battle between the mainly light and heavily cavalry Numidian allied & Roman Pompeian mercenary force led by Labienus and the almost totally medium to heavy legionary force under Caesar’s control. Take a second C & C Ancients map and cut or fold it over lengthwise along the entire center of the “E” hex-row. The two maps are then abutted so that D1 on the now “half-map” is adjacent to A1 and A2 on the main full map; similarly D12 will end up adjacent to A12 and A13 on the main map. The play area is now 13 hexrows deep and 12 or 13 hexes wide depending on the hexrow. The main or full map is referred to as” Map 1” and the four row or half map is called:” Map 2” when charting the locations detailed below. 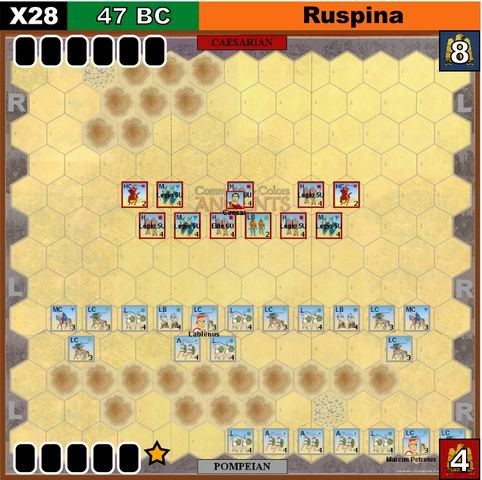 *The Command Card “I Am Spartacus” cannot be part of either player’s initial hand.

Victory:
Caesarian Player: 8 Banners—score 1 Banner per enemy Leader/unit eliminated also can score Banners by exiting units from the map (see special rules for restrictions) 1 Banner is scored per two Legionary units exited and 1 Banner if Caesar is exited, other Caesarian units may exit but do not score Banners for such exit.
Pompeian Player: 4 Banners—Score 1 Banner per Caesarian Legionary or Leader eliminated and a ½ Banner each for eliminating any other Caesarian units.
If the battle ends (see special rules) without either player getting to the proper Banner score the battle is considered to be a draw.

Special Scenario Rules:
Command Rules:
All Pompeian Leaders may cancel a retreat or a sword hit if present with the unit.
Units on both sides involved in close combat with the support of a Leader may only count one helmet hit amongst those rolled to inflict a hit on an opposing unit, unless Caesar is
the supporting leader---then up to two helmet hits may be counted.
Units and the Rally Card: No unit can be rallied to beyond six blocks or its strength at the start of the game whichever is less. If a Player rolls “swords” when attempting to rally he may freely chose which unit gets a block back.
Leader Movement Capabilities: Pompeian Leaders ordered to move by themselves may move up to four Hexes. Caesar ordered to move by himself may move up to five hexes.
The End of the Battle/ End of the Day
The Play of the scenario can be cut short before victory by either side, the battle-day starts from the initial set-up and ends when the cards are due to be reshuffled for the second time during play (either due to play of “I am Spartacus” or just running out the draw deck-a Counterattack card played immediately after “I am Spartacus” merely mimics that order and does not reshuffle the deck once more). The battle may also end once all Caesarian units and leader have exited the map or been eliminated, although voluntary exits from the map are not permitted until after the first card reshuffle.

Caesarian Special Rules:
The Caesar Redraw:
Up to three times per game the Caesarian Player may in lieu of taking a player-turn discard three cards into the discard pile and pick three new cards from the available draw pile. This option may not be carried out during the first two Caesarian player-turns of the game, on consecutive Caesar player-turns, or if Caesar is no longer on the map.
Caesarian Cavalry Special Rally Back:
Once per game the Caesarian Player may decide to bring back at his option one eliminated two block Heavy Cavalry unit back into play. At the start of any friendly Player-turn in which an “Order Heavy Troops or “I am Spartacus” card is played by the Caesarian return one eliminated Caesarian Heavy Cavalry to play in any vacant clear hex not adjacent to the enemy within three hexes of the Caesar Leader unit, no return to play is possible if Caesar is not on the map. The Pompeian Player still retains the ½ Banner scored from when the cavalry was eliminated originally (and could even score again if the unit is eliminated a second time).

Caesarian Voluntary Map Exit:
Caesarian units and the Caesar Leader unit may voluntarily leave the map (return to their camp near the town of Ruspina) by exiting from hexes I9 to I12 inclusive on the mapedge of Map 1. Units/Leader that start their own player-turn occupying the mapedge exit hexes & that are ordered by the Caesarian Player may voluntarily exit the map at the player’s option. Voluntary exits from the map are not permitted until after the first card reshuffle and Caesarian units may also not be ordered via normal movement, or voluntary evasion to enter hexes within 2 hexes of a mapedge exit hex until after the first card reshuffle, although the Caesarian units/leader could retreat due to Flag results into hexes within 2 hexes of the mapedge exit hexes before the first card reshuffle.
Certain Caesarian units and the Caesar Leader unit score banners if they voluntarily exit, but a forced Leader evasion off the map by Caesar never scores a banner and units may not satisfy Flag results by retreating off-map—follow the normal rules in such cases.
Caesarian Legionary Special Rules & Units:

Roman Pilum:
Each Caesarian Heavy & Medium Infantry unit starts with a Pilum Marker. The Pilum is a one-time use weapon that is generally fired right before a Caesarian unit attacks in close-combat or is itself attacked by the enemy in close-combat. Once the pilum is fired –the Pilum marker is removed from the Caesarian unit to indicate that the pilum has been expended and the unit may not throw Pilum for the rest of the battle.
Just before a Caesarian unit with pilum is attacked or is itself attacked by the enemy for the very first time in the battle in close-combat it throws its pilum—roll one die and apply normal hits for the color, swords, or a Flag/retreat hit Afterwards remove the Pilum marker. The act of throwing the pilum is not considered to be part of the Close-Combat—so any result of the pilum throw is resolved before the Close-combat and may affect the number of dice available in the upcoming close combat.
Caesarian units, adjacent to the enemy, that have not expended their Pilum may also be ordered to throw Pilum if the card “Darken the Sky” is played by their commanding player. The Caesarian Player picks one adjacent enemy unit and throws two dice –apply the results just as one would before close combat—and remove the Pilum Marker.

Caesarian Veteran Initiative: Up to Two Roman Heavy Infantry (and/or Elite Heavy Infantry) units per Roman Player-turn that are ordered by Line Commands or an “Order Heavy Troops” card may move two hexes and close combat at their option.

Pompeian/Numidian Special Rules:
Pompeian/Numidian Tactical Limitations: African Army: The Pompeian Army is assumed to be a typical African force mainly oriented towards skirmish tactics, In Close Combat and Battle Back ALL Pompeian/Numidian units make no hits on their enemies if Swords are rolled—always consider Swords to be a ‘miss’ when rolled by the Pompeian Player.

Pompeian Cavalry/Leader Evasion: All Leaders & Cavalry Units from the Pompeian/Numidian Force may, throughout the scenario, evade in other directions in lieu
of towards their own mapedge. Such “other than to mapedge evasions” may not be made into hexes adjacent to Roman units. “Other than to mapedge evasions” may not be executed if the Pompeian unit is “outflanked” (see below)—but outflanked Pompeian Cavalry and Leaders may still evade as long as the direction is towards their map-edge as normal. Pompeian Cavalry when executing retreats as a result of Flag hits may only retreat toward their mapedge per the normal rules.

Historical Notes & Sources:
Our ancient sources differ as to whether Ruspina was a victory for Caesar. Certainly during the battle his army was in grave danger of losing its morale and ending up being skirmished to death by an elusive foe. The partisan author of “The African War” indicates that Caesar held the field at the end of the day by pushing their disorganized and by then supposedly at least partly leaderless enemy off a hill before returning to the camp at Ruspina. Dio Cassius tells a rather different tale—that many Caesarian soldiers were killed and that the survivors made a stand on some high ground and would have been wiped out if both Petreius and Labienus themselves had not been wounded. Appian calls the fight a rout for Caesar and states the pursuit was abandoned when Labienus’ horse was wounded and threw him. The scenario is set up so any of these possibilities could be worked out and represented, at least to some extent, on the map—the actual truth of the battle might even be somewhere in between. Perhaps the battle was a draw with one or both of the Pompeian leaders out of the fight, but their polygot army otherwise undefeated, and Caesar for his part being forced to withdraw to his camp with an army intact, but under great pressure after some hours spent skirmishing on the plain.
Caesar’s Army according to “The African War” was a pickup force of some 30 cohorts of Legionary infantry (three Legions in other words), 400 Cavalry (Probably Germans and/or Gauls), and just 150 archers, in all maybe 9-11,000 men. The same source estimates (or exaggerates) the Pompeian/Numidian forces in the area at some 40,000 or more including about 10,000 cavalry, but likely not all the Pompeians potentially available actually fought in the battle, and some of them seem to have arrived on scene while the battle was already in progress.