Historical Background:
“Finally Pompey decided to try to overwhelm Caesar’s numerically inferior army. He formed a line of battle on the plain between the two opposing camps. Caesar at once advanced to fight. With his left flank resting securely on the steep bank of the Enipeus River, he realized that the chief danger lay on his right, where his cavalry was outnumbered….by Pompey’s horsemen. He formed his legions in the customary three lines, but held out six cohorts—about 2,000 men to cover his right rear. He extended the intervals between the cohorts of his main body to match the frontage of Pompey’s army, drawn up in normal formation….Caesar took his own post initially with the 6 cohorts—the so-called “Fourth Line” –on the right rear.”
“His dispositions completed, Caesar ordered his first two lines of infantry to attack the motionless army of Pompey. At the moment of impact, Pompey launched his cavalry, supported by archers and slingers, against Caesar’s small contingent of horse. These fought stubbornly, but were forced back….At the decisive moment, Caesar personally led his selected force of 6 cohorts against the flank of Pompey’s advancing horsemen. Scattering the surprised cavalry, the small contingent pushed on, slaughtering the archers and slingers, then turned against the flank of Pompey’s main body. Caesar then galloped to join his third line, which he led through the intervals…to smash the front of the Pompeian legions…Pompey and his army fled to their camp. Caesar followed, stormed the camp…pursued the fugitives. Pompey fled in disguise; reaching the coast with only 30 horsemen, he embarked on a vessel and sailed to Egypt (where he was murdered upon stepping ashore by one of his former Centurions at the behest of the Egyptian royal court)
In this decisive battle, Caesar lost 230 killed and perhaps 2,000 wounded. Pompey lost 15,000 killed and wounded and 24,000 prisoners”
(the above was lifted largely, with some modifications, from The Encyclopedia of Military History by R.E. and T.N. Dupuy) 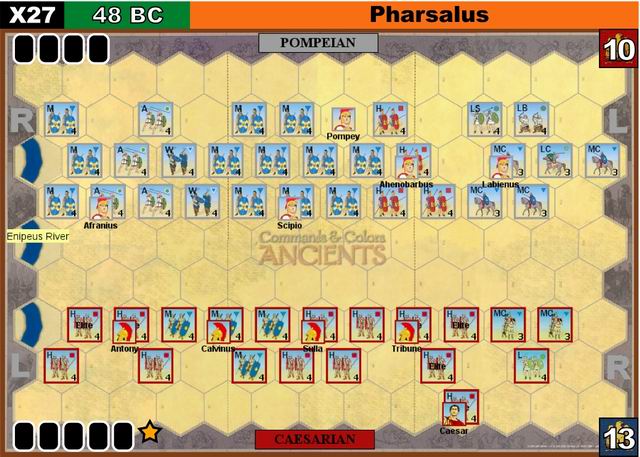 Order of battle notes:
Caesar deployed 80 cohorts (or eight Legions at 10 cohorts per Legion), Pompey 110 cohorts (or 11 Legions). Pompey also had a substantial superiority in cavalry and light troops although many modern-day historians believe that Caesar publicly overestimated the size of Pompey’s forces and understated the numbers of his own troops for better propaganda effect back in Rome. Certainly Caesar’s troops were far better man for man and unit vs. unit since they were well provided with a veteran Legion cadre and the vast combat experience derived in the Gallic Wars

(one of these cards is a Line Command one, the other four are chosen randomly)
Move First

Victory & Scoring Banners:
Banners are scored normally except: The Pompeian Player receives 3 Banners rather than the normal one for eliminating Caesar. The Caesarian Player gets 2 Banners for eliminating Pompey, and scores a ½ Banner only for each Pompeian Light Archer or Light Slinger unit eliminated.
Victory for the Pompeians is a score of 10 Banners
For Caesar Victory is 13 Banners

Special Scenario Rules:
Command Rules:
The “Marian” Command Card Deck
Historical Note: Combat in the 1st Century BC between Roman Legions was somewhat different than the wars between civilized states in the 3rd Century BC. There was less room for combined arms tactics and maneuver, and battles probably tended to be more of the nature of hand to hand full bore slugfests.
This particular scenario utilizes a different Command Card Deck than the original C & C Ancients Deck. Eight (8) Cards are removed from the original deck leaving 52 Cards for scenario play. This new deck is called the “Marian Deck” and it is named after Caesar’s uncle Gaius Marius who reorganized the Roman Legions in roughly 105-103BC (several years before Caesar was born) to meet the challenges of the Germanic Tribal invasions that threatened the Roman Republic of the time.
The following eight cards are removed before play and put aside to create the Marian Deck:
X4 “Order Light troops”, x1 “I Am Spartacus”, x2 “Move-Fire-Move”, x1 “Mounted Charge”---note that one Mounted Charge” card is still retained in the deck.
Leader Command, Caesar, Pompey& Rally Special Rules:
Caesar can cancel both a retreat and a sword hit if present with the unit receiving such hits. All other Leaders may cancel a retreat or a sword hit if present with the unit.
All Leaders, save the army commanders: Caesar and Pompey,may only support units involved in close-combat or Battle-back if they are directly stacked with the unit. Caesar and Pompey are the only leaders in the game that can project such support one hex away from their location per the normal rules.
Units on both sides involved in close combat with the support of a Leader may only count one helmet hit amongst those rolled to inflict a hit on an opposing unit, unless Caesar is the supporting leader---then up to two helmet hits may be counted.
Caesar when moving & ordered by himself without an attached unit normally may move up to four hexes instead of the regular three hexes for Leaders in the rulebook.
Units and the Rally Card:. No unit can be rallied to beyond five blocks or its strength at the start of the game whichever is less. If a Player rolls “swords” when attempting to rally he may freely chose which unit gets a block back.

Roman Legionary Infantry Rules:
The following types of infantry units in the game on BOTH sides are assumed to be Roman Legionaries: Heavy Infantry, Medium Infantry, Warrior, and Auxillia—note that the latter two types are only featured on the Pompeian side. ALL of these units are considered to be Roman Legionary Infantry. The combatants in this era of civil war often recruited non-citizens from different areas of the Roman Republican Empire into their Legions and as a result the quality of such forces varied widely.

Roman Pilum:
Each Roman Legionary Infantry unit starts with a Pilum Marker. The Pilum is a one-time use weapon that is generally fired right before a Roman Legionary unit attacks in close-combat or is itself attacked by the enemy in close-combat. Once the pilum is fired (or lost see below) –the Pilum marker is removed from the Roman unit to indicate that the pilum has been expended and the unit may not throw Pilum for the rest of the battle.
Just before a Roman unit with pilum is attacked or is itself attacked by the enemy for the very first time in the battle in close-combat it throws its pilum—roll one die and apply
normal hits for swords, color, or a Flag/retreat hit Afterwards remove the Pilum marker. The act of throwing the pilum is not considered to be part of the Close-Combat—so any result of the pilum throw is resolved before the Close-combat. If two Roman Legionary Infantry units that have not thrown pilum yet engage the attacker resolves his pilum throw first. An attached Leader may use his special ability to cancel a “swords” hit that was inflicted via a pilum hit (see special Command rules) on the unit he is stacked with.
Roman units, adjacent to the enemy, that have not expended their Pilum may also be ordered to throw Pilum if the card “Darken the Sky” is played by their commanding player. The Player picks one adjacent enemy unit and throws two dice –apply the results just as one would before close combat—and remove the Pilum Marker.

Pompeian Army Special Rules:
Historical Note: As mentioned above much Pompey’s Army was of far lower quality than that of Caesar’s. Pompey had raised the bulk of his forces in Asia and Greece for the Civil War, in consequence his Legions lacked the combat experience and cohesion of the Caesarian side. Some of Pompey’s Legions were little more than cohorts that had been cobbled together from different recruiting sources.

Pompeian Auxillia (Cilician Legions): These units have no missile capability save that granted by the Roman Pilum rules above.
Pompeian Warriors (Spanish Cohorts): Ignore all the normal Warrior rules—these units are considered to be Medium Infantry for movement and combat & retreat purposes, however they close combat and battle back with only three dice normally.

Caesarian Army Special Rules:
Caesarian Veteran Initiative:
Up to Four Caesarian Heavy Infantry units per Caesarian Player-turn that are ordered by Line Commands or an “Order Heavy Troops” card may move two hexes and close combat at their option.

Caesarian Elite Legions
Note that six of the initial Caesarian Heavy Infantry units start the game with five blocks rather than the normal four blocks. These are Caesar’s crack troops, they are treated as normal Heavy Infantry for all other purposes, but have the advantage of an extra block and may rally back to a full five block strength through use of a rally card