Historical Background
After his defeat at Pharsalus, Pompey fled to Egypt where his former general Gabinius had left a garrison almost a decade earlier. But the Romans had gone native, and Egypt was wracked by civil war between the resident Ptolemy XIII, and the absent Cleopatra VII. Ptolemy, in an attempt to win favour with Caesar, had Pompey murdered. Caesar immediately headed for Alexandria to sort the situation out. With only 3,800 troops he got a hostile reception. He took Ptolemy as hostage, whereupon an Egyptian army of 20,000 descended on Alexandria and attacked. Into this chaos arrived the charismatic Cleopatra, wrapped in a carpet, and ready to appease a frustrated Caesar. Lovestuck, Caesar reinstated Cleopatra as Queen. The Egyptians were furious, and despite the release of Ptolemy, the fighting continued. Caesar appealed for help from his ally Mithridates I of Pergamum. Mithridates collected auxilliaries from Asia Minor, Syria and Palestine, and approached the Nile. Ptolemy took his army to face Mithridates, who was reinforced by Caesar, and formed a strong position with hills, marshes, and the Nile covering three sides of his camp, and a fortified village in front. Ships on the Nile with missile troops provided him covering fire. Caesar overan the village before being stopped at the camp ramparts. With the Egyptians focused to their front, Caesar sent a force of Romans, commanded by Carfulenus, into the unprotected hills flanking the camp. With their position turned, the Egyptians routed and Ptolemy died. Caesar marched triumphantly into Alexandria, and installed Cleopatra as Queen.
The stage is set. The battle lines are drawn and you are in command. Can you change history? 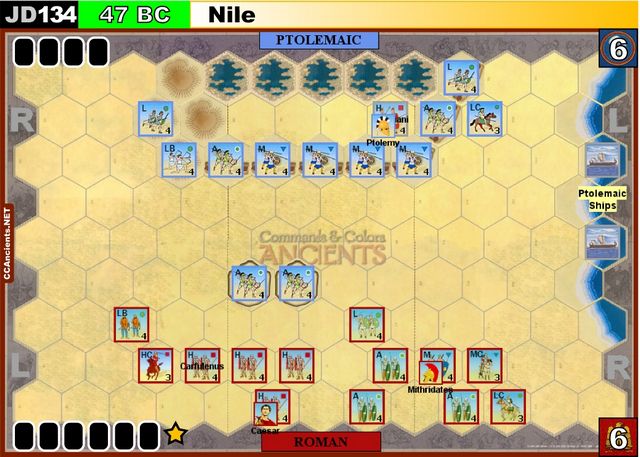 Special Rules
The Julian Legions rule is in effect for Marian Roman heavy infantry units only.

The Julius Caesar Rule is in effect.

The Roman Carfulenus unit will score a hit for each leader symbol rolled in close combat, and may ignore one flag. Mark it with a special unit block.

For each Roman unit that begins its turn on a hill or rampart hex, that player is awarded a victory banner. The banner is lost if the unit leaves the hex.

Treat the Ptolemaic ships as Heavy Foot Untis and represent them with a War Machine block. They may never be attacked, move, or close combat. When ordered they may only missile fire at a range of up to 3 hexes.

Warboard replied the topic: #3893 1 year 7 months ago
6:3 victory for Rome. Though they didn't get to shoot, I really liked the opportunity to put some ships on the board. The scenario was great fun!
Read More...