Battle on the plain

This is the most basic of all the scenarios. The challenge here was how to give a smaller but more elite cavalry force an edge over a larger one. Command or leader advantage were options but they create a greater imbalance than I was wanting…..the battle raged all day and I’m guessing they were pretty evenly matched. The key here, I think, is that Caesar’s German cavalry were  concentrated and organised and used focused force against a more numerous but less organised enemy. I’ve simulated this by giving the two armies the same Command and leadership but mixing cavalry and infantry in the Gallic line, making it harder to order them effectively, and massing the Roman Medium Cavalry together, putting the leaders on dual section hexes and giving them first  move, which should give them an edge and model the historical battle better. I originally had the Gallic Medium Cavalry in the centre but found that it was easy for any first card play that ordered all the Roman Medium Cavalry, particularly Mounted Charge, to completely eliminate them. Putting all lights in the main line means the Gallic player has the option to evade and survive the first charge. As it stands the Roman Mediums can still attack the enemy Mediums on both flanks first turn but they’ll have to consider dividing their force, which could be very risky (more on Alesia Design Notes HERE).

Historical Background
After the escape of the Gallic cavalry, Caesar ordered the completion of the circumvallation and then the construction of a contravallation, a second line of similar fortifications fourteen miles long and facing outwards, in expectation of the arrival of a Gallic relieving force. Sure enough a huge relieving force of 250,000 did arrive under the command of Commius of the Atrebati,  a former ally of Caesar. Between the twin circles of their fortifications, the Romans were now both besiegers and besieged. Commius arrayed his massive army outside the contravallation, with the infantry encamped on hills and the cavalry on the open plain, interspersed with archers and other light troops. Caesar sent his smaller cavalry force out to engage the mixed force on the plain and a ferocious day long battle ensued.
“They had fought from midday till near sunset and the issue was still in doubt, when the German horse massed all their squadrons at one point, charged the Gauls, and hurled them back. When their cavalry broke and fled, the archers were surrounded and killed. The rest of our horsemen advanced from other points, pursued the fugitives right up to their camp, and gave them no chance of rallying.”  – Caesar, Commentarii de Bello Gallico
The stage is set. The battle lines are drawn and you are in command. Can you change history? 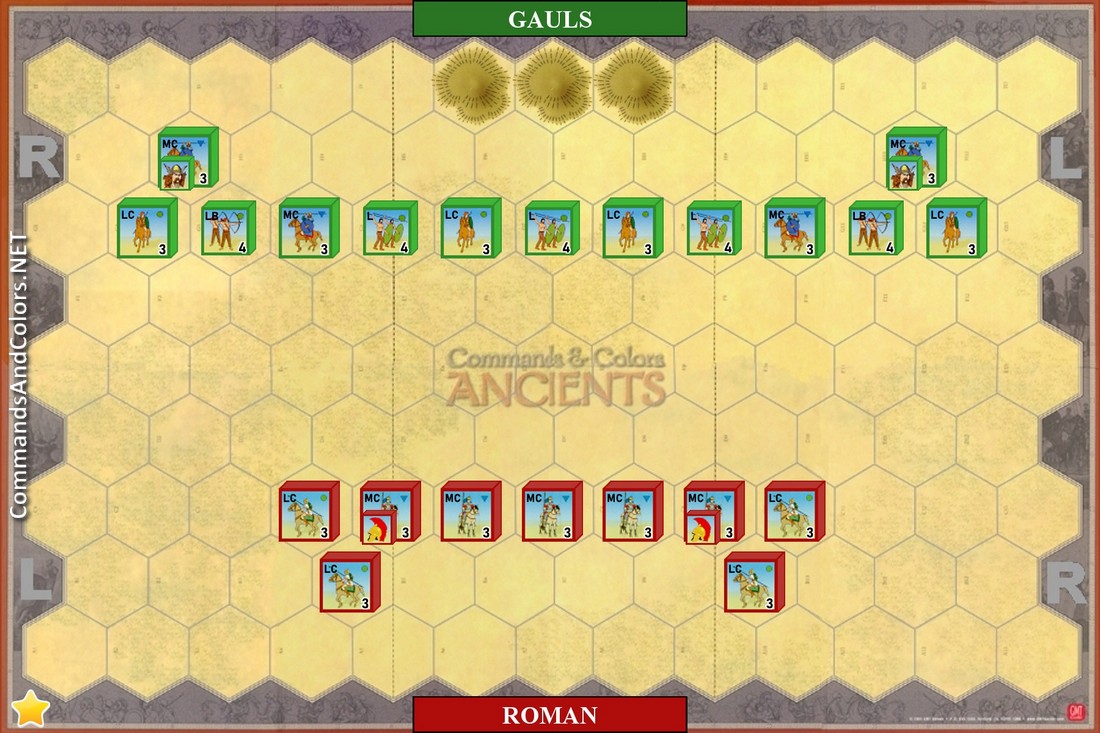 apergis1@verizon.net replied the topic: #3481 2 years 5 months ago
So far the most boring game in this series.
GF1954 replied the topic: #2723 4 years 1 month ago
2 solitaire games. Romans winning both 6 - 5, and 6 - 1. While the first game was a close contest, in the second, the Romans were able to advance their medium calvary immediately, and captured, with 3 lucky rolls, 3 banners of the Gauls before the Gauls had even a turn! They then turned on the Gaul flank, and made short work of them.
Read More...