I’ve taken some liberty with Caesar’s account here. He mentions no battle, only that the Gallic cavalry slipped out through the uncompleted fortifications in silence. I find it hard to imagine, with what was at stake, that Roman vigilance was so lax as to allow the enemy to pass unchallenged. The result was near disaster for Caesar’s army and I’ve postulated a skirmish, assuming he downplayed the event for his contemporary readers. I had originally allowed a banner for every Gallic unit crossing the Roman baseline but realised that the Gallic player would win the game with an opening draw of Move Fire Move. As it now stands the Gallic player drawing MFM can still get half way to victory first turn but seriously diminishes his force before the battle has even started….an interesting tactical dilemma for the Gallic general. This battle takes place at night and there was an early idea to reduce ranged attack effectiveness to simulate poor visibility but this was abandoned because of the extra unnecessary complexity it added. I have abstracted this into the lower Command for the Romans, which also takes into account the effect of surprise (more on Alesia Design Notes HERE).

Historical Background
After failing to disrupt the construction of the Roman fortifications and with supplies dwindling, Vercingetorix realised that he would need help if his army was not to be starved into submission.
“Vercingetorix now decided to send out all his cavalry in the night, before the Roman entrenchments were completed. He bade them go every man to his own country and impress for service all the men of military age. He pointed out how much they owed him and urged them to consider his safety; after all he had done for the cause of national liberty they ought not to abandon him to the cruel vengeance of the enemy………With these instructions the cavalry was sent out in silence through a gap in the entrenchments shortly before midnight.” - Caesar, Commentarii de Bello Gallico
The stage is set. The battle lines are drawn and you are in command. Can you change history? 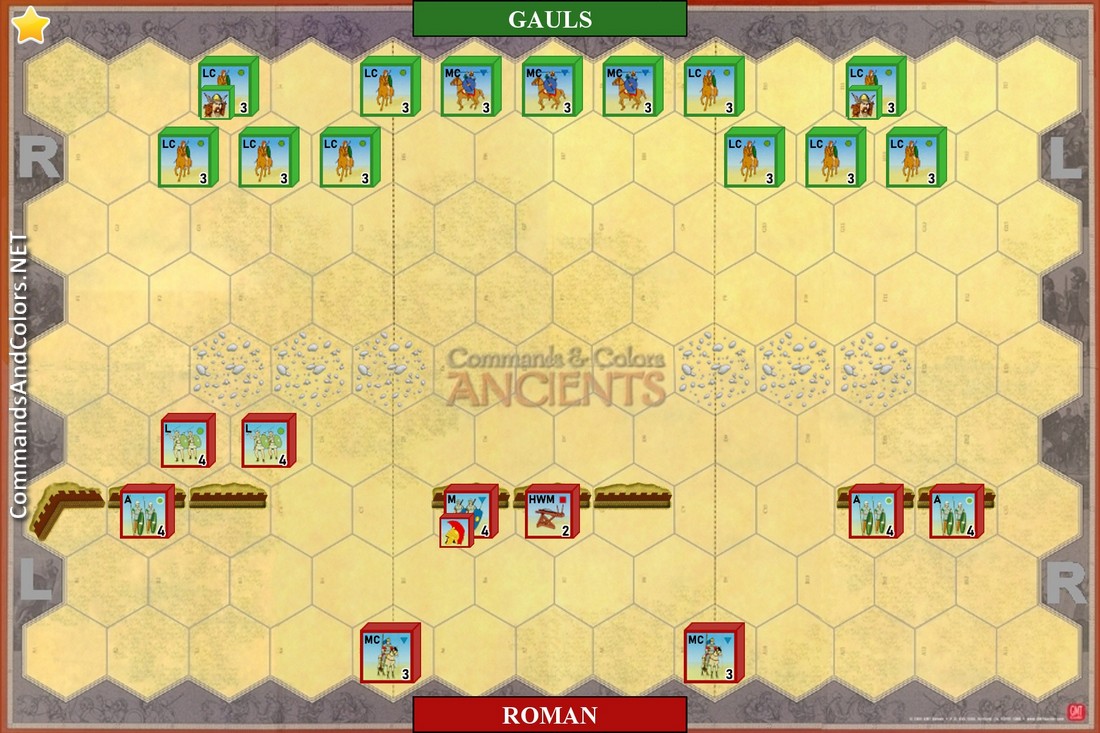 Special Rules
The Julian Legions rule is in effect.

apergis1@verizon.net replied the topic: #3480 2 years 5 months ago
My wife and I have been having fun playing this scenario. Easy to set up and it plays fast. Today we played three times and the Romans won every time. In the last game I was the Romans. The Gauls destroyed two Roman units so she removed three units of the board. She could not get the last Roman units and eventually I destroyed the sixth Gaelic unit. The fact that one only gets three banners for removing Gaelic units off the board puts them having to make some tricky decisions.
GF1954 replied the topic: #2713 4 years 1 month ago
2 solitaire games. Romans winning the first 6 - 5, and the Gauls winning the second 6 - 2. Balanced scenario, I believe.
Read More...