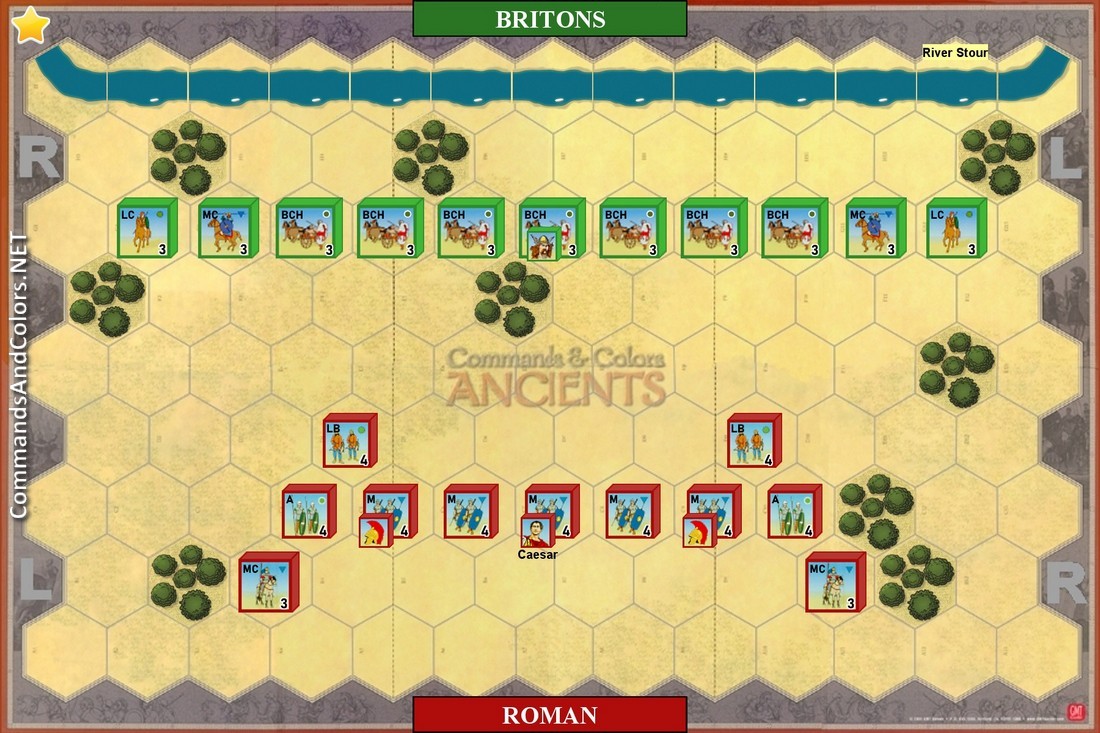 kostas63 replied the topic: #3154 3 years 2 months ago
Scenario equilibrato. I Romani avanzano decisi nel Centro ma i Britanni rispondono con la carta "Carica di Cavalleria +1" e ne spezzano l'avanzata uccidendo anche Giulio Cesare. I Romani riescono a compattarsi ma perdono per poco la battaglia. Vittoria dei Brittani per 6-5.
barmyfongyphipps replied the topic: #2634 4 years 6 months ago
The Britons attacked strongly on the right, and managed to turn the Roman left flank, leaving the Caesar unit swinging at thin air as it advanced boldly to meet the barbarians head-on. Playing Move-Fire-Move, the chariots then swung in behind deep across the Roman rear. Caesar and neighbouring infantry - too far advanced to help - could only watch the ensuing disaster unfold. Playing Mounted Charge, the Britons sandwiched the Roman centre-right against leader-led chariots from behind and chariots and cavalry from front in the centre-left sections. Some Romans made it to the safety of nearby woods, but many others were killed, surrounded on all sides. Only 14 cards played and the Britons won handsomely, 6-3.

g1ul10 replied the topic: #2249 5 years 2 months ago
Britons: 6 Romans: 2
The chariots hit and run strategy proved devastating for the Roman troops. The scenario was over before Caesar was able to engage the chariots laying in the bottom of the map.

TomKnight3 replied the topic: #2199 5 years 4 months ago
I played two games today. Not good. Lost both, once as the Romans and then as the Brits. I want to rematch for sure.

TomKnight3 replied the topic: #2154 5 years 5 months ago
In this rematch, I was now the Brits. I got a mounted charge early in the game (the whole game was just 7 turns) and hit the Roman left. I was able to do some fair damage though lost a unit of chariot. However, the Roman general on that side had to retreat to a calvary unit. One my next turn I was able to surround him and crush his unit, and him. I was then up 4/2. On my next turn I hit the Roman right and was able to pick off an archer and one more in the the Roman left. The game ended 6/2, making up my lost as Caesar several days before.

TomKnight3 replied the topic: #2147 5 years 5 months ago
The British chariots slammed full-steam into the Romans. At first it looked like the British were doomed. The Romans hit back cracking most of the British units. However, after learning how to do hit and run tatics, the British did better. The Romans had no line command or leadership cards and could never move forward in order. The Romans charged their calvary too soon, losing them. The Brits won 6/5 in a turn around game.
King-Billy replied the topic: #814 12 years 9 months ago
Watched my son (Daniel, Britons) play this yesterday. He and his opponent (Peter, Romans) picked it because of the unusual nature of the British forces.