Historical Background
Gaius Julius Caesar formed a political alliance with Gnaeus Pompey and Licinius Crassus that became known as the “First Triumvirate.” Caesar obtained the governorship of Gaul as a proconsul, and immediately set about expanding his province from the Mediterranean coast inland. In 58 BC, after many Belgic tribes had surrendered to Caesar, he marched north against the Nervii, the most powerful of these tribes. Joined by other lesser tribes, including the Atrebates and Viromandui, the Nervii horde massed on the north side of the river Sabis. Poor scouting by the Romans only detected some cavalry acting as a decoy, while the Nervii king Boduognatus concealed his main body in the woods, not far from their main camp. Only when the Romans had dispersed from their tactical formation and started to build their camp did the Belgic tribesmen charge from the woods. The surprise was complete. Caesar was caught off guard, but in true form, he set about immediately to rally his troops. The Romans quickly reformed—a testimony to his personal magnetism and to their training. This hurriedly assembled line held until the two legions that were marching with the baggage could come forward. These reinforcements, along with the famous Tenth Legion’s bold actions, and the vigor of his deputy Labienus, enabled the Romans to annihilate the Nervii army.
The stage is set. The battle lines are drawn and you are in command. The rest is history. 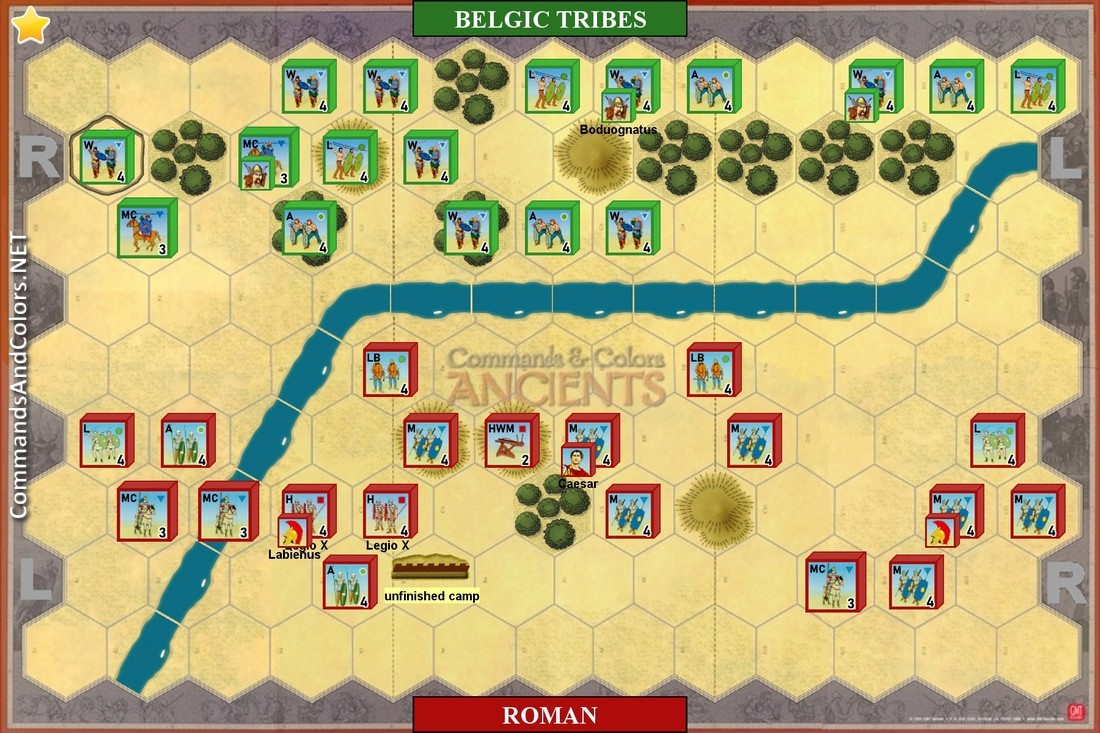 • The River Sabis is a fordable river.

clavain replied the topic: #4403 5 months 3 weeks ago
8-6 Romans. A cavalry attack on the Roman left was initially successful, but countered by Roman horse and Legio X, and then petered out into a stalemate after Legio X lost half its force. Gauls formed line behind the river after one initial attempt to cross, and the Romans formed line also, while Labeienus moved towards the camp with what was left of Legio X, countered by warriors and auxilia. Caesar took an arrow in the eye, and it became clear the Romans were going nowhere near the water, so with a I am Spartacus, two line commands and a Clash of Shields in reserve, the Gaul line went into the water for the final showdown. Sadly, that was the turn that Labienus and his one weakened Legio X unit broke through the weakeneed Gaul right and were a turn away from entering the empty camp, while the Gauls lost one unit in the water allowing a Roman win before they got the opportunity to play a Clash of Shields. Closer than expected, and fun. Some other dude will have to start a civil war and create the Empire.
alecrespi replied the topic: #313 14 years 3 months ago
FAQs present for this scenario. CLICK HERE to read.
Read More...