Historical Background
In the winter of 57 BCE, the understrength XII Legion took up winter quarters astride the Dranse River in the town of Octodurus (modern-day Switzerland), and began the task of fortifying the town as a prelude to opening the nearby St. Bernard Pass to Roman merchants and subduing the nearby Gallic tribes.
Having allowed nearby Gauls to occupy the part of the town opposite the Roman quarters on the other side of the river, Roman commander Servius Galba awoke one morning to the sight of the Gallic side abandoned overnight, and a large Gallic army marshaled on the nearby plain and investing the vacated town. Despite overwhelming numbers and against the advice of his subordinates, Galba decided to stay behind his partially completed fortifications and engage the enemy, which quickly became a fierce, all-day struggle as the Gauls first charged the Roman entrenchments and then settled in for a sustained long-range missile attack.
The turning point in the battle seems to have been a Roman sortie out of their entrenchments, which caused a rout of the Veragi and Seduni tribesmen, causing many Gallic casualties and putting the enemy to flight in disorder. The Roman force soon abandoned Octodurus due to a lack of supplies and control over the countryside, burning the village and retreated back down the valley.
The stage is set. The battle lines are drawn and you are in command. Can you change history? 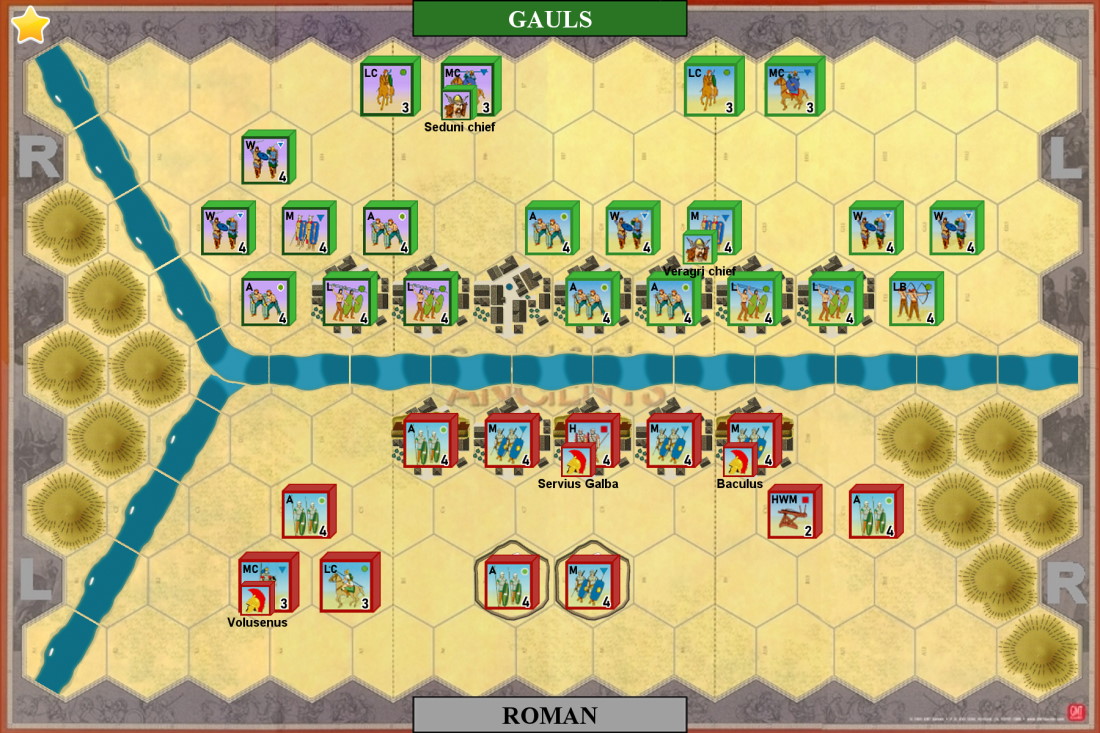 Gallic Tribal Leadership: The two Gallic tribes may NOT be ordered by same leadership card, otherwise no restrictions.

All hillsides are impassable, all river hexes fordable

Roman camp hexes each worth one banner if captured by Gauls (occupied at end of turn, banners cannot be lost/regained)