Historical Background
Scenario 6: The next day, Vercassivellaun (Gallic leader) leads 60,000 elite warriors in a night move on the Roman camp of Mount Rea (camp of Reginus and Rebinus : 2 legions). He launches the attack at noon and the Romans are about to break. Caesar is aware of this and brings many reinforcements to stabilize the situation. In addition, the Germanic horsemen are sent back to the Gallic army, which begins to flee. Vercingetorix, on the oppidum, decides to attack but is repelled by Brutus. Inexplicably, the remainder of the Gallic relief army does not move and then disappears (this army seems to be not so important and is probably overestimates).
The stage is set. The battle lines are drawn and you are in command. Can you change history? 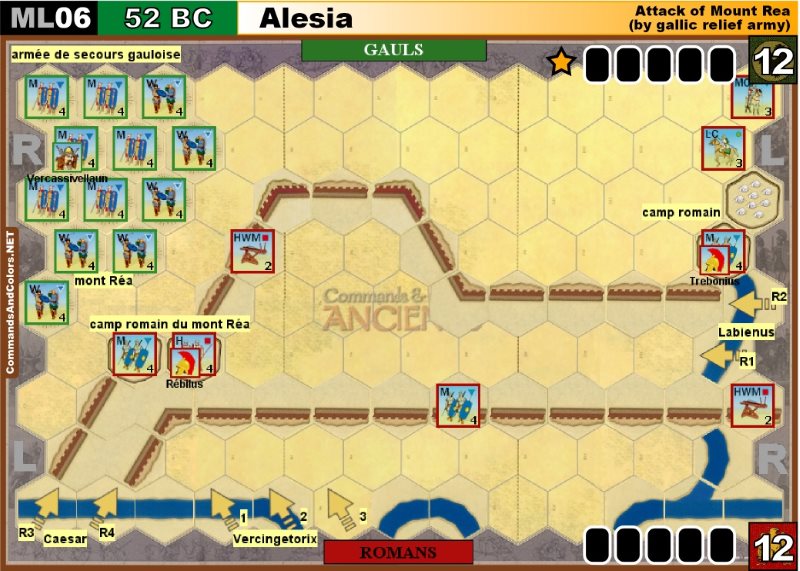 -Each player plays from his board edge (noted Roman edge or Gallic edge). The Gallic army is at the bottom of the board (oppidum of Alesia) and to the north of the plateau (Gallic relief army on Mount Rea). The Roman army defends the double wall (about 2 legions or 12 000 men in the camp of Mount Rea). Moreover, Caesar brings reinforcements from the south, and Labienus brings reinforcements at the right of the board.

-Entrance of reinforcements into play (Gallic and Roman): Play a card on one side (left, center, or right) permits at one (or more) units to come into play on this side (left, center, or right). We will enter as many units as the card game moves units ;
example: the card "2 units on the right" allows the Roman player to bring 2 units on the right, on the following hexes : "renfort R1", or “renfort R2". The unit that comes into play can move (according to its movement) or attack.

-Occupy the (Roman) Camp of Mount Rea (2 hexes) gives 2 victory banners at the beginning of his turn (majority temporary banner) for the side that occupies the majority of the camp. The camp is a strategic location : hold this strategic location allows to maintain or break the encirclement.

-“Campaign mod”: play the 6 scenarios in succession and note the banners to see who wins the "campaign" (of the battle of Alésia). Add up all the banners for all (6) scenarios for this.
- Replace the Carthaginians by a Gallic army (green blocks, barbarians).

-Game option (free positioning): The Roman player can either place his troops so defined by the script, either freely move his troops (obligation : within 2 lines of fortifications). Similarly, the Gallic player (relief army) can freely deploys his troops (obligation: but only on the hexes of Mount Rea he already occupies in the defined scenario). The Gallic army (Vercingetorix) can be freely reorganized (for his arrival order ; obligation: the Gallic army of Vercingetorix always starts off the board). The (2) Roman reinforcements can be reorganized freely (for his arrival order ; obligation: Roman reinforcements always start off the board, and you cannot take one reinforcements unit in the reinforcement package 1 and put it in the reinforcement package 2 - or the contrary).

The first time I as the Gauls attacked the camp, and due to the defensive benefits of the camps I took heavy losses. The Roman player got several victory banners. I did succeed at taking one camp hex but the unit was down to one block and a Roman attack eliminated it. I didn't bring any of Vercingetorix' army in quickly. The Romans got a line of infantry on the rampart and blocked Vercingetorix' army from crossing it. This battle was a decisive victory for the Romans.

The second time I played Gauls again. I opened with a double time, and sent my warriors across the rampart by the war machine and eliminated it. I also worked on bringing in Vercingetorix' army. I didn't attack the camp at all to begin with. This worked much better. I eventually ran out of cards to bring Vercingetorix' army in, but was able to do so again later. None of his mediums saw combat. It was a vary close (12 - 11) victory for the Gauls.

The game seems unbalanced if you look at the board. However, it seems nearly balanced if the Gauls don't attack the camp first and work to bring Vercingetorix' army in.
Read More...