ALESIA I - 52 BC
Initial cavalry battle (before Alésia)

Historical Background
Scenario 1: From 9 to 18 July: Initial Cavalry Combat. Approximately 15,000 Gallic horse that were hidden behind a hill attacked the column of Roman legionaries (70 000 men). Riders are divided into three main bodies: the first one on the head of the column, the 2 others on the flanks. 80,000 Gallic await behind a river, ready to complete the success of their cavalry. 3,000 are killed after the initial cavalry fighting (after rout of the cavalry). 10 000 Roman riders and Germanic mercenaries counter-attack and repel the Gallic cavalry.
The stage is set. The battle lines are drawn and you are in command. Can you change history? 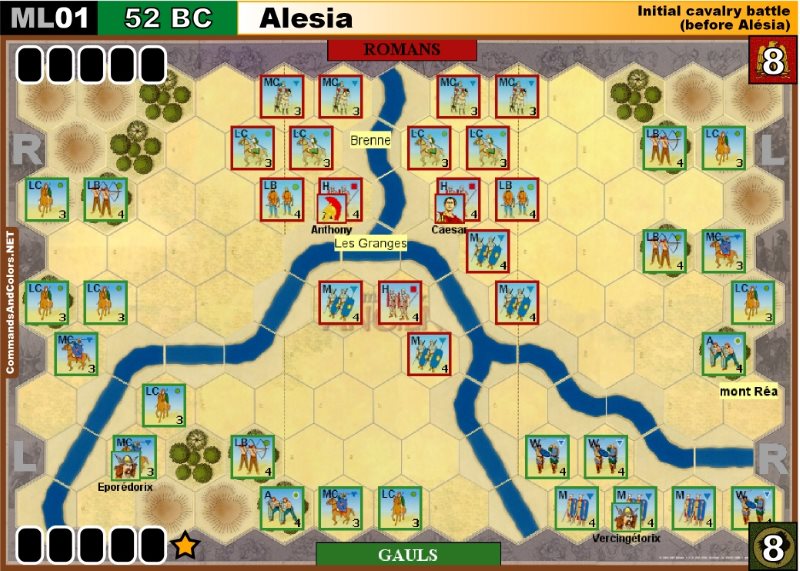 Gallic Army
• Commander: Vercingetorix Eporedorix (about 80,000 men behind a river, and about 15,000 riders attacking the Romans in a plain after hiding behind the hills - divided into three main bodies: the first on the head of the column, the 2 others on the sides).
• 5 Command Cards

Special Rules
-The Rivers (la Brenne) are fordable.
-Each player plays from his board edge (noted Roman or Gallic army). The Roman army is in center of the board, and the Gallic army is in front of it and on the 2 sides (flanks).
-Ability To play the 6 scenarios in succession and note the points to see who wins the "campaign" (of the battle of Alesia). Add all the banners for all (the 6) scenarios for this.
-replace the Carthaginians by a Gallic Army (barbarians, green blocks)

apergis1@verizon.net replied the topic: #3468 2 years 8 months ago
Rats. In the previous post I misspelled missile.
apergis1@verizon.net replied the topic: #3467 2 years 8 months ago
We have been playing it without the special Caesar and legion rules. We played it twice today. My wife won as the Romans and I won once as the Gauls.
We played several games where my wife kept slaughtering my as the Gaul. In those game I brought up the Gaul's medium infantry as soon as I could.
I have discovered that the best strategy for the Gauls is to wear down the Romans with missal fire from the light troop the bring up the medium infantry.

taliapharaoh replied the topic: #3462 2 years 8 months ago
Great scenario, seems like it could have numerous different endings each time it is played.

apergis1@verizon.net wrote: Hate to ask a stupid question but does one use the special Caesar rule and <a href="www.commandsandcolors.net/ancients/the-g...les-expansion-4.html">Julian Legions rule in effect?


My suspicion is that this scenario was designed a long time ago, before Expansion 2 was released. So Julian legions and Caesar were not rules at that time.

So I'd suggest you follow Steve's advice and play it without, but including them would likely tilt the balance towards the Romans, but give a more historical game.
apergis1@verizon.net replied the topic: #3460 2 years 8 months ago
My wife and I have played this game four times and she really likes. She has played the Romans and I played the Gauls. It is a real dog fight. She (Romans) have one twice and I have one twice as the Gauls. They were all close games that could have gone either way. We did not employ the special rules for legions or Caesar. It is very balanced as is.
apergis1@verizon.net replied the topic: #3455 2 years 8 months ago
Hate to ask a stupid question but does one use the special Caesar rule and Julian Legions rule in effect?
GF1954 replied the topic: #2624 4 years 6 months ago
Romans win round one 8 - 4. Nearly all the fighting occured on Roman's left flank. Vercingetorix and his army got across the river quickly, and was making good progress, and even had Caesar down to 2 blocks. But then Caesar had 2 rolls that completely destroyed 2 medium units for the win. It had looked that the Gauls were about to destroy Caesar and the Roman left flank until those 2 fateful rolls.
Read More...