Historical Background
Spartacus retreated through Lucania into Bruttium and toward the sea. He encamped at Rhegium where he attempted to gain passage to Sicily with the help of some Cilician pirate ships. Spartacus judged he could open a new front against Rome by starting another slave rebellion in Sicily. Unfortunately, the treacherous pirates deceived Spartacus. After coming to terms with him and receiving payment, they simply sailed away. When Crassus came upon Spartacus at Rhegium, he decided to exploit the engineering skills of his legions. The Roman army built a wall and ditch across the isthmus, some 30 kilometers in length. Spartacus was walled in, but he did not attempt to break out until his provisions began to fail. After two strenuous efforts to break free, his main force still remained trapped. Waiting and watching for a weak spot, the opportunity came one snowy night. The Slave army crossed the ditch and breached the wall to gain its freedom, but casualties were still very heavy, and only about a third of Spartacus’s men were able to escape. Crassus hurried after them in pursuit.
The stage is set. The battle lines are drawn and you are in command. The rest is history. 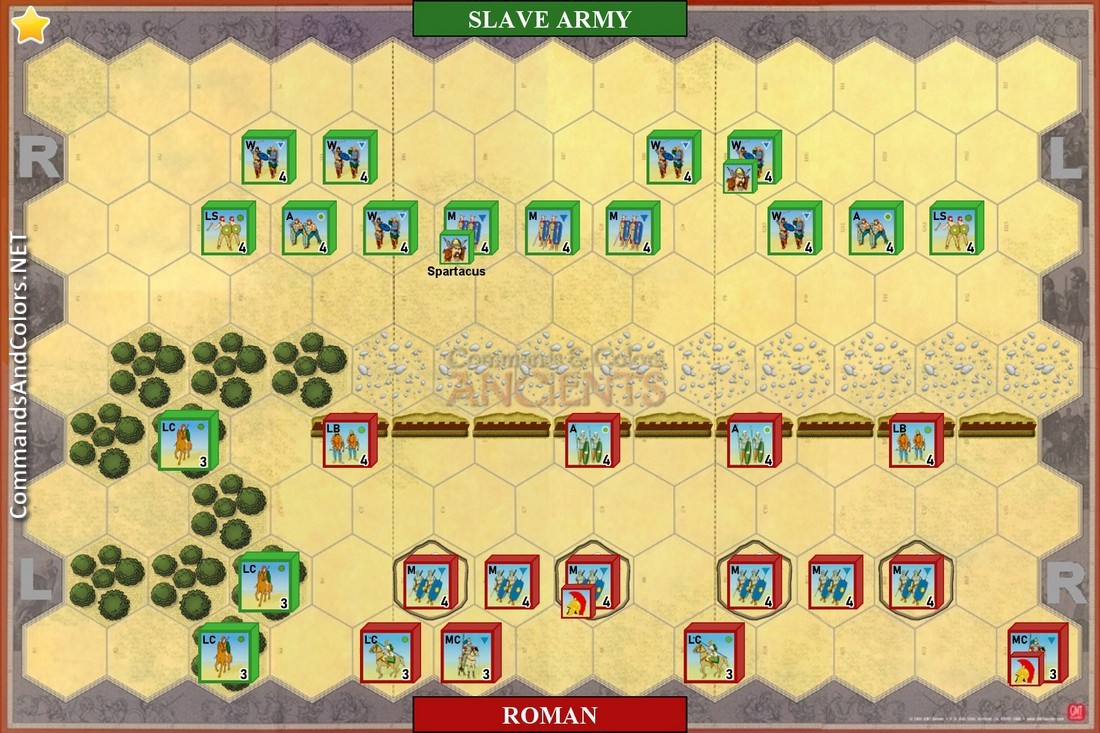 Special Rules
A Slave foot unit that exits off the Roman side of the battlefield immediately counts as one Victory Banner. The unit is removed from play.

• Ditch (use Broken Ground terrain tiles) - A unit must stop when it enters a ditch hex and may move no further on that turn. A ditch hex has no other battle restrictions or effects. Units battle normally into or out of a ditch hex. A ditch hex does not block line of sight.

howlingfang replied the topic: #4082 11 months 3 days ago
fmpape, the cavalry don't count for victory banners - only the foot units do. I know your game was a while ago but thought I would mention it for others that read this.

Just completed the game with a tight 6-5 victory for the Slaves. To be honest though, they had quite a few opportunities to collect that last banner where the Romans were looking at all full health units and there was an open path on the Roman left flank for a unit of slave slingers to escape. Romans made a final error by not retreating into a camp hex which would have prevented their elimination on what turned out to be the final turn, though it probably wouldn't have changecd the results.

fmpape replied the topic: #3999 1 year 4 months ago
Spartacus' light cavalry starts by making a dash through the forest and escaping while firing on the Romans to little effect.
The Romans push move across this flank to limit any further escapes from the Gladiator army.
The Gladiators then make a push towards the ramparts on the Romans right flanks with ranged fire while the Romans continue to close the gap on the last flank.
Spartacus then surged his troops forward in a line advance coming into contact with the Roman flank weakening them.
Spartacus and his subgeneral then advanced in support of their troops causing heavy causualties to the Roman Centre.
The Roman infrantry attempt to rally through the centre, supported by their General but ultimately were overwhelmed by the fighting prowess of their gladiators.

Strong fighting (good dice rolls) and effective support from the generals (Helmets causing casualties) led to a decisive victory.
The victory could have been greater if one of the slave light cavalry had made a dash past the Romans but instead let itself be pinned down by the Romans and destroyed.

der_mandarin replied the topic: #2846 3 years 9 months ago
Two line command cards for the Romans as well as one for the Slaves led to a fierce clash right at the ramparts with Rome gaining a quick 3-0 lead. Things started to turn a bit when Spartacus with a few choice units managed to break through the Roman line and scale the ramparts. Ultimately though, the Romans ended up being victorious when the mounted charge by Slaves on the left wing failed.

A few notes:
Getting onto the ramparts with the medium units ASAP seems to be necessary for the Romans. Being able to ignore flags and swords is huge.
On the flip side Romans don't necessarily want to descend the ramparts to go and chase weakened Slave units that retreated. Makes for a tough choice.
Another tough choice (at least for me) is, when to utilize the light cavalry units hidden in the woods. They seem to get routed easily after a mistimed play.

All in all a very interesting scenario with nice optics and gameplay!
Read More...