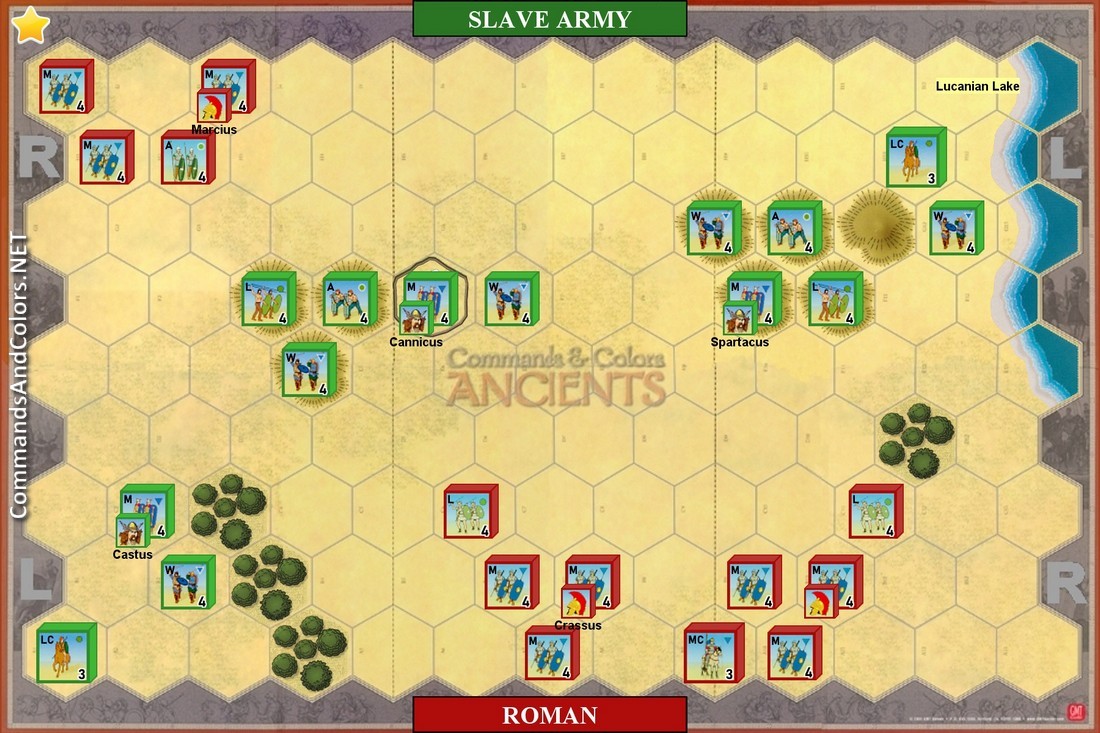 fmpape replied the topic: #4010 1 year 2 months ago
Battle Report:
The battle opened with Spartacus advancing his light troops on the left flank pulling the Romans forward in response. A number of light troops in the Slave army engaged both Roman armies with ranged fire to little effect.
The Roman army led by Crassus, advanced through the centre and right flanks maintaining their discipline with a strong line formation.
The Rebel army maintained steady ranged fire with their light troops causing some casualties to the legionaries on Rome’s right flank.
At this point, two of the rebel generals, Castus and Cannicus, decided to make a combined attack from Rome's left flank. Their gladiator training became clear as they destroyed the first legionary unit they attacked. The Roman's fought back, maintaining formation and causing heavy casualties in return but the gladiators maintained their assault on this flank destroying Crassus' unit and forcing him to evade and lose contact with his troops.
At this point, Marcius attempted to relieve the pressure on the main Roman army by attacking the now lightly defended slave camp.
The slaves defended their camp well while the main rebel army, now joined by Spartacus himself, continued to attack on the remainder of the Roman army under the command of Crassus.
Spartacus gambled that the slaves could defend their camp long enough for Spartacus to destroy the main Roman army.
The battle hung in the balance while Marcius tried to take the slave camp while the remainder of Crassus' army were forced to scatter and evade destruction.
It could have gone either way but a final unit of auxiliary slaves blocked the way into the camp allowing Spartacus to push his attack home causing a humiliating defeating on Crassus.
A victory to Spartacus 6-5 (or 8-5 when the Slaves had finished their attack).
Despite the score, this was a decisive victory for Spartacus with strong fighting (dice rolls) once again from the gladiators.
Crassus was humiliated while the slave army still had sufficient strength to regroup and push Marcius from the battlefield if necessary.
See attached file for end game.
Freeloading-Phill replied the topic: #1097 11 years 4 months ago
Played this against Badger.