Historical Background
Spartacus found his army trapped between the armies of Marcus Licinius Crassus to his front and Gnaeus Pompey, approaching from the rear. Crassus had started construction of his camp when a skirmish between the two armies escalated into a full battle. Crassus’s troops formed more quickly, and launched an effective attack before Spartacus could deploy all of his troops. Spartacus, seeing that his army was in jeopardy, killed his warhorse in front of the troops he had formed, a clear sign of defiance that could only mean one thing—he would fight to the death. As it became clear that his army was being defeated, Spartacus attempted to cut his way through the Roman troops to kill Crassus in one last desperate attempt to save the day. Spartacus was cut down by an arrow. In the end, thousands of men lay dead near the River Silarus, with Spartacus simply one body amongst many. Over 6,000 slave soldiers were captured, and Crassus had them all crucified along the Appian Way, from Capua to Rome. Crassus had defeated Spartacus, but Pompey managed to mop up a few thousand slave fugitives, and took credit for ending the rebellion.
The stage is set. The battle lines are drawn and you are in command. The rest is history. 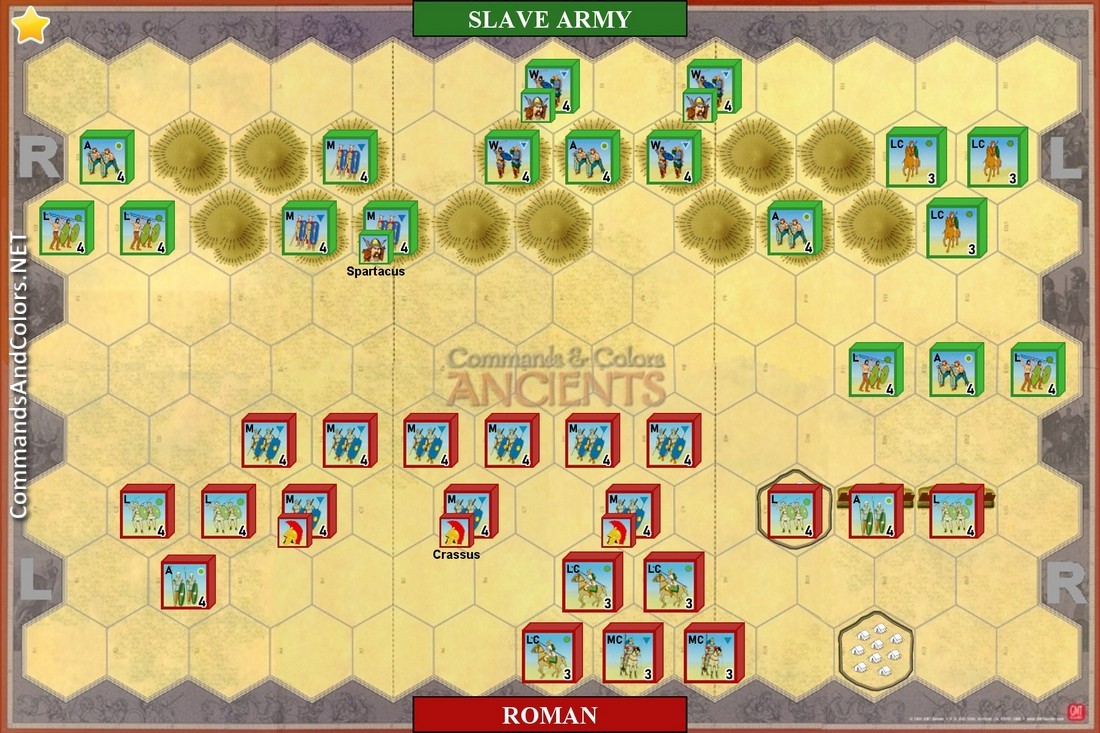 Special Rules
• A Slave unit that captures (occupies) the camp hex counts as a Victory Banner for the Slave player. As long as the Slave unit remains on the hex it counts toward the Slave victory. If it moves off or is eliminated, it no longer counts.

• Because Pompey’s army is advancing on the army of Spartacus from the rear, any Slave unit that is forced to retreat from the last row of the battlefield (where it would normally lose one block per retreat hex) will simply lose the entire unit, not just one block per each remaining retreat hex. This rule applies if the unit occupies a last row hex and is forced to retreat, or if it retreats into a last row hex with additional retreat hexes remaining. Eliminate the unit immediately and award the Roman player a Victory Banner.

der_mandarin replied the topic: #2974 3 years 3 months ago
I agree with others that it should be more than 6 banners. The low banner count makes the scenario probably more balanced but it feels weird ending the battle with plenty of units still on the board.

Line command cards are very fun to play on both sides in this one!
Tantalon replied the topic: #1609 6 years 4 months ago
Way too short. Should be at least 8 banners.

stnewhouse replied the topic: #1148 11 years 1 week ago
This one's a lot of fun. Almost an Epic-sized game. I wonder why it's only six banners? With the two huge armies, eight seems correct.

I've seen two Spartacus victories - one two-player and one solo. They seem to have all they need with plenty of troops and a great defensive position on the hills. It's literally an uphill battle for the Romans.
Freeloading-Phill replied the topic: #1103 11 years 1 month ago
Played a close one of this with Badger last night. His slaves won 6-5 leaving our play through of the Serville war at a narow Roman victory.

I underestimated the effect that attacking uphill would have on my Roman Legions since this is our first battle where it has been significant.

One more Serville battle to go.