Historical Background
Spartacus was an able strategist, and he knew that his rag-tag army could not expect to defy Rome indefinitely. Spartacus planned to escape from Roman territory over the Alps, and headed north through Apulia. He divided his ever-growing army and placed his lieutenant, Crixus, a Gaul, in charge of a force of 30,000 German and Gallic slaves, while he maintained personal command of the remaining 40,000 fighters. Crixus was over-confident after their many victories and allowed Spartacus to march far ahead while he allowed his men to continue their raiding and plundering. The consul Lucius Gellius Publicola came upon them suddenly and forced a battle. Crixus hastily formed his available men into a line of battle, but Publicola’s legionnaires cut them to pieces. Crixus was killed, along with two-thirds of his of his men. The survivors scattered and many probably re-joined Spartacus’s main column.
The stage is set. The battle lines are drawn and you are in command. The rest is history. 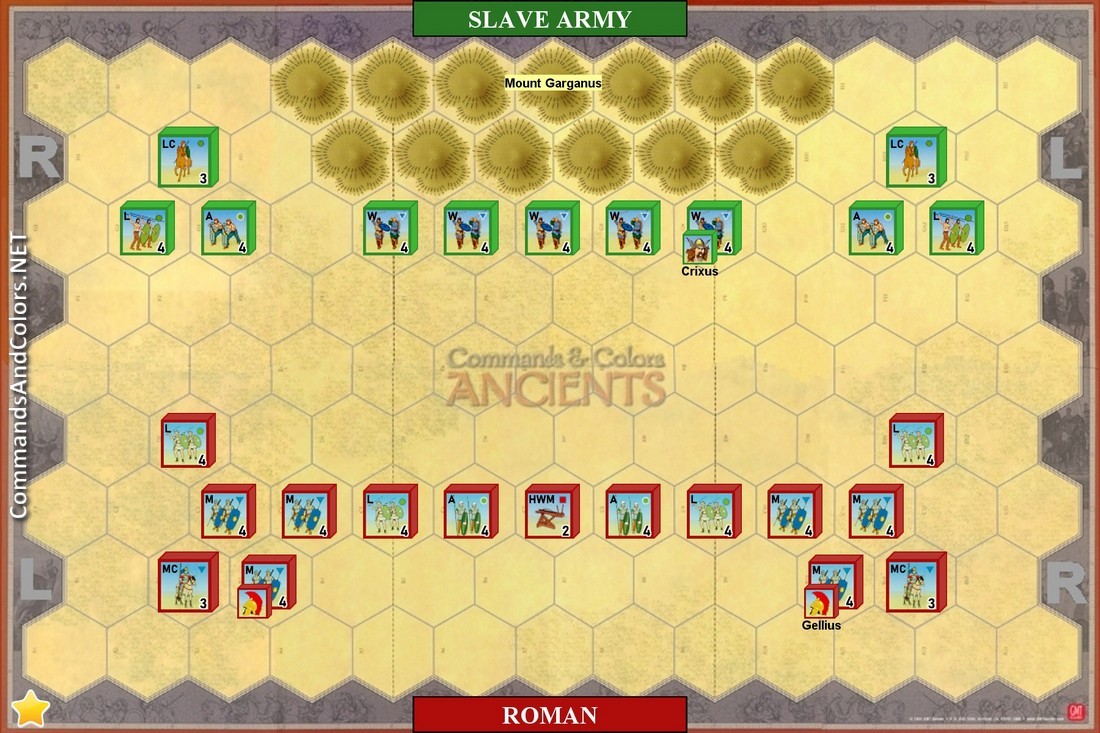 bigfriendben replied the topic: #4370 2 weeks 3 days ago
This was one of the most incredibly unlucky rounds I have ever played.

The Romans (me) opened up with some war machine fire that failed to score any hits, and before the Roman infantry on the wings could react, the slaves took advantage of the very weak middle. Crixus' warriors one-shotted at least four units and took no damage at all, despite having 16 dice rolled against his unit in ranged and close combat over the course of the game. The Romans are massacred in a 6-0 Slave Victory.

All my opponent and I could do was laugh as Crixus avoided his historical death and slaughtered his way to the very steps of Rome itself.
clavain replied the topic: #4224 4 months 2 weeks ago
6-5 Romans - warriors tried to take out the centre but were intercepted by the Roman left, Crixus bravely carried on into the main Roman line, doing some serious damage and almost winning the game, but failing to kill a 1 point auxilia to do so. Romans counterattacked with the medium foot again, and got the units they needed.

taliapharaoh replied the topic: #3754 1 year 6 months ago
A 6-3 Slave Army victory, but it took solid cards and multiple bad rolls by my Roman opponent.  Warriors stormed the Roman right, then were able to secure the victory by rolling up exposed units on the Roman left while taking very few hits on battle-back.  A very unlikely victory indeed, as it seems pretty imbalanced.  This would be a good scenario to use to teach the basics of the game though, in my opinion.
GF1954 replied the topic: #3747 1 year 6 months ago
2 Solitaire games with the Romans winning twice, 6 - 4, and 6 - 3. I really don't think that the slaves have a chance in this one.

der_mandarin replied the topic: #2863 3 years 5 months ago
Two close games where the slave warriors rushed head first into the Roman center. One game saw the slaves prevailing 6-4 whereas in the second game the Romans managed to bring over their medium units from the flanks to defeat the injured warrior units. The second battle also saw the Roman player start out with rolling two flags with the heavy war machine against the unsupported warrior unit!

Not sure how to effectively use the light units on the flanks as slave player. Any ideas?
ner.gif" width="120" height="90" alt="driddle01's Avatar" />
driddle01 replied the topic: #2116 5 years 2 weeks ago
Romans won 6-3. Played out as it looked. Curious took out Roman center, but Romans destroyed Slave right flank, and turned on slave warriors in center. 2 Roman leaders made the difference.
Read More...