Historical Background
The greatest slave revolt against Rome was led by a gladiator named Spartacus. He was a Thracian slave, trained as a gladiator by his owner, Lentulus Batiatus, at a gladiatorial school near Capua. Spartacus escaped from the school with 78 fellow gladiators. After some successful skirmishes with local guards, his force set about raiding the countryside, freeing more slaves to join their ranks. Spartacus set up a base on the defensible slopes of Mount Vesuvius. Remembering the earlier Slave Wars in Sicily, the Senate in Rome took this outbreak seriously. They dispatched Praetors Claudius Glaber and Publius Varinius with 3,000 men to suppress the uprising. Glaber and Varinius blockaded Spartacus at his base on Mount Vesuvius, intending to starve out the slaves since their camp was only accessible by a narrow and difficult passage. The wily Spartacus did not intend to be starved into submission, so he devised a daring plan. He ordered ladders to be made from the vines that grew on Vesuvius. Spartacus and most of his followers quietly descended the vine ladders, undetected by the Romans. Soon, a picked force of the slaves rushed the Roman camp from the mountain. Once the Romans were fully occupied by this attack, Spartacus and his force struck unexpectedly. Attacked from both sides, the Roman camp fell in short order. This victory over regular Roman forces allowed Spartacus to expand his operations and recruit a massive slave army.
The stage is set. The battle lines are drawn and you are in command. The rest is history. 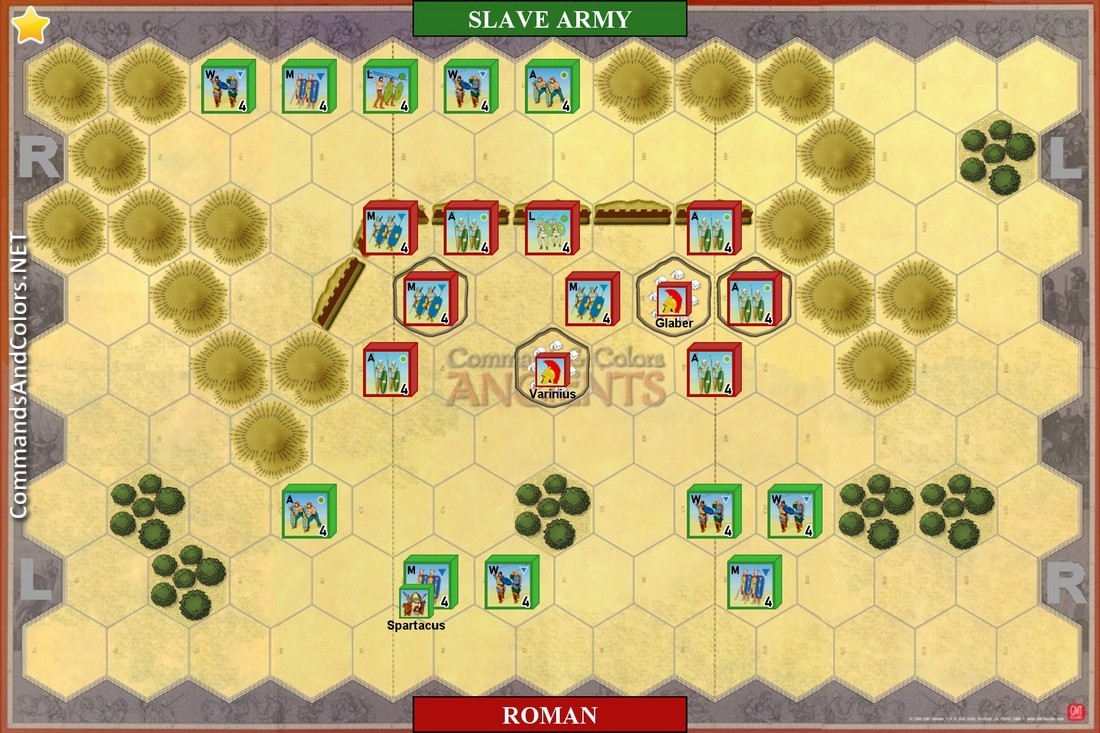 Special Rules
• All the hills are considered impassable terrain.

der_mandarin replied the topic: #2862 3 years 7 months ago
Played two matches yesterday where both sides won once. First game saw the slave warriors charge forward and eliminating one leader as well as occupying one of the camp hexes for two quick banners. The Romans were unable to dislodge the full strength unit from the camp in time. The battle was a bit more even from this point on but the slave army kept its banner lead until the very end.

In the second game the slave warriors made the same charging move to start out the battle but completely missed two dice rolls against single leader units. The Romands where then able to reunite their leaders with their units and mop up the unsupported warrior units.

Sounds interesting. How does your "robot" player work?

Well, it's not entirely automatic but this is what I have now to enable me to play one side when I play solitaire.

On the Robot's turn.
First Strike
While the Robot has a First Strike card set aside you must check to see if it will use it whenever you make a close combat attack. Victory
[Optional] If there are any objectives for your side then you must claim at least one for victory. The Robot does not have to do the same.

I was lucky enough to get a Leader kill in each battle but the lop-sided mix of unit types hinders the Robot player a bit in this scenario.