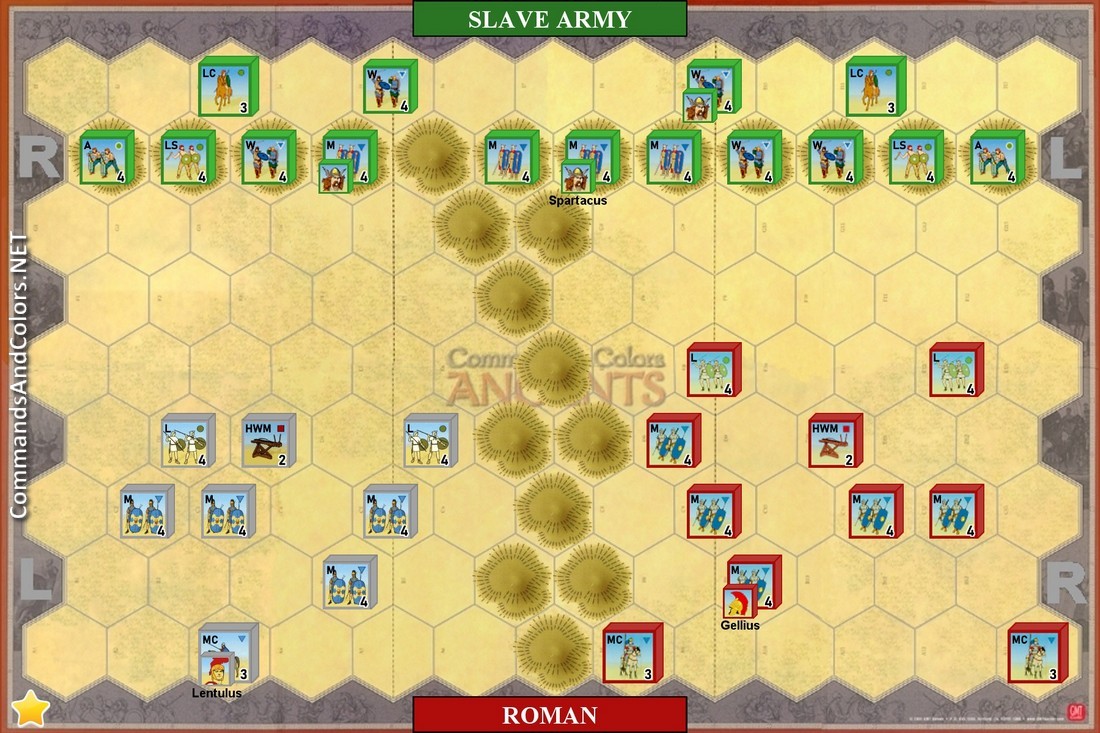 clavain replied the topic: #4235 9 months 4 weeks ago
8-3 Slaves. Slave right skirmished and then committed with slowly advancing Romans, and both Slave right and Roman left more or less knocked each other out. Spartacus then had two line commands followed by an I am Spartacus to come crashing down on the Roman right/center. Didn't help that the Romans rolled poorly but the wing coordination really hurt them also. Didn't help that two Roman leaders also died to one slave leader.

fmpape replied the topic: #3982 1 year 6 months ago
Slaves won 8:2.
The Romans suffered badly from an inability coordinate their forces.
Much of the battle took place down the central hills.
Spartacus' army fought like true gladiators pretty much coming out on top in every close combat with the Romans.
Most Roman units were lost within 1 or 2 close combats.
ner.gif" width="120" height="90" alt="driddle01's Avatar" />
driddle01 replied the topic: #2565 4 years 8 months ago
Slaves won 8:5. Romans did okay on right, but slaves rolled Roman right, and Spartacus started to roll the right side of Roman left army.
Valvorik replied the topic: #2105 5 years 6 months ago
Played again, 14 turns, Slaves 8:3. The Romans were really hindered by their divided command more than anything else, weakening their hand's effectiveness.
Valvorik replied the topic: #2104 5 years 6 months ago
10 turn solo game, Romans 8:4. No shattering moves, just steady work, Marian unit fire, heavy fire couple of times to take a block out of warrior unit early etc.
Read More...