Written by Joe Bisio. Posted in Third Servile War (73-71 BC)

The Last Battle 71 BC

Historical Background
“On account of this vote Crassus tried in every way to come to an engagement with Spartacus so that Pompey might not reap the glory of the war. Spartacus himself, thinking to anticipate Pompey, invited Crassus to come to terms with him. When his proposals were rejected with scorn he resolved to risk a battle, and as his cavalry had arrived he made a dash with his whole army through the lines of the besieging force and pushed on to Brundusium with Crassus in pursuit. When Spartacus learned that Lucullus had just arrived in Brundusium from his victory over Mithridates he despaired of everything and brought his forces, which were even then very numerous, to close quarters with Crassus. The battle was long and bloody, as might have been expected with so many thousands of desperate men. Spartacus was wounded in the thigh with a spear and sank upon his knee, holding his shield in front of him and contending in this way against his assailants until he and the great mass of those with him were surrounded and slain. The Roman loss was about 1000. The body of Spartacus was not found. A large number of his men fled from the battle-field to the mountains and Crassus followed them thither. They divided themselves in four parts, and continued to fight until they all perished except 6000, who were captured and crucified along the whole road from Capua to Rome. “ (from Arrian’s Histories) 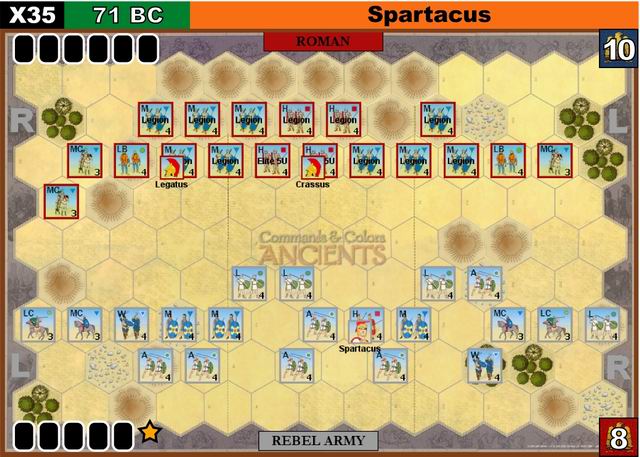 Victory Conditions:
Romans must score 10 Banners, but receive 2 Banners for eliminating Spartacus and 1 Banner if they force him from the map.
The Rebel Slave army must score 8 Banners to win using normal scoring.

Special Rules:
Command Rules:
Spartacus can cancel a Retreat and a Swords result inflicted on the unit he is stacked with. Other Leaders can cancel a Retreat or a Swords result inflicted on the unit they are stacked with. Only the first helmet hit inflicted by a unit supported by a Leader in close-combat or battle-back is counted unless the Leader is Spartacus in which case up to two helmet hits are counted. Units and the Rally Card:. No unit can be rallied to beyond five blocks or its strength at the start of the game whichever is less. If a Player rolls “swords” when attempting to rally he may freely chose which unit gets a block back.

I Am Spartacus Card:
The Roman Player may never play the “I am Spartacus” Card save to pass (no orders) and completely reshuffle the deck. The Rebel Player may roll all 7 dice if he plays the card.

Outflanking
This is an easy way of introducing facing and flanks to the game with little fuss—it can be retrofitted to other scenarios where appropriate: A unit is said to be “Outflanked” if it is surrounded in all six adjacent hexes by either enemy units, or hexes adjacent to an enemy unit. The presence of friendly units or impassable terrain does not negate an “Outflanked” situation in any way. Units on the board edges (and not surrounded by six adjacent hexes) cannot be “Outflanked”. Effects of being Outflanked: “Outflanked” units when battling back roll only half the normal number of dice they would be normally entitled to rounded up—to a maximum of only two dice—“Outflanked” units when battling back never hit on helmet rolls even if supported by a leader. A unit’s “Outflanked” situation is judged at the instant it battles back.

Retreat Special Rule:
Cavalry Retreat: ALL Cavalry in the game need only retreat, and are allowed to retreat only two hexes per uncanceled Flag—not the normal distances listed in the rules.

Roman Army Special Rules The following types of infantry units in the game the Roman side are assumed to be Roman Legionary units: ALL Roman Heavy & Medium Infantry.

Roman Pilum: Each Roman Legionary Infantry unit starts with a Pilum Marker. The Pilum is a one-time use weapon that is generally fired right before a Roman Legionary unit attacks in close-combat or is itself attacked by the enemy in close-combat. Once the Pilum is fired the Pilum marker is removed from the Roman unit to indicate that the Pilum has been expended and the unit may not throw Pilum for the rest of the battle. Just before a Roman unit with Pilum is attacked or is itself attacked by the enemy for the very first time in the battle in close-combat it throws its Pilum—roll one die and apply normal hits for swords, color, or a Flag/retreat hit Afterwards remove the Pilum marker. The act of throwing the Pilum is not considered to be part of the Close-Combat—so any result of the Pilum throw is resolved before the Close-combat. An attached Leader may use his special ability to cancel a “swords” hit that was inflicted via a Pilum hit (see special Command rules) on the unit he is stacked with. Roman units, adjacent to the enemy, that have not expended their Pilum may also be ordered to throw Pilum if the card “Darken the Sky” is played by their commanding player. The Player picks one adjacent enemy unit and throws two dice –apply the results just as one would before close combat—and remove the Pilum Marker.

Roman Relief Moves & Cohort Maneuvers: Adjacent and on the same side Roman Legionary Infantry, instead of moving, may switch places in a “Relief/Cohort Maneuver”. Relief/Cohort Maneuvers may only be conducted through the play of Section cards ONLY. Instead of ordering one unit via a section card, the controlling Player may order a pair of adjacent Legionary Infantry units to switch hexes—at least one of the units switching places must not be adjacent to an enemy unit. A unit that switched places via the Relief/Cohort Maneuver into a hex adjacent to the enemy may close combat in the same player-turn. Rebel Slave Army Special Rules: Rebel Heavy Infantry Unit: The Rebel Heavy Infantry unit represents the remaining Gladiator and Gladiator trained troops around Spartacus. This unit throws one extra dice the very first time it engages in close-combat or battle-back in the game. Rebel Auxillia Units: The Rebel Auxillia units represent the ruck of the poorly armed rebelling slaves—treat as Auxillia, however, these units have NO missile capability, battle-back with only two dice, and retreat two hexes per Flag result inflicted on them. Rebel Light Infantry: Rebel Light Infantry may only evade Roman Legionary units. Spartacus: Rebel units located adjacent to Spartacus may ignore one of the Flag hits inflicted upon them. If Spartacus is eliminated or evades off-map the Rebel Player immediately discards one card permanently, having his hand reduced to four cards.

fmpape replied the topic: #4033 10 months 2 weeks ago
The Vassal Module created by Joe Bisio is in an older .sav format and have been unable to load.
I have recreated the setup using the Vassal Standard Setup map board and adding the Scenery and Troop layouts as above.
The .vsav file is attached below (click on 'read more...' if you can't see it).
Read More...