Historical Background
In the autumn of 72 BC, Marcus Licinius Crassus was chosen by the Senate to lead the war against Spartacus’ slave army. Crassus, a leading politician, was also rumored to be the richest man in Rome. How all this would translate into military success was anybody’s guess, but many noble volunteers flocked to join his army of six legions. Meanwhile, the victorious slave army was marching southward again. Spartacus proposed a negotiated settlement, but Crassus refused to consider it. Next, Crassus assigned two of the legions to his deputy, Mummius, and gave him the task of harassing the flank of the slave army. Mummius was to slow down the slave army while the main force under Crassus waited on the border of Picenum, expecting Spartacus would come back that way. Unfortunately, Mummius wanted to maximize his own glory and foolishly attacked, even though outnumbered. His detachment was routed, and many of his legionnaires survived only by abandoning their arms and fleeing. Crassus subjected the remnants of Mummius’ legions to decimation, a harsh punishment not used in many years. One man in each squad of ten was chosen by lot and executed before the whole army. The legionnaires learned to fear Crassus more than they feared Spartacus.
The stage is set. The battle lines are drawn and you are in command. The rest is history. 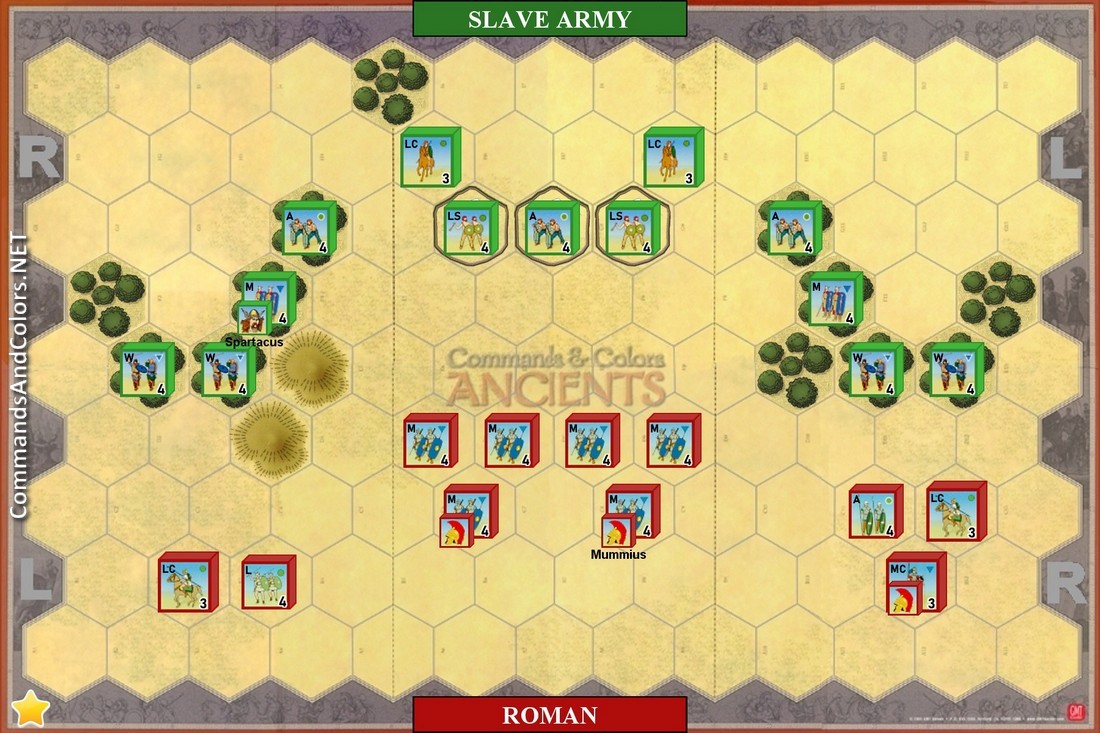 fmpape replied the topic: #3991 1 year 1 month ago
Romans retained a tight formation centre and right until late in the battle taking down three warrior units for loss of one auxiliary.
Spartacus made a charge from the hills on their right flank with support from his light infantry causing heavy casualties to Rome's medium infantry.
After a final fight back from the Roman medium cavalry into Spartacus's lighter troops in the rear. These units held their ground allowing Spartacus to surround and destroy the Roman Cavalry for a final victory.

Stanislav27 replied the topic: #3049 3 years 1 month ago
Results from our group's 10 tournament matches:

MasterChief replied the topic: #1003 11 years 8 months ago
Yeah - this was a fun game. My initial cards (which I cannot remember now) suggested trying to attack into the right forest. And then when the correct card (ie, Line Command) eventually popped up - I'd try and advance around the right flank of the towns. I remember it got close, and I think I just couldn't get that second unit onto one of those dang town hexes!

Tuscan-Centurion replied the topic: #991 11 years 8 months ago
Played this twice on the weekend against Masterchief and King Billy, once as each side. Won a close one as Spartacus (5-4) taking 2 banners on my last move against Mummius's cohort in the centre to snatch the win off Masterchief. Swapped sides and had an easier time. Romans marched up the centre and fended off slave charges as Spartacus tried to stop the march of the legion towards their camp.Spartacus survived but his army didn't - Romans won (5-3)

Freeloading-Phill replied the topic: #984 11 years 8 months ago
I played this one as the Romans against Badger and it came down to the wire.

We were both at 4 banners when my centre finally collapsed and the slaves struck for the final banner.

Our play through of the revolt now stands at 2 wins each.