Written by GMT Games. Posted in Third Mithridatic War (75-65 BC)

Historical Background
Mithridates VI of Pontus challenged Rome for control of Asia Minor and Greece while the Romans were distracted in the Italian War. Although Rome defeated Mithridates in the First and Second Mithridatic Wars, he was allowed to maintain his kingdom in Pontus. A Third Mithridatic War began in 73 BC, and Mithridates suffered a major defeat at Cabira the following year. Mithridates fled to the court of his son-in-law, King Tigranes the Great of Armenia, who refused a Roman demand to surrender him. The Roman Proconsul, Lucius Licinius Lucullus, invaded Armenia with two Roman legions, defeating a small cavalry force and investing the capital city of Tigranocerta. Meanwhile, Tigranes raised a large force of Armenians and allies in Taurus.
As Tigranes’ army approached to lift the siege, Lucullus split his force, leaving enough strength to maintain the siege and deploying the rest of his army along a deep river to block the advancing Armenians. Tigranes deployed opposite the Romans, confident of an easy victory, but argued with Mithridates about the plan of action. Lucullus led a column out of sight of the Armenian army, crossed at a bend in the river, and gained Tigranes’ right flank. Seeing the opportunity, Lucullus personally led the Roman charge down the hill against a force composed of both light horse and cataphracts. Tigranes tried to adjust his battle line but it was too late. The cavalry was either destroyed or driven off and the Armenian baggage train captured. The city of Tigranocerta fell to the Romans, but Tigranes and Mithridates fled with the rest of the army and continued to resist.
The stage is set. The battle lines are drawn and you are in command. Can you change history? 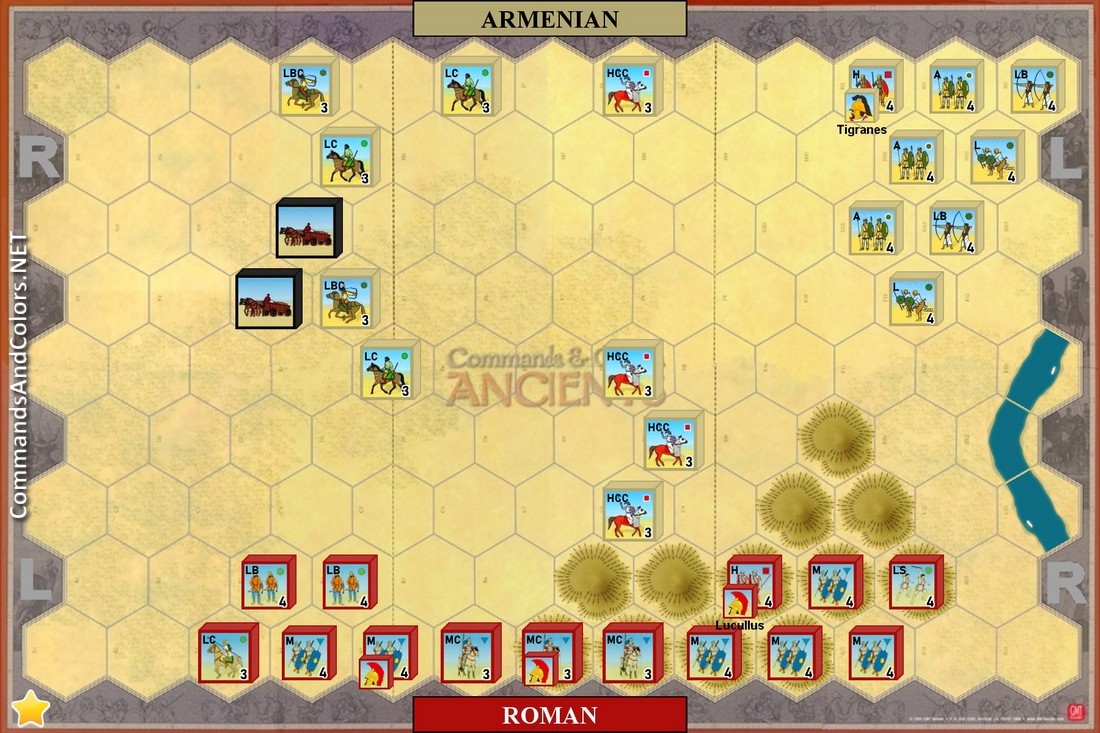 Marian Legions rule is in effect.

The river is impassable.

TomKnight3 replied the topic: #3490 11 months 3 weeks ago
Rome won the game 6-2. Baggage wagons never moved and were not destroyed. Armenians lost all their HC and several LB Cavalry. It was close for Rome at one point, and the the Armenians just fell apart.

taliapharaoh replied the topic: #2829 2 years 4 months ago
My Roman cavalry got destroyed by no hits and fierce BBs by the HCC...lost 6-4 despite a nearly epic comeback.
GF1954 replied the topic: #2754 2 years 6 months ago
2x solitaire with the Romans winnng rather easily by the score of 6 - 0, and 6 - 2. I don't think the Armenians have a chance in this one. In both games, a early Roman calvary charge in the middle was a huge factor.
Read More...