3rd Mithridatic War
The Battle of Zela 67 BC

Historical Background
The Selection below is from Appian’s History of Rome: “Triarius, the other general of Lucullus, now came with his own army to the assistance of Fabius and received from the latter his forces and authority. He and Mithridates not long afterward joined battle, during which a tempest of wind, the like of which had not been known in the memory of man, tore down the tents of both, swept away their beasts of burden, and even dashed some of their men over precipices. Both sides then retreated.” “News having been received that Lucullus was coming, Triarius hastened to anticipate his action and made a night attack upon the outposts of Mithridates. The fight [near Zela] continued for a long time doubtful, until the king made a powerful charge on that division of the enemy that was opposed to him and decided the battle. He broke through their ranks and drove their infantry into a muddy trench, where they were unable to stand and were slaughtered. He pursued their horse over the plain and made the most spirited use of the stroke of good luck until a certain Roman centurion, who was riding with him in the guise of an attendant, gave him a severe wound with a sword in the thigh, as he could not expect to pierce his back through his corselet. Those who were near immediately cut the centurion in pieces. “ “Mithridates was carried to the rear and his friends recalled the army, by a hasty signal, from their splendid victory. Confusion befell them by reason of the unexpectedness of the signal, and fear lest some disaster had happened elsewhere. When they learned what it was they gathered around the person of the king on the plain in consternation, until Timotheus, his physician had stanched the blood and lifted the king up so that he could be seen. (In like manner in India, when Alexander [the Great] was cured, he showed himself on a ship to the Macedonians, who were alarmed about him.) “ “As soon as Mithridates came to himself he reproved those who had recalled the army from the fight, and led his men again the same day against the camp of the Romans. But they had already fled from it in terror. In stripping the dead there were found 24 tribunes and 150 centurions. So great a number of officers had seldom fallen in any single Roman defeat. “ 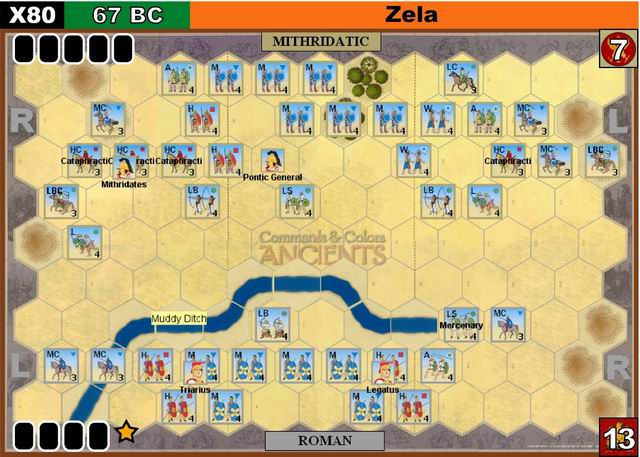 Roman Army:
(the Roman Player may not start with the “I am Spartacus”Card or “First Strike” Card in his initial hand)
Army Leader: Triarius
Command: 4 Cards
Move First

Victory Conditions:
Roman Victory: 13 Banners—Romans score 2 Banners if they manage to eliminate Mithridates. They also can receive 1 Banner if Mithridates is forced to evade off the map.
Mithridatic Victory: 7 Banners

Special Scenario Rules:
Command Rules:
All Mithridatic & Roman Leaders may cancel a retreat or a sword hit if present with the unit. Units on both sides involved in close combat with the support of a Leader may only count one helmet hit amongst those rolled to inflict a hit on an opposing unit, unless Mithridates is the supporting leader---then up to two helmet hits may be counted.
Units and the Rally Card:. No unit can be rallied to beyond four blocks or its strength at the start of the game whichever is less. If a Player rolls “swords” when attempting to rally he may freely chose which unit gets a block back.

Roman Legionary Infantry & other Special Roman Army Rules:
The following types of infantry units in the game on the Roman side are assumed to be Roman Legionaries: ALL Roman Heavy & Medium Infantry.
Roman Pilum:
Each Roman Legionary Infantry unit starts with a Pilum Marker. The Pilum is a one-time use weapon that is generally fired right before a Roman Legionary unit attacks in close-combat or is itself attacked by the enemy in close-combat. Once the Pilum is fired the Pilum marker is removed from the Roman unit to indicate that the Pilum has been expended and the unit may not throw Pilum for the rest of the battle.
Just before a Roman unit with Pilum is attacked or is itself attacked by the enemy for the very first time in the battle in close-combat it throws its Pilum—roll one die and apply normal hits for swords, color, or a Flag/retreat hit Afterwards remove the Pilum marker. The act of throwing the Pilum is not considered to be part of the Close-Combat—so any result of the Pilum throw is resolved before the Close-combat. An attached Leader may use his special ability to cancel a “swords” hit that was inflicted via a Pilum hit (see special Command rules) on the unit he is stacked with.
Roman units, adjacent to the enemy, that have not expended their Pilum may also be ordered to throw Pilum if the card “Darken the Sky” is played by their commanding player. The Player picks one adjacent enemy unit and throws two dice –apply the results just as one would before close combat—and remove the Pilum Marker.
Roman Relief Moves & Cohort Maneuvers:
Adjacent and on the same side Roman Legionary Infantry, instead of moving, may switch places in a “Relief/Cohort Maneuver”. Relief/Cohort Maneuvers may only be conducted through the play of Section cards ONLY. Instead of ordering one unit via a section card, the controlling Player may order a pair of adjacent Legionary Infantry units to switch hexes—at least one of the units switching places must not be adjacent to an enemy unit. A unit that switched places via the Relief/Cohort Maneuver into a hex adjacent to the enemy may close combat in the same player-turn.
Roman Elite Mercenary Slingers
The Roman Slinger units hit on swords when executing missile fire & battle-back.
Roman Cavalry Discipline: Roman Medium Cavalry only retreat 2 hexes per Flag result taken.

The Mithridatic Asiatic Army Special Rules
Asiatic Army: The Mithridatic Army is assumed to be a typical, but somewhat well trained Asiatic ‘horde’, greatly outnumbering, but inferior in equipment, discipline, and fighting spirit to the forces of the Roman Republic’s Legions---In Close Combat and Battle Back ALL Mithridatic units, save their Heavy Cavalry make no hits on their enemies if Swords are rolled—always consider Swords to be a ‘miss’ when rolled by the Mithridatic Player unless the unit is a Cataphracti Heavy Cavalry unit involved in the close-combat or battle-back.
Mithridatic Cataphracti: ALL Mithridatic Heavy Cavalry is heavily armored—therefore they always ignore the first sword hit inflicted upon them in close-combat or battle-back, or hits from missile or pilum fire. Mithridatic Heavy Cavalry may never evade battle, and unlike most other Mithridatic units hit on sword rolls as noted above.
Mithridatic Horse Archers: When missile firing at a three hex range Mithridatic Light Mounted Archers do so with only 1 dice regardless of whether or not they have moved.
Special Rule: The Attempt to Assassinate Mithridates by the Roman Centurion:
The Roman Player may roll one die normal six sided die (D6) to attempt to assassinate King Mithridates if the “First Strike” or the “I Am Spartacus” card is played from his hand. An attempt to assassinate the King may only be done once per game.
First conduct the activity on the card normally, then roll one dice: on a “6” Mithridates is killed—remove his Leader block from play and the Roman Player scores 2 Banners. On a “4-5” Mithridates is badly wounded –his block is removed from play—no banners are scored and all Mithridatic units must retreat one hex immediately in any order as nominated by the Mithridatic Player. Units unable to complete the retreat in this manner lose 1 block. On a “3” Mithridates is lightly wounded—he evades one hex towards his board edge if possible (or evades off the board if in the last “I” row)—On a “1-2” the assassination attempt fails—the Roman centurion has been detected before he could harm the king.

Discard Option—
If a player’s Army Leader is still on the map he may, at the start of his own player-turn, choose to discard three cards from his hand and redraw three more cards in lieu of executing a regular player-turn ---this may only be done in place of taking a normal player-turn (the normal player-turn is skipped over and the enemy player now has the option to conduct a normal player-turn or do a discard for his hand).
Special Terrain Rules:
Use all normal terrain rules save for the ‘muddy ditch’ feature the effects of which are outlined below:
Units on a muddy ditch hextile may not give support to adjacent units or receive support from adjacent units. Units located in a muddy ditch hextile are always -1 ‘normal’ dice in battle-back or close-combat. Muddy ditches have no other effects and do not stop or influence movement or any other game function in any way