3rd Mithridatic War
The Battle of Tigranocerta 69 BC

Historical Background:
The Battle of Tigranocerta was fought in 69 BC between Roman Republic forces and the army of King Tigranes the Great. The Roman force was led by Consul Lucius Licinius Lucullus, and Tigranes was defeated. His capital city of Tigranocerta was lost to Rome as a result.” “The battle arose from the Third Mithridatic War being fought between Roman Republic and Mithridates VI of Pontus, whose daughter was married to Tigranes. Mithridates fled to seek shelter with his son-in-law, and Rome invaded Armenia. Having laid siege to Tigranocerta, the Roman forces fell back behind a nearby river when the large Armenian army approached. Feigning retreat, the Romans crossed at a ford and fell on the right flank of the Armenian army. After the Romans defeated the Armenian cataphracts, the balance of the Armenian army, which was mostly made up of raw levies and peasant troops from Tigranes' extensive empire, panicked and fled, and the Romans won the battle comprehensively.” (From a online internet historical reference) 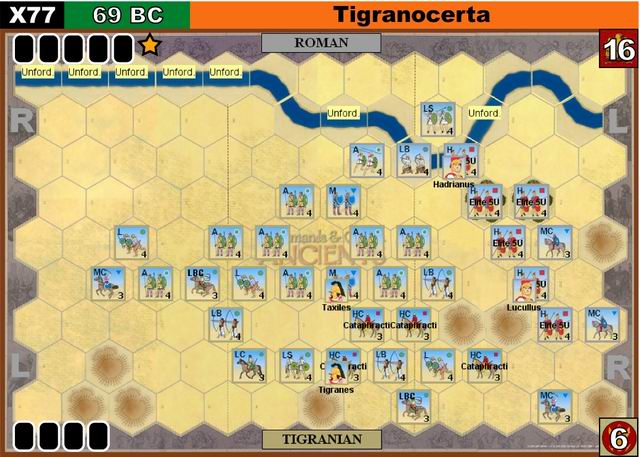 Victory Conditions:
Roman Victory: 16 Banners—Romans score 2 Banners if they manage to eliminate Tigranes, and 2 Banners per enemy Heavy Cavalry unit they eliminate, both in place of the usual one banner per.
Tigranian Victory: 6 Banners

Special Rules:
Command Rules:
Units on both sides involved in close combat with the support of a Leader may only count one helmet hit amongst those rolled to inflict a hit on an opposing unit, unless Lucullus is the supporting leader---then up to two helmet hits may be counted.
Units and the Rally Card:. No unit can be rallied to beyond five blocks or its strength at the start of the game whichever is less. If a Player rolls “swords” when attempting to rally he may freely chose which unit gets a block back.

Roman Legionary Infantry & other Special Roman Army Rules:
The following types of infantry units in the game on the Roman side are assumed to be Roman Legionaries: ALL Roman Heavy Infantry.
Roman Pilum:
Each Roman Legionary Infantry unit starts with a Pilum Marker. The Pilum is a one-time use weapon that is generally fired right before a Roman Legionary unit attacks in close-combat or is itself attacked by the enemy in close-combat. Once the Pilum is fired the Pilum marker is removed from the Roman unit to indicate that the Pilum has been expended and the unit may not throw Pilum for the rest of the battle.
Just before a Roman unit with Pilum is attacked or is itself attacked by the enemy for the very first time in the battle in close-combat it throws its Pilum—roll one die and apply normal hits for swords, color, or a Flag/retreat hit Afterwards remove the Pilum marker. The act of throwing the Pilum is not considered to be part of the Close-Combat—so any result of the Pilum throw is resolved before the Close-combat. An attached Leader may use his special ability to cancel a “swords” hit that was inflicted via a Pilum hit (see special Command rules) on the unit he is stacked with.
Roman units, adjacent to the enemy, that have not expended their Pilum may also be ordered to throw Pilum if the card “Darken the Sky” is played by their commanding player. The Player picks one adjacent enemy unit and throws two dice –apply the results just as one would before close combat—and remove the Pilum Marker.
Roman Relief Moves & Cohort Maneuvers:
Adjacent and on the same side Roman Legionary Infantry, instead of moving, may switch places in a “Relief/Cohort Maneuver”. Relief/Cohort Maneuvers may only be conducted through the play of Section cards ONLY. Instead of ordering one unit via a section card, the controlling Player may order a pair of adjacent Legionary Infantry units to switch hexes—at least one of the units switching places must not be adjacent to an enemy unit. A unit that switched places via the Relief/Cohort Maneuver into a hex adjacent to the enemy may close combat in the same player-turn.
Roman Veteran Initiative:
Up to Two Roman Legionary Heavy Infantry units per Roman Player-turn that are ordered by Line Commands or an “Order Heavy Troops” card may move two hexes and close combat at their option.
Roman Elite Mercenary Slingers
The Roman Slinger units hit on swords when executing missile fire & battle-back.
Elite Legions
Note that all of the initial Roman Heavy Infantry units start the game with five blocks rather than the normal four blocks. These are crack veteran troops, they are treated as normal Heavy Infantry for all other purposes, but have the advantage of an extra block and may rally back to a full five block strength through use of a rally card

The Tigranian Asiatic Army Special Rules
Asiatic Army: The Tigranian Army is assumed to be a typical Asiatic ‘horde’, greatly outnumbering, but inferior in both equipment and fighting spirit to the forces of the Roman Republic’s Legions---In Close Combat and Battle Back ALL Tigranian units, save their Heavy Cavalry make no hits on their enemies if Swords are rolled—always consider Swords to be a ‘miss’ when rolled by the Tigranian Player unless the unit is a Heavy Cavalry one in close-combat or battle-back.
Tigranian Armenian Levy: All Tigranian Auxillia units are assumed to be the Armenian Infantry Levy of the kingdom—these units have no missile capability. These units battle-back with only 2 dice. For all other purposes Tigranian Auxilla are treated as regular Auxilla units
Tigranian Cataphracti: Tigranian Heavy Cavalry is heavily armored—therefore they always ignore the first sword hit inflicted upon them in close-combat or battle-back, or hits from missile or pilum fire. Tigranian Heavy Cavalry may never evade battle, and unlike all other Tigranian units hit on sword rolls.

Outflanking---This is an easy way of introducing facing and flanks to the game with little fuss—it can be retrofitted to other scenarios where appropriate:
A unit is said to be “Outflanked” if it is surrounded in all six adjacent hexes by either enemy units, or hexes adjacent to an enemy unit. The presence of friendly units or impassable terrain does not negate an “Outflanked” situation in any way. Units on the board edges (and not surrounded by six adjacent hexes) cannot be “Outflanked”.
Effects of being Outflanked: “Outflanked” units when battling back roll only half the normal number of dice they would be normally entitled to rounded up—to a maximum of only two dice—“Outflanked” units when battling back never hit on helmet rolls even if supported by a leader. A unit’s “Outflanked” situation is judged at the instant it battles back.
Discard Option—
If a player’s Army Leader is still on the map he may, at the start of his own player-turn, choose to discard three cards from his hand and redraw three more cards in lieu of executing a regular player-turn ---this may only be done in place of taking a normal player-turn (the normal player-turn is skipped over and the enemy player now has the option to conduct a normal player-turn or do a discard for his hand