Historical Background
The Selection below is from the Cambridge Ancient history: “Mithridates concentrated his forces, reduced to a figure of some 30,000 infantry, predominantly bowmen and 2,000 or 3,000 cavalry, at the head of the Lycus valley in Lesser Armenia, a land that had suffered little from past campaigns and housed the royal treasure-stores. In this mountainous zone he occupied a strong position on the unidentified heights of Dasteira, where Pompey endeavoured to encircle him with a series of fixed positions. After some six weeks of evenly balanced fighting Mithridates extricated his forces and withdrew by night eastwards towards the borders of the Armenian kingdom. Pompey pursued, and managed to cut off the Pontic army in a defile, where a night battle was fought in which Pontic resistance rapidly collapsed. Ten thousand casualties were said to be inflicted, and Mithridates escaped with about 2,000 men to Sinora, the most easterly of his treasure houses in Lesser Armenia. This in essence is the story that can be recovered from the contradictory narratives of Plutarch and Dio, a brief summary in Strabo, and an elusive account in Appian, who describes the un-located final battle in different terms. The only firm evidence for the location of the campaign is that the final phase took place in the district where Pompey later established the memorial settlement of Nicopolis, and that the last battle was within the territory of Lesser Armenia.” 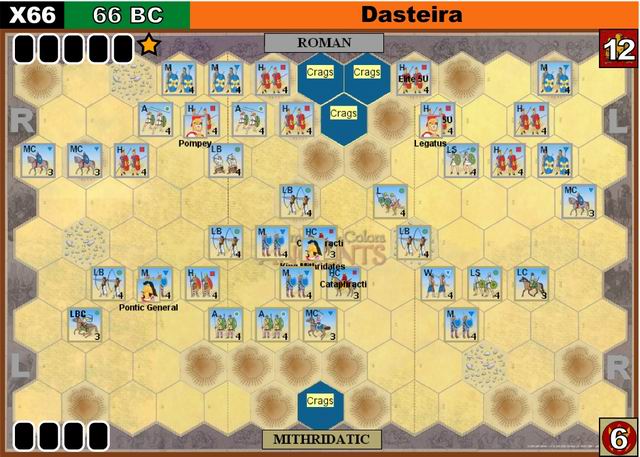 Victory Conditions:
Roman Victory: 12 Banners—Romans score 2 Banners if they manage to eliminate Mithridates. They also can receive 1 Banner if Mithridates is forced to evade off the map.
Mithridatic Victory: 6 Banners, or voluntarily exit enough Units/Leaders from the map to prevent a Roman 12 Banner Victory (see Special Rules Below)

Special Scenario Rules:
Command Rules:
All Mithridatic & Roman Leaders may cancel a retreat or a sword hit if present with the unit. Units on both sides involved in close combat with the support of a Leader may only count one helmet hit amongst those rolled to inflict a hit on an opposing unit, unless King Mithridates or Pompey is the supporting leader---then up to two helmet hits may be counted.
Units and the Rally Card:. No unit can be rallied to beyond five blocks or its strength at the start of the game whichever is less. If a Player rolls “swords” when attempting to rally he may freely chose which unit gets a block back.

Roman Legionary Infantry & other Special Roman Army Rules:
The following types of infantry units in the game on the Roman side are assumed to be Roman Legionaries: ALL Roman Heavy & Medium Infantry.
Roman Pilum:
Each Roman Legionary Infantry unit starts with a Pilum Marker. The Pilum is a one-time use weapon that is generally fired right before a Roman Legionary unit attacks in close-combat or is itself attacked by the enemy in close-combat. Once the Pilum is fired the Pilum marker is removed from the Roman unit to indicate that the Pilum has been expended and the unit may not throw Pilum for the rest of the battle.
Just before a Roman unit with Pilum is attacked or is itself attacked by the enemy for the very first time in the battle in close-combat it throws its Pilum—roll one die and apply normal hits for swords, color, or a Flag/retreat hit Afterwards remove the Pilum marker. The act of throwing the Pilum is not considered to be part of the Close-Combat—so any result of the Pilum throw is resolved before the Close-combat. An attached Leader may use his special ability to cancel a “swords” hit that was inflicted via a Pilum hit (see special Command rules) on the unit he is stacked with.
Roman units, adjacent to the enemy, that have not expended their Pilum may also be ordered to throw Pilum if the card “Darken the Sky” is played by their commanding player. The Player picks one adjacent enemy unit and throws two dice –apply the results just as one would before close combat—and remove the Pilum Marker.
Roman Relief Moves & Cohort Maneuvers:
Adjacent and on the same side Roman Legionary Infantry, instead of moving, may switch places in a “Relief/Cohort Maneuver”. Relief/Cohort Maneuvers may only be conducted through the play of Section cards ONLY. Instead of ordering one unit via a section card, the controlling Player may order a pair of adjacent Legionary Infantry units to switch hexes—at least one of the units switching places must not be adjacent to an enemy unit. A unit that switched places via the Relief/Cohort Maneuver into a hex adjacent to the enemy may close combat in the same player-turn.
Roman Legionary Non-combat Ordered Moves: Legionary units ordered to move with any card except “Double Time” or “Line Command” may move two clear terrain hexes as long as they do not start or end or pass through hexes adjacent to enemy units.
Roman Elite Mercenary Slingers
The Roman Slinger units hit on swords when executing missile fire & battle-back.
Roman Cavalry Discipline: Roman Medium Cavalry only retreat 2 hexes per Flag result taken.

Discard Option—
If a player’s Army Leader is still on the map he may, at the start of his own player-turn, choose to discard three cards from his hand and redraw three more cards in lieu of executing a regular player-turn ---this may only be done in place of taking a normal player-turn (the normal player-turn is skipped over and the enemy player now has the option to conduct a normal player-turn or do a discard for his hand). Neither Player can conduct this discard option during their first two Player-turns of the scenario.

Terrain Special Rules:
Crags: Crag Hextiles are completely impassable
Hills: The Hills are assumed to be very steep (since this battlefield is inside some type of mountain pass)—Ordered Movement into a Hill Tile (even from another Hill Tile) by a unit may only be made if a unit starts its ordered move in an adjacent hex. Once the Hill hex is entered the ordered move ceases in that hex. Cavalry units may not conduct Momentum attacks from Hill hexes and their Momentum moves stop in such hexes. Use all other normal hill hex rules.