Lucullus in Armenia
The Battle of the Arsanias River 68 BC

Historical Background
After King Tigranes’ crushing defeat at the hands of Lucullus in the battle of Tigranocerta (69 BC), a new Armenian army was raised by the King in close cooperation with his father-in-law King Mithridates of Pontus who had taken refuge in Armenia from the Romans about three tears earlier. One Armenian source puts the strength of their new army at 20,000 good cavalry and 50,000 infantry. The strategy of the two kings, with Tigranes commanding the cavalry and Mithridates the infantry, was to attempt to skirmish the Romans to death by cutting off their foragers and besetting with cavalry and light troops Lucullus’ lines of march. Lucullus for his part devastated the countryside, stormed two major population centers, and finally in frustration due to his inability to bring the kings to battle decided to march on the royal Armenian city of Artaxata thereby threatening the King’s wives, children, and the treasures of the court of Tigranes’ domiciled there. The two armies finally fetched up facing each other on opposite banks of the Arsanias river (per Plutarch) with the Armenian host blocking the Roman route to Artaxata. The Armenians deployed all their cavalry under Tigranes with the mounted archers, thousands of heavily armored cataphracti horse, and other cavalry including elite Iberian mercenary lancers well in front of their infantry and immediately contested Lucullus’ advance once he had crossed the river. The Roman cavalry was practically broken up before Lucullus’ veteran legionary infantry arrived to try and retrieve the day. A tough fight against the Armenian cataphracti and Iberian lancers ensued with possibly the masses of Armenian infantry joining the fight in a supporting role. Our ancient authors are split on the final outcome of the battle. Pro-Roman propagandists like Livy and Plutarch suggest another smashing Roman victory, but provide few details to fill in the picture, and blame Lucullus’ subsequent failure to bring the campaign to a successful conclusion or even to capture Artaxata on the weather and mutiny by his troops—other authors seem to imply that the result of this riverside slugfest was more nearly that of a bloody draw. 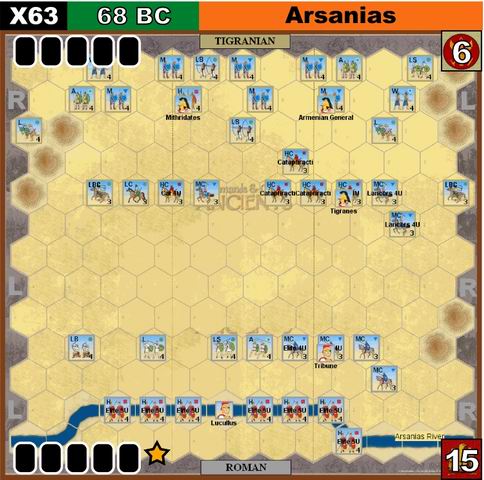 Victory Conditions:
Roman Victory: 15 Banners—Romans score 2 Banners each if they manage to eliminate Tigranes or Mithridates, and 2 Banners per Elite Heavy Cavalry and/or Iberian Lancer
unit they eliminate both in place of the usual one banner per. They also receive 1 banner if Mithridates is forced to evade off the map.
Tigranian Victory: 6 Banners
Bloody Draw: If the Tigranian is at 4 or 5 Banners at the end of any of his Player-turns and the Roman at the same instant is at over 10 Banners play out one more Roman followed by one more Tigranian Player-turn ---if neither player has won victory by reaching his respective instant Banner victory total by the end of those two player-turns, the game ends, and the battle is considered a Bloody Draw.

Special Scenario Rules:
Command Rules:
All Tigranian & Roman Leaders may cancel a retreat or a sword hit if present with the unit. Units on both sides involved in close combat with the support of a Leader may only count one helmet hit amongst those rolled to inflict a hit on an opposing unit, unless Lucullus or Mithridates is the supporting leader---then up to two helmet hits may be counted. Mithridates may not support cavalry in close-combat or battle-back unless he is stacked with the unit supported. The Armenian General Leader may not support units that he is not stacked with in close-combat or battle-back.
Units and the Rally Card:. No unit can be rallied to beyond five blocks or its strength at the start of the game whichever is less. If a Player rolls “swords” when attempting to rally he may freely chose which unit gets a block back.
Heavy & Medium Foot Special Ordered non-Combat Moves:
Heavy and Medium Foot units on both sides ordered to move with any card except “Double Time” or “Line Command” may move two hexes as long as they do not start or end or pass through hexes adjacent to enemy units. (note: this rule was added to increase mobility on this extended map for both sides). Roman Heavy Infantry that start, enter, end, or pass through river hexes during the course of their ordered move may not take advantage of this rule.

Roman Legionary Infantry & other Special Roman Army Rules:
The following types of infantry units in the game on the Roman side are assumed to be Roman Legionaries: ALL Roman Heavy Infantry.
Roman Pilum:
Each Roman Legionary Infantry unit starts with a Pilum Marker. The Pilum is a one-time use weapon that is generally fired right before a Roman Legionary unit attacks in close-combat or is itself attacked by the enemy in close-combat. Once the Pilum is fired the Pilum marker is removed from the Roman unit to indicate that the Pilum has been expended and the unit may not throw Pilum for the rest of the battle.
Just before a Roman unit with Pilum is attacked or is itself attacked by the enemy for the very first time in the battle in close-combat it throws its Pilum—roll one die and apply normal hits for swords, color, or a Flag/retreat hit Afterwards remove the Pilum marker. The act of throwing the Pilum is not considered to be part of the Close-Combat—so any result of the Pilum throw is resolved before the Close-combat. An attached Leader may use his special ability to cancel a “swords” hit that was inflicted via a Pilum hit (see special Command rules) on the unit he is stacked with.
Roman units, adjacent to the enemy, that have not expended their Pilum may also be ordered to throw Pilum if the card “Darken the Sky” is played by their commanding player. The Player picks one adjacent enemy unit and throws two dice –apply the results just as one would before close combat—and remove the Pilum Marker.
Roman Relief Moves & Cohort Maneuvers:
Adjacent and on the same side Roman Legionary Infantry, instead of moving, may switch places in a “Relief/Cohort Maneuver”. Relief/Cohort Maneuvers may only be conducted through the play of Section cards ONLY. Instead of ordering one unit via a section card, the controlling Player may order a pair of adjacent Legionary Infantry units to switch hexes—at least one of the units switching places must not be adjacent to an enemy unit. A unit that switched places via the Relief/Cohort Maneuver into a hex adjacent to the enemy may close combat in the same player-turn.
Roman Veteran Initiative:
Up to Two Roman Legionary Heavy Infantry units per Roman Player-turn that are ordered by Line Commands or an “Order Heavy Troops” card may move two hexes and close combat at their option.
Roman Elite Mercenary Slingers
The Roman Slinger units hit on swords when executing missile fire & battle-back.
Roman Cavalry Discipline:
Roman Medium Cavalry units only retreat two hexes per Flag result inflicted on (or taken voluntary) by them and may ignore the first Sword or Flag hit inflicted upon them in close-combat or battle-back if located adjacent to the hex containing the Roman Tribune Leader (i.e. for this purpose only treat as if they were stacked with the tribune).
Elite Legions & Elite Cavalry
Note that all of the initial Roman Heavy Infantry units start the game with five blocks rather than the normal four blocks. These are crack veteran troops, they are treated as normal Roman Legionary Heavy Infantry for all other purposes, but have the advantage of an extra block and may rally back to a full five block strength through use of a rally card. Additionally certain cavalry units on both sides start the game with four blocks as noted in the setup and are also treated as normal with the initial extra block advantage and the ability to rally back to that level.

The Tigranian Asiatic Army Special Rules
Asiatic Army: The Tigranian Army is assumed to be a typical, but somewhat well trained Asiatic ‘horde’, greatly outnumbering, but inferior in equipment, discipline, and fighting spirit to the forces of the Roman Republic’s Legions---In Close Combat and Battle Back ALL Tigranian units, save their Heavy Cavalry & Iberian Lancer Cavalry make no hits on their enemies if Swords are rolled—always consider Swords to be a ‘miss’ when rolled by the Tigranian Player unless the unit is a Cataphracti Heavy Cavalry or an Iberian Lancer Cavalry unit involved in the close-combat or battle-back.
Tigranian Cataphracti: ALL Tigranian Heavy Cavalry is heavily armored—therefore they always ignore the first sword hit inflicted upon them in close-combat or battle-back, or hits from missile or pilum fire. Tigranian Heavy Cavalry may never evade battle, and unlike most other Tigranian units hit on sword rolls as noted above.
Tigranian Horse Archers: When missile firing at a three hex range Tigranian Light Mounted Archers do so with only 1 dice regardless of whether or not they have moved.