Historical Background
In 78BC Quintus Caecilius Metellus, govenor of Hispania Ulterior, laid siege to the Sertorian stronghold of Langobritae as he knew it was a place with poor water supply that should therefore soon surrender. However, Sertorius, with prior warning, had sent in a stock of water before the siege began. It was the Roman supplies that began to run low first as the siege dragged on longer than expected, so Metellus sent Mareus Aquinas with 6,000 troops to fetch more.
Sertorius set an ambush, with himself attacking the front of the Roman column, while 3,000 Spanish irregulars attacked from the rear. The Romans were quickly overun with only half their men escaping., including Aquinas who had to strip his armour off and escape on foot. Without the supplies Metellus had to abandon the siege. Sertorius had outwitted the Romans again.
(Based on the battle from the GBOH "The Sertorian War" module by Stephen Jackson.)
The stage is set. The battle lines are drawn and you are in command. Can you change history? 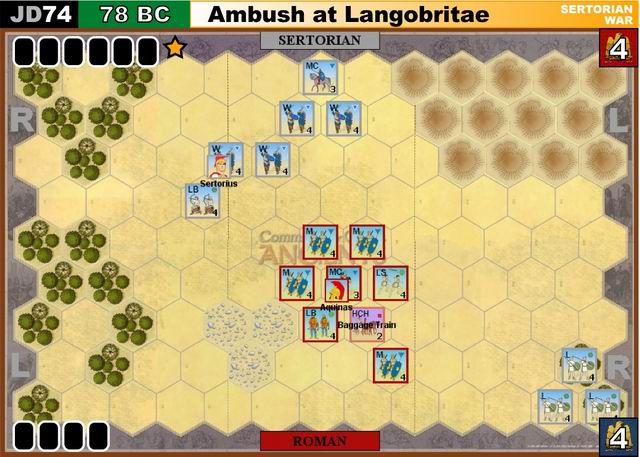 Victory
4 Banners.
Roman player wins if the baggage train unit exits off the Sertorian board edge.

Special Rules
Use a carthaginian heavy chariot unit (2 blocks) to represent the Roman baggage train. It may never move more than 1 hex when ordered. It may not attack or defend and retreats 1 hex. It cannot support but may be supported. It may not ignore a crossed sword and may not evade. It may not enter Woods, hills or broken ground.

Marius Legions Rule is in effect.