Historical Background
Quintus Sertorius was a Roman noble who gained a reputation as a skillful military commander in the wars with the Cimbri and Teutones, and then in the Social War. Sertorius supported Marius’ “populares” and opposed Sullas’ “optimates” during the first Roman civil war, 88-81 BC. After being driven from Italy by Sulla and then expelled from Spain by Sulla’s lieutenants, Sertorius conducted a successful campaign in Mauritania, creating a well-trained army in the process. At this time, Lusitanian emissaries approached Sertorius to beg him to lead them in a rebellion against Sulla’s harsh rule in Spain. After winning a naval battle against Aurelius Cotta, Sertorius landed in southern Spain with a small force of Roman infantry and Moorish cavalry that was quickly joined by Lusitanian tribal levies of horse and foot. The Sullan governor of Hither Spain, Lucius Fufidius, gathered his forces and moved to cut Sertorius off at the Baetis River. Although Fufidius commanded a larger army that also included Roman legionnaires, Sertorius outmaneuvered him with his more mobile irregular force. Sertorius won a great victory. Fufidius retired and thousands more flocked to join Sertorius after his stunning victory.
The stage is set. The battle lines are drawn and you are in command. The rest is history. 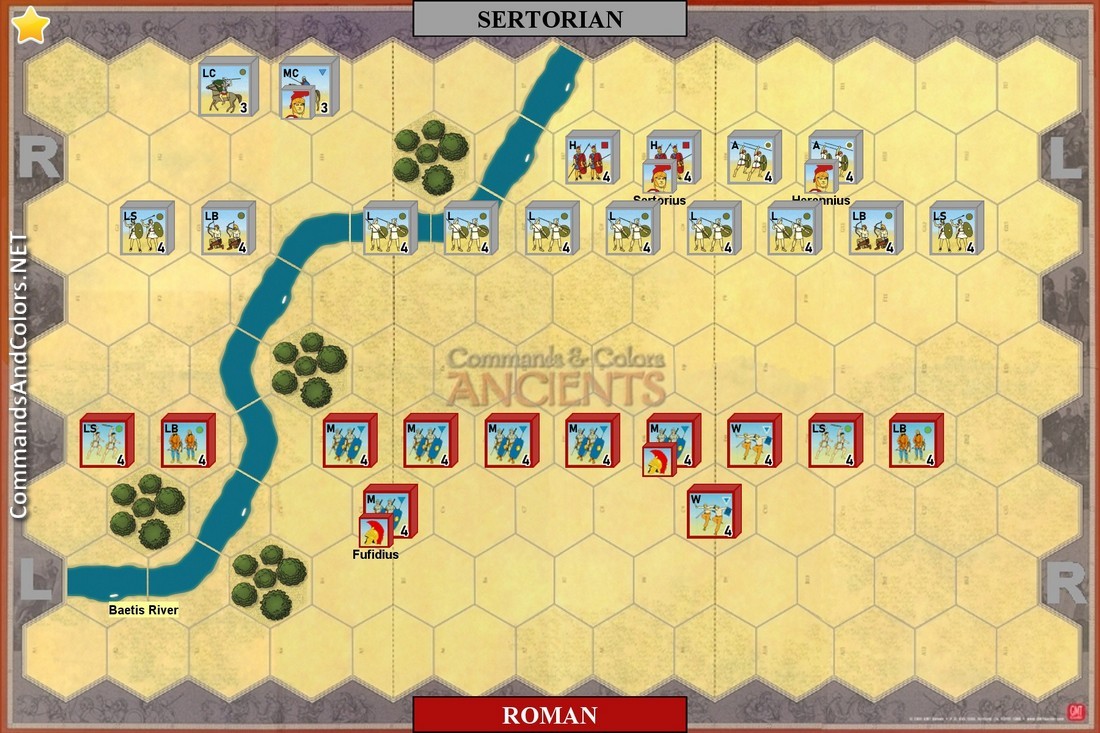 kostas63 replied the topic: #3658 10 months 1 week ago
Vittoria Sertoriana 6-5. All'inizio della battaglia i frombolieri e arcieri su entrambi i fianchi sertoriani tempestano di colpi le unità romane ottenendo qualche successo sui Warriors. Come prevedibile i romani avanzano su tutta la linea centrale usando i pilum prima della mischia. Sertorio ordina ai suoi leggeri di fare spazio affinchè sia le truppe pesanti che gli auxilia di Herrennius possano combattere. Nella lotta che segue i sertoriani perdono entrambe le unità pesanti e lo stesso Sertorio cade sul campo. Ma il sacrificio non è stato invano. Tutto il centro romano è in scompiglio. In pochi istanti gli auxilia sertoriani prima recuperano le perdite e poi contrattaccano la fanteria media romana. Incredibilmente, la vittoria vai ai sertoriani quando l'ordine "Oscurate il cielo" elimina i resti di un'unità romana e uccide il loro comandante in capo Lucio Fufidio.
aetius replied the topic: #3307 1 year 5 months ago
Played as Sertorius. First thing you realize is that the roman infantry is much better. At first we just skirmished a bit with our flank light units and then he advanced. My light troops were just basically "in the way" and essentially proved to be quite useless except as delaying forces. I unleashed sertorius and his legions to halt his infantry, and at first that was quite effective defeating 2 medium infantry but I got swarmed by those wrriors (very deadly units) and both heavies died. Luckily Sertorius escaped into the light infantry masses. Sertorius *does* have a cavalry advantage but wielding it was a pain since they are so far back and behind a river. I did manage to bring in my light cav with mounted charge and routed some bows and got behind his line. The romans had difficulty moving up their infantry due to excellent sertorian light infantry rolls and evades. Over time the warriors and finally the unnamed roman general were brought down ending in a 6-4 in favor of Sertorius.

Tuscan-Centurion replied the topic: #949 10 years 11 months ago
Played this yesterday as the Sertorian side against a regular opponent - King Billy's 14 yo son.

Both sides exchanged missle fire and slowly manoeuvred their troops to get into a good position. Roman Ranged Fire was more telling and eventually forced the Sertorian slingers and archers from the field (2-1).
The Sertorians keep plugging away and used the cavalry to clear their side of the Baetis River to start outflanking the Roman line. (2-2)
That started a slide in fortune for the Sertorians as the Roman legion and warriors started to cut through the left of the Sertorian line like a knife through butter taking out the Lusitanian levies (Auxilia and archers)(5-2).

Sertorius saw the importance of intervention and moved his heavies into the line to hammer the Roman cohorts. Heavy losses for both sides made the game a much closer affair (5-4) and victory finally came to the Sertorians after the heavy infantry took out a Roman cohort and leader in one combat. A narrow win!

King-Billy replied the topic: #929 11 years 1 month ago
Pete and I decided to play the Sertonius campaign, 4 games in a row, countering the number of banners overall.

Baetis River is the first.

I got the Romans. Pete learnt a lesson about putting light infantry into the battle line. He used a Line Command to move all of this main line forward. I used a Counter attack to move mediums and warriors into contact. He evaded with his lights as much as he could, but a couple were pinned with other units blocking retreats and died. This allowed me to advance and battle again against his heavies.

Pete's dice abandoned him. they were just bad. His heavies killed one of my mediums, but then both died. I spent the rest of the game rounding up light infantry to win 6-2. A four flag advantage to me. This was gunna be easy! well, not so.......
Read More...