Historical Background
Quintus Sertorius defeated a series of Roman generals and nearly all of Spain joined his rebellion. He solidified his support through a just administration of the provinces and gained the loyalty of most of the Spanish tribes. Sertorius came to be known as the “second Hannibal” due to his military genius and the fact that he also had lost one eye. Marcus Perpenna arrived from Italy to reinforce Sertorius with a small army and a large number of outlawed “populares” nobles. Sertorius then established a government in exile, creating a “senate” of 300 of the outlawed Roman nobles. Rome was forced to send her best general, the arrogant and ambitious Gnaeus Pompey, to Spain to suppress the uprising. Sertorius laid siege to the Roman allied city of Lauron and Pompey marched to relieve it. A nearby hill appeared to be important and both armies raced to capture the key position. Although Sertorius’ forces succeeded, Pompey thought that he had trapped the enemy between the city and his army. Pompey, disdainful of Sertorius and his army, sent a message to the citizens of Lauron, for them to come to the city walls to watch the destruction of Sertorius. Pompey, however, was so intent on his move to trap Sertorius that he failed to observe a hidden force of 6000 Sertorian soldiers. These troops burst from cover and attacked the rear of Pompey’s army. At the same time, Setorius’ cavalry charged home. Pompey was forced to retire in disorder, and could only watch as Lauron was captured and burned to the ground.
The stage is set. The battle lines are drawn and you are in command. The rest is history. 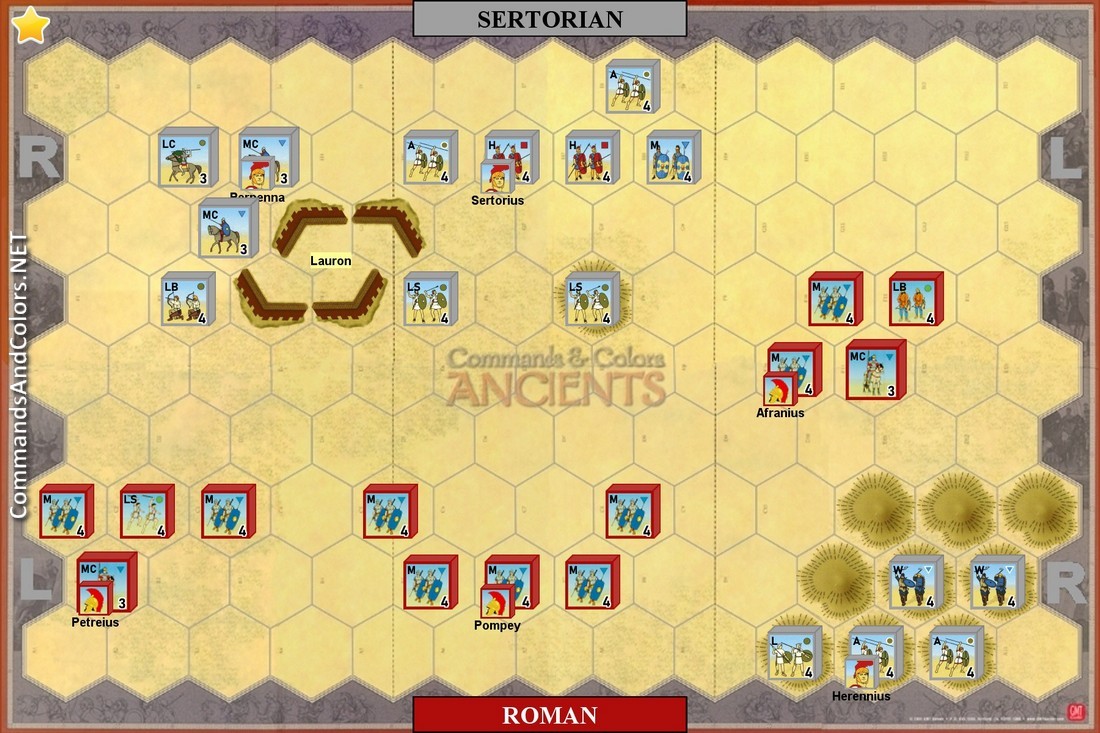 Special Rules
• The four hex town of Lauron is impassable terrain.
• Marius Legions Rule is in effect for both armies.
• Herennius’ ambush force is a part of the Sertorian army. It begins the battle in the Sertorian left map section. The ambush force may be ordered from the first turn onward – no delay is imposed. Herennius’ units must retreat toward the Sertorian mapedge.

Pete went first and used the ambush force to attack my right flank, quickly killing my light bow, but my medium cavalry escaped. Again Pete's dice were not good, and he was showing some frustration. It did not last long.

You will see that the Romans have a single light unit and no heavies, with only two cavalry. Pete did manage to kill one of the cavalry, leaving me with one on the left flank away from anything.

Getting two Order Lights, one Move Fire Move, Two Cavalry Charge and two Order Heavies was therefore not the most useful hand to hold. Moving one unit at a time desperately trying to avoid Pete's relentless attack saw my right melt away. Finally got into a reasonable position with a reasonable card, Pete's medium cavalry charges on the left killing enough to win the game 7-2.

From a four banner lead to a 1 banner deficit. Humble is my middle name.
Read More...