Historical Background
In the campaigns fought in Spain following the battle of Lauron, Quintus Sertorius proved to be a superior general to Gnaeus Pompey. However, Pompey recognized that even if he couldn’t defeat Sertorius, he could defeat his lieutenants. Pompey had begun another campaign against the rebel towns. Sertorius detailed two of his subordinate Roman exiles, Gaius Herennius and Marcus Perpenna, to march to Valentia, and keep Pompey occupied while he dealt with some tribes that had defected. Pompey advanced against the combined forces and forced a battle. Unfortunately for Sertorius, Herennius and Perpenna could not agree on the overall command and fought as separate forces. Pompey attacked Herennius’ legions first while Perpenna (nursing both pride and ambition) did nothing to assist. Herennius died fighting and his command was overwhelmed. However, before Pompey could turn on the other wing, Perpenna withdrew with his forces. Over 10,000 rebels were slain. Pompey had his first major victory in Spain.
The stage is set. The battle lines are drawn and you are in command. The rest is history. 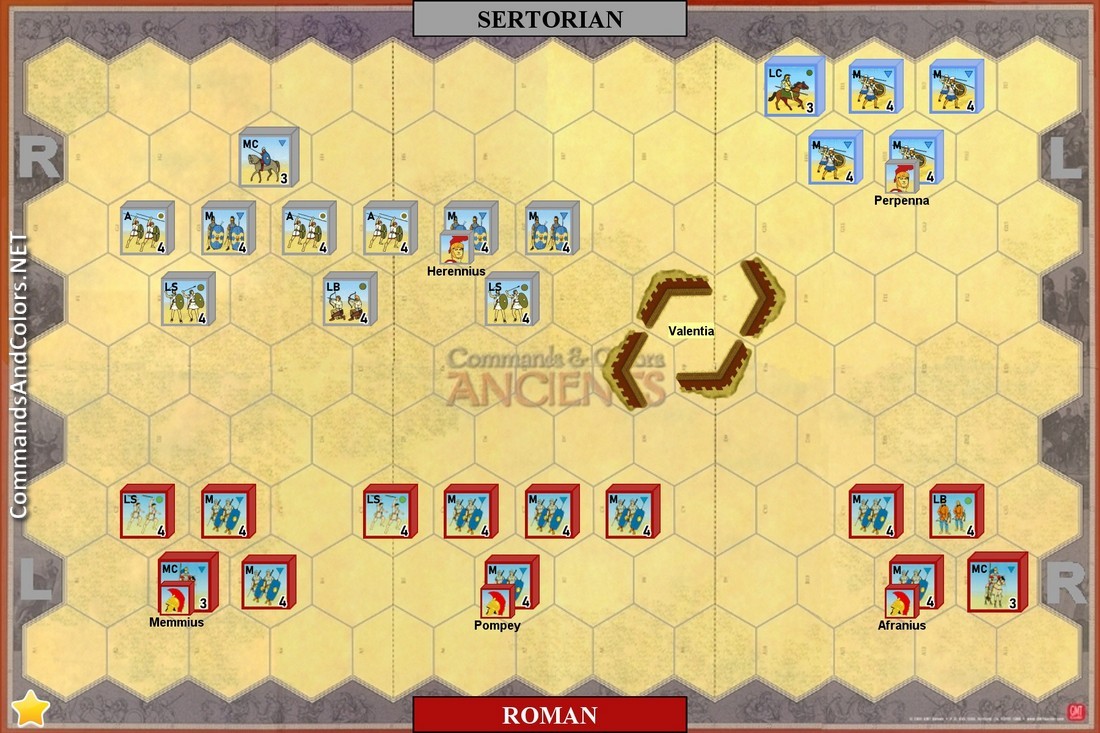 Special Rules
• The four hex town of Valentia is impassable terrain.
• Marius Legions Rule is in effect for both armies.
• The Sertorian player may only order units in one command, Herrenius’ (right/center) or Pepperna’s (left) when a Command card is played. A unit may not change commands, therefore to help track each command, it is recommended that one Sertorian command blocks are laid down and the other Sertorian command blocks are stood up.

airjudden replied the topic: #3791 2 months 2 weeks ago
I have the Sertorians and Herrenius died. Special Rule 3 says command cards can only be played for one Command. I have a Rally card and the bottom text says, "If you do not have a leaders, order to 1 unit of your choice." Can I play the card, declare it for the Herrenius' Command, and then use the exception?
Note: there are other cards like this that could potentially apply, like ones involving mounted units.

kostas63 replied the topic: #3713 3 months 4 weeks ago
Vittoria Romana 6-5. Battaglia combattuta anche se i sertoriani soffrono per le limitazioni di comando. Il primo ad agire è Herrenio che avanza e ingaggia sia Pompeo che Memmio. Il centro è teatro di sanguinosi scontri costringendo alla fine Herrenio a ripiegare. Pompeo è troppo debole per seguire. Perpenna avanza lentamente e lo scontro con Afranio si svolge nei dintorni di Valentia. Le perdite aumentano da entrambe le parti ma la vittoria infine vai ai romani quando in una mischia muore Herrenio.
apergis1@verizon.net replied the topic: #3409 1 year 1 day ago
My wife and I played the game four times this afternoon. I was the Romans. She was the Serterians. The Romans won all four games with final score of 6-5. Two of the Raman victories were dumb luck. In the final attack Roman eliminated all of the units with a leader and killed the leader scoring two banners. That is a one in six roll for the leader check. If the leader had survived, the Sertorians would have won on the next turn.
Valvorik replied the topic: #2648 2 years 9 months ago
6:4 win for Sertorians, who benefited in end game from twice rolling "all kills" on 4 dice, followed by a 6:0 win for Rome who drove the center back.

Tuscan-Centurion replied the topic: #948 10 years 7 months ago
Played this against Master Chief yesterday as the Sertorians.
His Roman skirmishers got the better of the initial missle exchange to reduce a number of Sertorian units but got no banners.
Then both of us moved our lines forward to engage the enemy and Pompey got the jump on the Sertorians as his legion picked out the Sertorian Auxilia and dispatched them with some losses to be up early 4-2.
The left flank stayed quiet as the troops moved around a bit and exchanged some missle fire to reduce a unit here and there. (Neither of us had many cards to use on this flank).
During the next clash of shields Herinnius just survived the lost of a cohort of medium infantry (5-3) and successly evaded the rampaging Roman legion with Pompey at the fore.
The Sertorian cavalry moved up to bolster the line and managed to hold the Roman horse and legion in check. A poor choice in the sequence of his next attack cost Master Chief victory as the Sertorian cavalry evaded an infantry attack to keep the game alive.
Needing 3 banners to win Herinnius eyed off the tired and reduced Romans in front of him and led the remnants of the cavalry (1 block) against the Roman centre. He scattered the Roman horse (5-4) and then momentum advanced against Pompey and his reduced cohort (2 blocks). The legionaires were rode down (5-5) and Pompey died valiantly as the Sertorian horse went on a rampage to give me a narrow victory (6-5). Great game!

King-Billy replied the topic: #931 10 years 9 months ago
the third game in our 4 scenario campaign. I won the first decisively, Pete smashed me in the second. I start with one Banner down.

Pete starts by peppering my line with ranged attacks, getting a frustrating amount of hits. He then uses a Line Command to move his centre and right forward. I counter with a double time with my centre four medium infantry and the fight is on, and a desperate fight it is. we are both dropping units at the same rate. Pompey has a medium infantry cut from under him, but evades to join another, only to have it happen again. This time he has to run to join a light slinger unit.

Never one to avoid battle, Pompey runs forward with his slingers to join the line, giving support to the mediums. This is enough to kill two more, and my medium cavalry takes out his medium cavalry. Three flags in one turn gives me victory 6-3. I am back in front.

Pete did not get the cards to allow his left units to enter the game, allowing me to shift forces from that side to the centre.

Game 4 is on, and I am two Banners up. Given the results of the other games, that in no guarantee of success...
Read More...