Pompey’s Victory at Valentia 75 BC

“…However, afterwards, in a battle near Valentia he (Pompey) gave a great defeat to Herennius and Perpenna, two commanders among the refugees who had fled to Sertorius, and now lieutenants under him, in which he slew above ten thousand men…” (A snippet from Plutarch’s ‘Life of Pompey’) 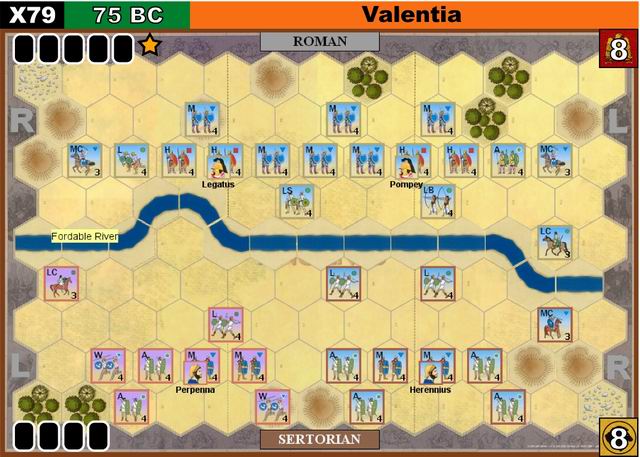 Sertorian Army
Leaders: Herennius and Perpenna (supposedly they were rival Sertorian commanders each with their own forces clubbed together in a polyglot rebel Sertorian army)
4 Cards

Victory:
Victory is 8 Banners for both sides.

Special Scenario Rules:
Leader Command, Pompey, & Rally Special Rules:
All other Leaders may cancel a retreat or a sword hit if present with the unit.
Units on both sides involved in close combat with the support of a Leader may only count one helmet hit amongst those rolled to inflict a hit on an opposing unit, unless Pompey is the supporting leader---then up to two helmet hits may be counted.
Units and the Rally Card: No unit can be rallied to beyond four blocks or its strength at the start of the game whichever is less. If a Player rolls “swords” when attempting to rally he may freely chose which unit gets a block back.