The Battle of Segovia 75 BC

Another critical Sertorian War fight detailing the final defeat and death of Sertorius’ key lieutenant and the loss of his army. Metellus Pius feigned weakness before and at the start of the battle thereby causing his Sertorian opponent Hirtuleius to repeatedly and ultimately fatally miscalculate.

Historical Background:
“The (Roman) wings engaged Hirtuleius first, which was exactly what he wanted. Forward he charged for that thin center, intent upon punching a hole through which he could pull three legions in a hurry, then turn and fall upon its rear. But the moment the Spanish army inserted itself between those unruly wings, Metellus Pius sprang his trap. His best men were hidden within the wings; some suddenly moved to reinforce the center, others turned to fight on the flanks. Before he could attempt to extricate himself, Lucius Hirtuleius found himself rolled neatly into a milling mass of bewildered men, and lost the battle. He and his younger brother died on the field, and the soldiers of Metellus Pius, singing a victory paean, cut the beloved Spanish army of Quintus Sertorius into pieces. Very few of its men survived; those who did fled into Lusitania howling the awful news of defeat, and came no more to fight for Quintus Sertorius….” (From “Fortune’s Favorites” a historical novel by Colleen McCullough pages 555-556) 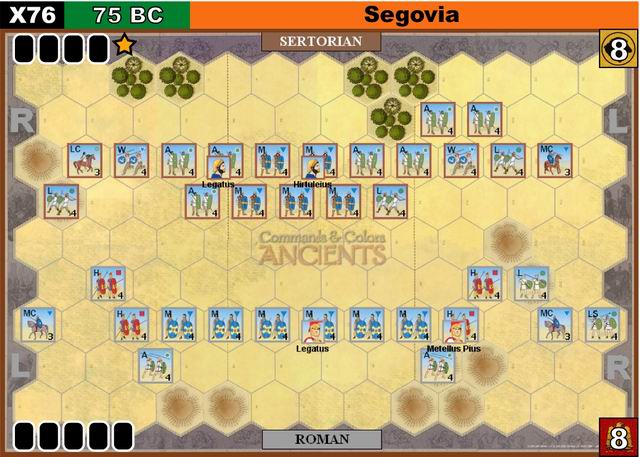 Special Scenario Rules:
Leader Command,& Rally Special Rules:
ALL Leaders may cancel a retreat or a sword hit if present with the unit.
Units on both sides involved in close combat with the support of a Leader may only count one helmet hit amongst those rolled to inflict a hit on an opposing unit.
Units and the Rally Card: No unit can be rallied to beyond four blocks or its strength at the start of the game whichever is less. If a Player rolls “swords” when attempting to rally he may freely chose which unit gets a block back.

Roman Heavy Infantry Veteran Initiative:
Up to Two Roman Legionary Heavy Infantry units per Roman Player-turn that are ordered by Line Commands, Section cards, or an “Order Heavy Troops” card may move two hexes and close combat at their option.