Sertorian War
The Battle of Italica 76BC

Historical Note
Italica was the first Roman military colony created in Spain. It was setup originally by Scipio for wounded soldiers from his army after his crowning victory at Ilipia over the Carthaginians in 206 BC. Historical Background: In the region by Italica near the Baetis River Proconsul Metellus Pius defeated Sertorius’ chief general Lucius Hirtuleius. Sertorius, at the time, was far away confronting Pompey during the siege and battle of Lauron (see the other Sertorian War battle from 76BC), and so could do little in response to both this defeat of his lieutenant and the loss of the important city of New Carthage to another Roman commander. Hirtuleius was forced to retreat back to the Sertorian main base area in Lusitania and did not campaign actively again until the following year. 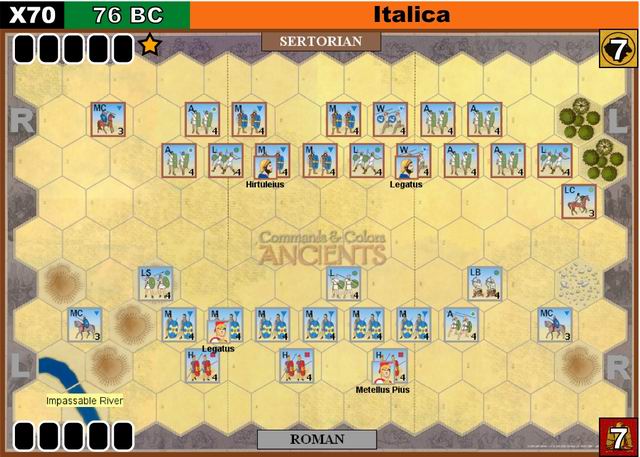 Victory
Both sides: 7 Banners scored in the normal way

Special Scenario Rules:
Leader Command,& Rally Special Rules:
All Leaders may cancel a retreat or a sword hit if present with the unit.
Units on both sides involved in close combat with the support of a Leader may only count one helmet hit amongst those rolled to inflict a hit on an opposing unit.
Units and the Rally Card: No unit can be rallied to beyond four blocks or its strength at the start of the game whichever is less. If a Player rolls “swords” when attempting to rally he may freely chose which unit gets a block back.
Roman Legionary Infantry Rules:
The following types of infantry units in the game on BOTH sides are assumed to be Roman Legionaries: Heavy Infantry, and Medium Infantry, ALL of these units are considered to be Roman Legionary Infantry. The combatants in this era of Roman civil war often recruited non-citizens from different areas of the Roman Republican Empire into their Legions and as a result the quality of such forces sometimes varied widely.
Roman Pilum:
Each Roman Legionary Infantry unit starts with a Pilum Marker. The Pilum is a one-time use weapon that is generally fired right before a Roman Legionary unit attacks in close-combat or is itself attacked by the enemy in close-combat. Once the pilum is fired (or lost see below) –the Pilum marker is removed from the Roman unit to indicate that the pilum has been expended and the unit may not throw Pilum for the rest of the battle.
Just before a Roman unit with pilum is attacked or is itself attacked by the enemy for the very first time in the battle in close-combat it throws its pilum—roll one die and apply normal hits for swords, color, or a Flag/retreat hit Afterwards remove the Pilum marker. The act of throwing the pilum is not considered to be part of the Close-Combat—so any result of the pilum throw is resolved before the Close-combat. If two Roman Legionary Infantry units that have not thrown pilum yet engage the attacker resolves his pilum throw first. An attached Leader may use his special ability to cancel a “swords” hit that was inflicted via a pilum hit (see special Command rules) on the unit he is stacked with.
Roman units, adjacent to the enemy, that have not expended their Pilum may also be ordered to throw Pilum if the card “Darken the Sky” is played by their commanding player. The Player picks one adjacent enemy unit and throws two dice –apply the results just as one would before close combat—and remove the Pilum Marker.
Roman Relief Moves & Cohort Maneuvers:
Adjacent and on the same side Roman Legionary Infantry, instead of moving, may switch places in a “Relief/Cohort Maneuver”. Relief/Cohort Maneuvers may only be conducted through the play of Section cards ONLY. Instead of ordering one unit via a section card, the controlling Player may order a pair of adjacent Legionary Infantry units to switch hexes—at least one of the units switching places must not be adjacent to an enemy unit. A unit that switched places via the Relief/Cohort Maneuver into a hex adjacent to the enemy may close combat in the same player-turn. Sertorian Auxillia units may also conduct Roman Relief/Maneuver with each other or Sertorian Legionary infantry units.