The Battle of the Sucro 75 BC

Historical Background
“The battle near the Sucro was fought, it is said, through the impatience of Pompey, lest Metellus should share with him in victory, Sertorius being also willing to engage Pompey before the arrival of Metellus. Sertorius delayed the time till the evening, considering the darkness of the night would be a disadvantage to his enemies, whether flying or pursuing, being strangers, and having no knowledge of the country.”
“When the fight began, it happened that Sertorius was not placed directly against Pompey, but against Afranius, who had command of the left wing of the Roman army, as he commanded the right wing of his own; but when he understood that his left wing began to give way, and yield to the assault of Pompey, he committed the care of his right wing to other commanders, and made haste to relieve those in distress; and rallying some that were flying, and encouraging others that still kept their ranks, he renewed the fight, and attacked the enemy in their pursuit so effectively as to cause a considerable rout, and brought Pompey into great danger of his life. For after being wounded and losing his horse he escaped unexpectedly. For the Africans with Sertorius who took Pompey’s horse, set out with gold, and covered with rich trappings, fell out with one another; and upon the dividing of the spoil, gave over the pursuit. Afranius, in the meantime, as soon as Sertorius had left his right wing…overthrew all that opposed him; and pursuing them to their camp, fell in together with them, and plundered them till it was dark night; knowing nothing of Pompey’s overthrow, nor being able to restrain his soldiers from pillaging; when Sertorius returning with victory, fell upon him and upon his men, who were all in disorder and slew many of them. And the next morning he came into the field again well armed and offered battle, but perceiving Metellus was near, he drew off, and returned to his camp saying: ‘If this old woman had not come up, I would have whipped that boy soundly, and sent him to Rome’…” (From Plutarch’s Life of Sertorius) 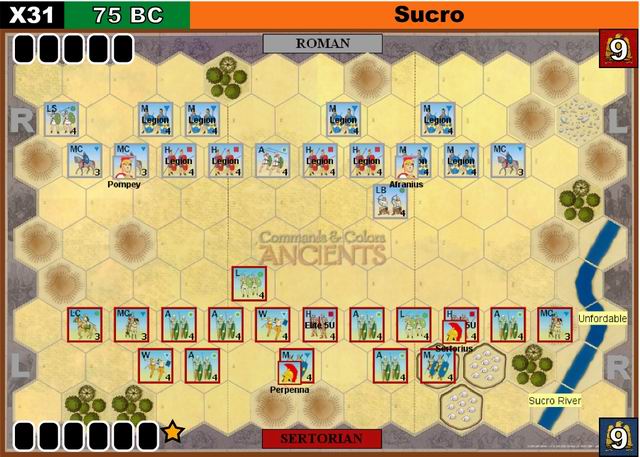 Sertorian Elite Legion:
Note that the two initial Sertorian Heavy Infantry units start the game with five blocks rather than the normal four blocks. These are Sertorius’ crack troops, made up of 4,000 or
so Roman citizens, the veterans of many a bloody fight both in Iberia and Africa while under his command. Treat these units as normal Heavy Infantry for all other purposes, but have the advantage of an extra initial block and may rally back to a full five block strength through use of a rally card

Sertorian Camp: The three Sertorian Camp hex tiles are considered to be un-fortified, these only block line of sight, units entering the camp must cease movement.—if these hexes are entered by Roman units the first Roman unit to enter the hex loses one block (as men split off to loot) immediately, and the camp tile is removed from the map—thereby converting the hex to clear.

Optional Rules:
Sertorian Veteran Mercenaries: The sole Sertorian Light Cavalry unit is made up of Veteran horsemen from Maurentania in Africa located on the other side of the Pillars of Hercules from Iberia. When battling back only they hit on swords—they also only need retreat two hexes per retreat result implemented.

Roman Elite Slingers:
The sole Roman Slinger unit hits on swords when executing missile fire against Sertorian light foot units & also hits on swords when battlling-back in close combat against any Sertorian unit.
Veteran Initiative when ordered by a Line Card
All Sertorian Legionary Infantry units located anywhere and all Roman Heavy Infantry units that start their move stacked with or adjacent to a Roman Leader and that are ordered by a Line Command card may move up to two hexes and close combat at their option.

Free Setup & Random First Move:
This optional rule allows the players’ to specify their initial setup without knowing the content of the enemy’s initial setup. Both Players’ draw their initial hands first before setup and may look at the cards. The Roman Player than writes down the initial setup hexes for all his units and leaders, Cavalry units may not be initially deployed in a hex
wholly in the center section and a player may not have two leaders initially located in the same section (a leader in a dual section hex counts for these purposes as being in both sections), or within 2 hexes of each other. The Roman Player can specify the placement up to 2 units (0-2 units) and no Leaders in the F2-F11 hexrow (all inclusive). He than has to specify the placement of 8 to 11 units and 1-2 Leaders in hexrow G1-G13 and 4 to 7 units and 0-1 Leader in hexrow H1-H12. Once the Roman setup is written down the Sertorian Player proceeds to place his units & Leaders on the board within the following restrictions:
Hexrow D2-D11 (all inclusive)—0-3 units
Hexrow C1-C12 8-12 units 1-2 Leaders
Hexrow B1-B11 4-8 units 0-1 Leader
The Sertorian Player also has to comply with the section restrictions for Cavalry and Leaders outlined above.
Once the Sertorian has finished his on map setup the Roman Player places his units on the map per his pre-written down setup, showing the Sertorian the paperwork. The two players each roll one six –sided dice to determine who moves first--high roll moves first—if the roll is tied the Sertorian moves first; and once the first player is decided, then they proceed to take & resolve the first move of the game.