The Battle of Segontia August 75 BC

Historical Background
After the Battle of Sucro in July 75 BC and having reinforced his army, Sertorius moved on Segontia on the Salo River to engage the combined army of Pompey and Metellus. Sertorius was opposite Pompey and with a frontal assault he killed 6,000 of his men, losing 3,000 of his own. At the same time, Metellus assaulted Perperna's wing and killed 5,000 of Perperna's men. Metellus was however wounded in this action and his proquaestor Gaius Memmius was killed. Sertorius turned to Perperna's aid and savaged Metellus' legions until the darkness fell in. Metellus and Pompey retreated to their camp.
(The above was slightly adapted from Ian’s Great Battles of History website) 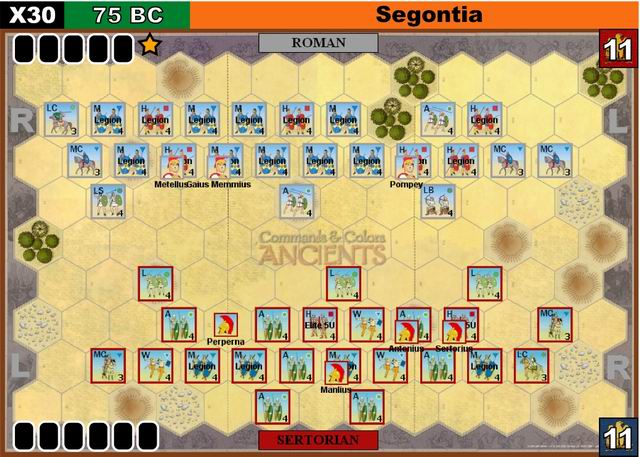 Victory:
Victory is 11 Banners for both sides. The Roman Army receives 2 Banners if Sertorius is eliminated.

Sertorian Elite Legion:
Note that the two initial Sertorian Heavy Infantry units start the game with five blocks rather than the normal four blocks. These are Sertorius’ crack troops, made up of 4,000 or so Roman citizens, the veterans of many a bloody fight both in Iberia and Africa while under his command. Treat these units as normal Heavy Infantry for all other purposes, but have the advantage of an extra initial block and may rally back to a full five block strength through use of a rally card

Special Unit Rules:
Sertorian Veteran Mercenaries: The sole Sertorian Light Cavalry unit is made up of Veteran horsemen from Maurentania in Africa located on the other side of the Pillars of Hercules from Iberia. When battling back only they hit on swords—they also only need retreat two hexes per retreat result implemented.

Sertorian Veteran Initiative when ordered by a Line Card
All Sertorian Legionary Infantry units that are ordered by a Line Command card may move up to two hexes and close combat at their option at +1 normal die roll.
Roman Player Special Battle-Back: Pompey’s and Metellus’ troops are considered to be worn down from constant (often guerilla-style) combat with Sertorius’ forces over the last few years of campaigning. All Roman Player Legionary battle-backs only, are at one dice less than the normal on the card—thus the “normal” battle-back for Roman Player Heavy Infantry is 4 dice, for Roman Player Medium Infantry it is 3 dice.