The Battle of Lauron 76 BC

Historical Background
In an attempt to crush Sertorius against the walls of the city of Lauron, a town in Iberia Sertorius is laying siege to, Pompey’s rear was attacked by enemy forces in covered ambush positions.
Pompey deployed his troops in a crescent formation, so the wings under Lucius Afranius and Marcus Petreius could enclose Sertorius' smaller force. However just as the wings were making contact, Sertorius' hidden force of 6,000 burst from ambush and moved forward to attack Pompey's rear.
The wings were slow to react but eventually Pompey was able to form into square and hold off the enemy. His losses were horrendous, and half his cavalry was killed. Sertorius' losses were also heavy, but he continued the siege. Pompey could not move from camp and was forced to watch as Sertorius reduced Lauron and burned it for its betrayal. Once Pompey could escape he retreated back up the coast to the foot of the Pyrenees and stayed there the remainder of the year.
(The above was slightly adapted from Ian’s Great Battles of History website) 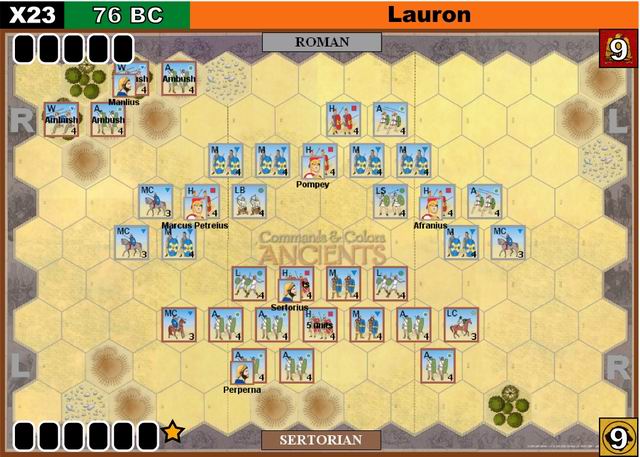 Roman Army
Leader: Pompey
5 Cards (one card must be the “Outflanked” section card, others are drawn randomly)

Special Rules:
Leader Command, Sertorius, Pompey& Rally Special Rules:
Sertorius can cancel both a retreat and a sword hit if present with the unit receiving such hits. All other Leaders may cancel a retreat or a sword hit if present with the unit.
Units on both sides involved in close combat with the support of a Leader may only count one helmet hit amongst those rolled to inflict a hit on an opposing unit, unless Sertorius or Pompey is the supporting leader---then up to two helmet hits may be counted.
Sertorius when moving & ordered by himself without an attached unit normally may move up to six hexes through any passable hexes instead of the regular three hexes for Leaders in the rulebook.

Units and the Rally Card: No unit can be rallied to beyond five blocks or its strength at the start of the game whichever is less. If a Player rolls “swords” when attempting to rally he may freely chose which unit gets a block back.

Sertorian Elite Legion:
Note that the two initial Sertorian Heavy Infantry units start the game with five blocks rather than the normal four blocks. These are Sertorius’ crack troops, made up of 4,000 or so Roman citizens, the veterans of many a bloody fight both in Iberia and Africa while under his command. Treat these units as normal Heavy Infantry for all other purposes, but have the advantage of an extra initial block and may rally back to a full five block strength through use of a rally card.

Optional Rules:
Sertorian Veteran Mercenaries: The sole Sertorian Light Cavalry unit is made up of Veteran horsemen from Maurentania in Africa located on the other side of the Pillars of Hercules from Iberia. When battling back only they hit on swords—they also only need retreat two hexes per retreat result implemented.
Roman Elite Slingers:
The sole Roman Slinger unit hits on swords when executing missile fire against Sertorian light foot units & also hits on swords when battlling-back in close combat against any Sertorian unit.
Veteran Initiative when ordered by a Line Card
All Sertorian Legionary Infantry, and Roman Heavy Infantry units that are ordered by a Line Command card may move up to two hexes and close combat at their option at +1 normal die roll.