Written by Joe Bisio. Posted in Second Mithridatic War (83-82 BC)

Second Mithridatic War
Battle of the Halys River 82 BC

Historical Background
“ The Second Mithridatic War began in this way. [Lucius Licinius] Murena, who had been left by Sulla with [Gaius Flavius] Fimbria's two legions to settle affairs of the rest of Asia, sought trifling pretexts for war, being ambitious of a triumph. Mithridates, after his return to Pontus, went to war with the Colchians and the tribes around the Cimmerian Bosporus [1] who had revolted from him. The Colchians asked him to give them his son, Mithridates, as their ruler, and when he did so they at once returned to their allegiance. “ “The king suspected that this was brought about by his son through his own ambition to be king. Accordingly he sent for him and first bound him with golden fetters, and soon afterward put him to death, although he had served him well in Asia in the battles with Fimbria.” “Against the tribes of the Bosporus he built a fleet and fitted out a large army. The magnitude of his preparations gave rise to the belief that they were made not against those tribes, but against the Romans, for he had not yet restored the whole of Cappadocia to [king]Ariobarzanes[I Philoromaeus], but still retained a part of it. “ “He also had suspicions of Archelaus. He thought that the latter had yielded more than was necessary to Sulla in his negotiations in Greece. When Archelaus heard of this he became alarmed and fled to Murena, and by working on him persuaded him to anticipate Mithridates in beginning hostilities. Murena marched suddenly through Cappadocia and attacked Comana, a very large country town belonging to Mithridates, with a rich and renowned temple, and killed some of the king's cavalry.” “When the king's ambassadors appealed to the treaty he replied that he saw no treaty; for Sulla had not written it out, but had gone away after the terms had been fulfilled by acts.[2] When Murena had delivered his answer he began robbing forthwith, not sparing the money of the temples, and he went into winter quarters in Cappadocia. “ “Mithridates sent an embassy to the Senate and to Sulla to complain of the acts of Murena. [May 83] The latter, meantime, had passed over the river Halys, which was then swollen by rains and very difficult to cross. He captured 400 villages belonging to Mithridates. The king offered no opposition, but waited for the return of his embassy. Murena returned to Phrygia and Galatia loaded down with plunder. “ “There he met [Quintus] Calidius, who had been sent from Rome on account of the complaints of Mithridates. Calidius did not bring a decree of the Senate, but he declared in the hearing of all that the Senate ordered Murena not to molest the king, as he had not broken the treaty. After he had thus spoken he was seen talking to Murena alone.” “Murena abated nothing of his violence, but again invaded the territory of Mithridates. The latter, thinking that open war had been ordered by the Romans, directed his general, Gordius, to retaliate on their villages. Gordius straightway seized and carried off a large number of animals and other property and men, both private citizens and soldiers, and took position against Murena himself, with a river flowing between them. Neither of them began the fight until Mithridates came up with a larger army, when a severe engagement immediately took place on the banks of the river. Mithridates prevailed, crossed the river, and got the better of Murena decidedly. The latter retreated to a strong hill where the king attacked him. After losing many men Murena fled over the mountains to Phrygia by a pathless route, severely harassed by the missiles of the enemy.” (A Selection From the Histories of Appian of Alexandria) 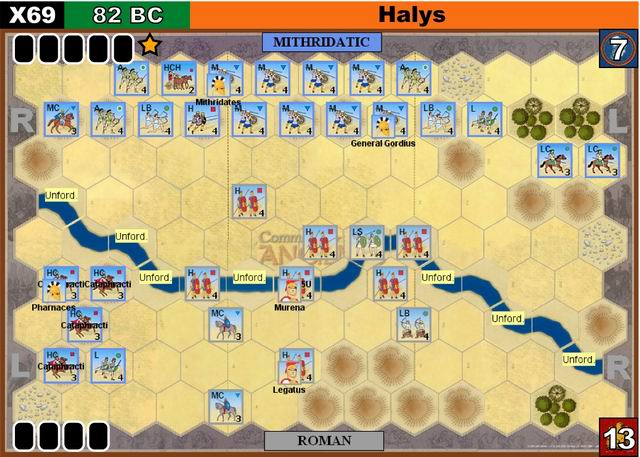 Special Rules:
Command Rules:
All Mithridatic Leaders may cancel a retreat or a sword hit if present with the unit.
Units on both sides involved in close combat with the support of a Leader may only count one helmet hit amongst those rolled to inflict a hit on an opposing unit, unless Mithradates is the supporting leader---then up to two helmet hits may be counted.
Units and the Rally Card:. No unit can be rallied to beyond five blocks or its strength at the start of the game whichever is less. If a Player rolls “swords” when attempting to rally he may freely chose which unit gets a block back.

Roman Legionary Infantry & Roman Trained Pontic units
The following types of infantry units in the game on both sides are assumed to be Roman (or Roman Trained) Legionaries: ALL Heavy and Medium Infantry in both forces.

Roman/Roman Trained Pilum
Each Roman/Roman Trained Legionary Infantry unit starts with a Pilum Marker. The Pilum is a one-time use weapon that is generally fired right before a Roman Legionary unit attacks in close-combat or is itself attacked by the enemy in close-combat. Once the Pilum is fired the Pilum marker is removed from the Roman unit to indicate that the Pilum has been expended and the unit may not throw Pilum for the rest of the battle.
Just before a Roman/Roman Trained Legionary Infantry unit with Pilum is attacked or is itself attacked by the enemy for the very first time in the battle in close-combat it throws its Pilum—roll one die and apply normal hits for swords, color, or a Flag/retreat hit Afterwards remove the Pilum marker. The act of throwing the Pilum is not considered to be part of the Close-Combat—so any result of the Pilum throw is resolved before the Close-combat. An attached Mithridatic Leader may use his special ability to cancel a “swords” hit that was inflicted via a Pilum hit (see special Command rules) on the unit he is stacked with.
Roman /Roman Trained units, adjacent to the enemy, that have not expended their Pilum may also be ordered to throw Pilum if the card “Darken the Sky” is played by their commanding player. The Player picks one adjacent enemy unit and throws two dice –apply the results just as one would before close combat—and remove the Pilum Marker.

The Mithridatic Asiatic Army Special Rules
Asiatic Army: The Mithridatic/Pontic Army is assumed to be a typical Asiatic ‘horde’, greatly outnumbering, but inferior in both equipment and fighting spirit to the forces of the Roman Republic’s Legions---In Close Combat and Battle Back ALL Mithridatic-Pontic units (with two exceptions) make no hits on their enemies if Swords are rolled—always consider Swords to be a ‘miss’ when rolled by the Mithridatic Player unless the swords result was rolled as a result of pilum fire by Roman-trained Pontic Legionary Infantry, or rolled in close combat or Battle-back by a Mithridatic-Pontic Heavy Cavalry unit—these results ONLY count as normal hits.

Outflanking---This is an easy way of introducing facing and flanks to the game with little fuss—it can be retrofitted to other scenarios where appropriate:
A unit is said to be “Outflanked” if it is surrounded in all six adjacent hexes by either enemy units, or hexes adjacent to an enemy unit. The presence of friendly units or impassable terrain does not negate an “Outflanked” situation in any way. Units on the board edges (and not surrounded by six adjacent hexes) cannot be “Outflanked”.
Effects of being Outflanked: “Outflanked” units when battling back roll only half the normal number of dice they would be normally entitled to rounded up—to a maximum of only two dice—“Outflanked” units when battling back never hit on helmet rolls even if supported by a leader. A unit’s “Outflanked” situation is judged at the instant it battles back.
Order of Battle Notes:
Murena probably had about three legions plus various auxiliaries & mercenaries, some 15,000-20,000 men. Mithridates likely brought more than double or triple that number to the battlefield from Pontus to reinforce his general, Gordius, at the river. Some aspects of the setup are drawn from the historical fiction work “The Last King” which allow the initial placement of the Pontic heavy horse on the Roman side of the river.