Historical Background
In 88BC, at the request of Athenian Democrats, Mithridates VI Eupator of Pontus sent an army, commanded by Archelaus, to Athens. Rome responded by sending an army of 5 legions, commanded by Lucius Cornelius Sulla, to oust the Pontics. After a long siege the Romans captured Athens in 86BC and Archelaus fled to northern Greece to join a large Pontic army approaching through Thrace and Macedonia. Sulla, despite being reinforced by Roman troops from Macedonia, was still outnumbered by 3 to 1. The Pontics camped in a secure location near the city of Chaeronea between the mountains of Hedylium and Acontium (off map below the Pontic camp), but came out to fight on the narrow plain of the Cephisus river when the Romans approached.
The battle started badly for Archelaus when a force he had posted on Mount Thurium, overlooking the plain, was driven off with heavy losses due to attacks from above them by citizens of Chaeronea who pelted them with rocks and boulders as part of a pre-arranged plan with Sulla. Archellaus next launched his scythed chariots that had been so effective at the battle of Amnias against the Bithynians, but as the Romans had advanced so quickly the chariots could not get up sufficient speed and the veteren legionaries were easily able to avoid their charge and then counterattack. Meanwhile, Roman war machines from the siege of Athens were pelting the Pontic phalanx from a position of rising ground behind the Roman lines. Archelaus next launched his best troops, consisting of his cavalry and the Brazen Shields under Taxiles, at the Roman left flank commanded by Murena. Murena was hardpressed even when reinforced by the reserve troops commanded by Hortensius, so Sulla on the Roman right rushed over to stabilise the situation with the troops under his command. Twarted again, Archelaus attempted to swing his cavalry over to the now weakened Roman right, but Sulla beat him to the punch and launched his own attack that defeated the Pontic left. With both the Pontic flanks now crumbling the Pontic central phalanx, which had until then been holding its own, collapsed and the whole army routed with only 10,000 survivors out of an army of over 100,000.
(Battle based on  the book "Mithridates the Great" by Philip Matyszak.)
The stage is set. The battle lines are drawn and you are in command. Can you change history? 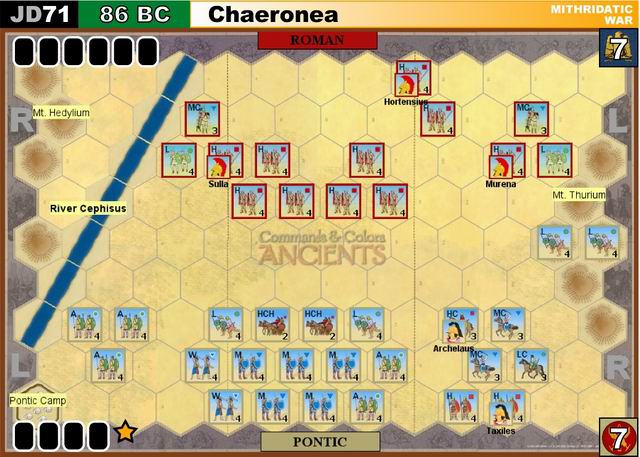 Special Rules
The River Cephisus is not fordable.

At the start of every Roman turn, any Pontic unit on a hill hex is attacked by missile fire of 2 combat dice.

Julian Legions rule is in effect. (The Roman infantry moved very rapidly in this battle).

Tactical flexibility rule is in effect for all Pontic Medium infantry (phalanx) units.

At the start of every Roman turn, that player may make a 1 dice missile attack on any Pontic Medium infantry unit. (This represents Roman siege engines firing from rising ground just off the Roman board edge. The tightly packed Pontic phalanx made an easy target whereas other units would be too mobile or dispersed to be hit effectively at that long range.)