Historical Background
The 1st Mithridatic war broke out when the King of Pontus, Mithridates VI Eupator, annexed the provinces of Bithynia and Cappadochia. The Romans forced Mithridates to hand them back to their rightful heirs, but the Roman administrator on the scene, Manius Aquillius, wanted to enhance his wealth and prestige by an offensive into the Pontus. Manius raised an army of mercenairies and auxilleries from Bithynia, Paphlagonia, Cappadochia and Galatia. He took up position in Bithynia while two other makeshift Roman armies assembled in Galatia and Cappadochia. At the same time the Roman ally King Nicodemes IV of Bithynia invaded Pontus up the Amnias river valley. Nicomedes was severely defeated at the Battle of Amnias. The main Pontic army now headed into Bithynia, defeating a small Bithynian cavalry force of 800 at Mount Scorobas with only 100 Sarmatian cavalry.
Manius turned tail with his army but he was caught near the fortress of Protopachium by a larger Pontic force commanded by the Mithridatic general Neoptolemus and Nemanes an Armenian. Manius was heavily defeated and lost over 10,000 troops. He escaped only to be captured later, whereupon he was paraded around Asia Minor by Mithridates and then killed by having moulten gold poured down his throat. Mithridates went on to conquer most of Asia Minor as the Roman armies evaporated.
The stage is set. The battle lines are drawn and you are in command. Can you change history? 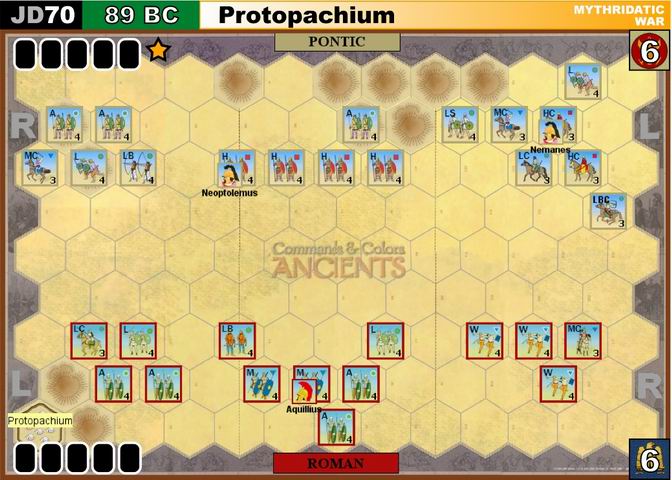 Special Rules
The Marian legion rules are not in effect. (The Roman medium infantry units are actually Bithynian).