Historical Background
In 86BC Sulla received reinforcements from Rome an advance guard of forces under the consul for 86BC L. Valerius Flaccus was cut off by the Pontic Fleet.
These cut off forces defected to Sulla once the peril of the situation became apparent.
Reinforced Sulla turned his attention once more to Archelaus by occupying Philoboeotus to the west of the Pontic army. Archelaus reluctant to give battle was overruled by other commanders. In an attempt to force Sulla from Philobeotus and give battle in the open plain of the Cephisus river Archelaus sent a force to seize the Chaeronea Acropolis which would cut Sulla’s line of communications and retreat through the Kerata Pass. However Sulla had sent General Galba to secure the position with a legion.
Sulla unwilling to leave a legion isolated at the Acropolis and with the Pontic troops who failed to take it taking up positions to its west Sulla ordered his army to march through the plain.
Archelaus confident of victory with his forces 3 times the number of the Romans crossed the river and the battle for Chaeronea had begun.
The Pontic attempts to out flank both Roman wings where beaten back and Sulla then ordered a general advance along the entire Roman line his victory was total.
Appian and Plutarch claim that only 10,000 of the enemy forces survived and escaped to the nearby town. They add that 14 Romans were not accounted for at the end of the battle, two of which returned at nightfall, making the Roman casualty count an unbelievable 12 soldiers.
The stage is set. The battle lines are drawn and you are in command. The rest is history. 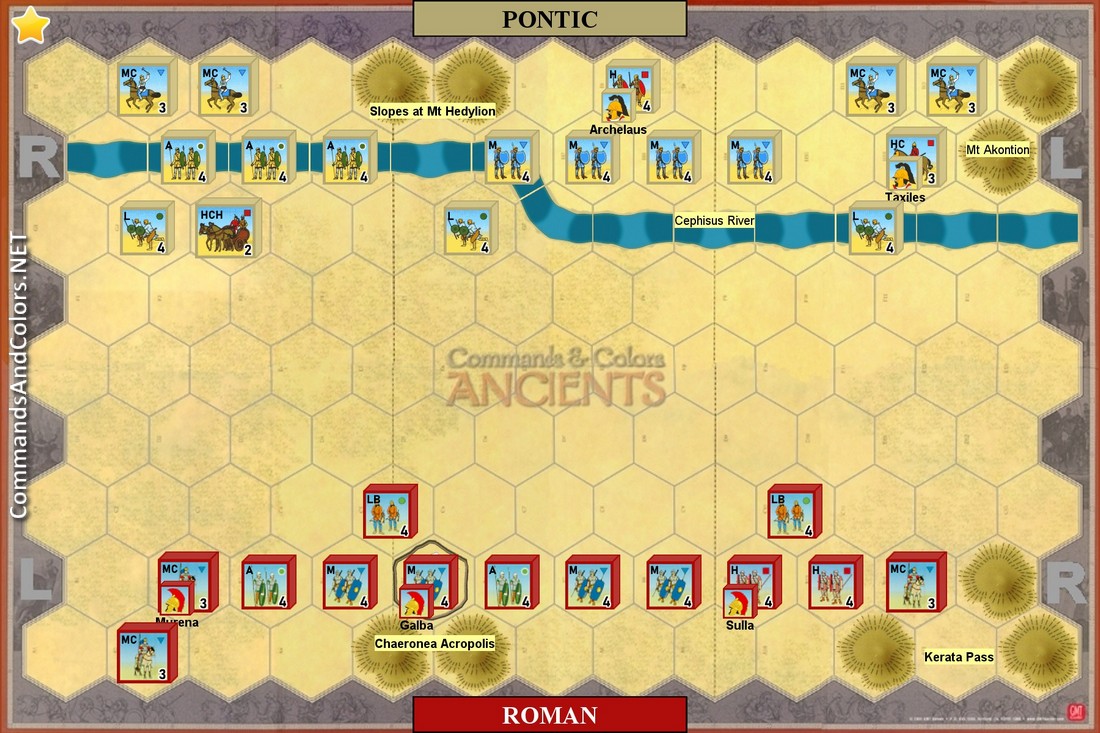 Special Rules
The Cephisus River is fordable along its entire length.

Marian legion rules are in affect for the roman army