Historical Background
“When (King) Nicomedes and the generals of Mithridates came in sight of each other in a wide plain bordered by the river Amnias, they drew up their forces for battle. Nicomedes (the IV) had his entire army in hand; Neoptolemus and Archelaus had only their light infantry and the cavalry of Arcathias and a few chariots; for the phalanx had not yet come up. “
“They sent forward a small force to seize a rocky hill in the plain lest they should be surrounded by the Bithynians, who were much more numerous. When Neoptolemus saw his men driven from the hill he was still more in fear of being surrounded. He advanced with haste to their assistance, at the same time calling on Arcathias for help. “
“When Nicomedes perceived the movement, he sought to meet it by a similar one. Thereupon a severe and bloody struggle ensued. Nicomedes prevailed and put the Mithridateans to flight until Archelaus, advancing from the right flank, fell upon the pursuers, who were compelled to turn their attention to him. He yielded little by little in order that the forces of Neoptolemus might have a chance to rally. When he judged that they had done so sufficiently, he advanced again. At the same time the scythe-bearing chariots made a charge on the Bithynians, cutting some of them in two, and tearing others to pieces. “
“The army of Nicomedes was terrified at seeing men cut in halves and still breathing, or mangled in fragments and their parts hanging on the scythes. Overcome rather by the hideousness of the spectacle than by loss of the fight, fear took possession of their ranks. While they were thus thrown into confusion, Archelaus attacked them in front, and Neoptolemus and Arcathias, who had turned about, assailed them in the rear. “
“They fought a long time facing both ways. After the greater part of his men had fallen, Nicomedes fled with the remainder into Paphlagonia, although the Mithridatean phalanx had not come into the engagement at all. His camp was captured, together with a large sum of money and many prisoners. All these Mithridates treated kindly and sent to their homes with supplies for the journey, thus gaining a reputation for clemency among his enemies. “

(The above selection is from Appian’s annals of the Mithridatic Wars Chapter 18). 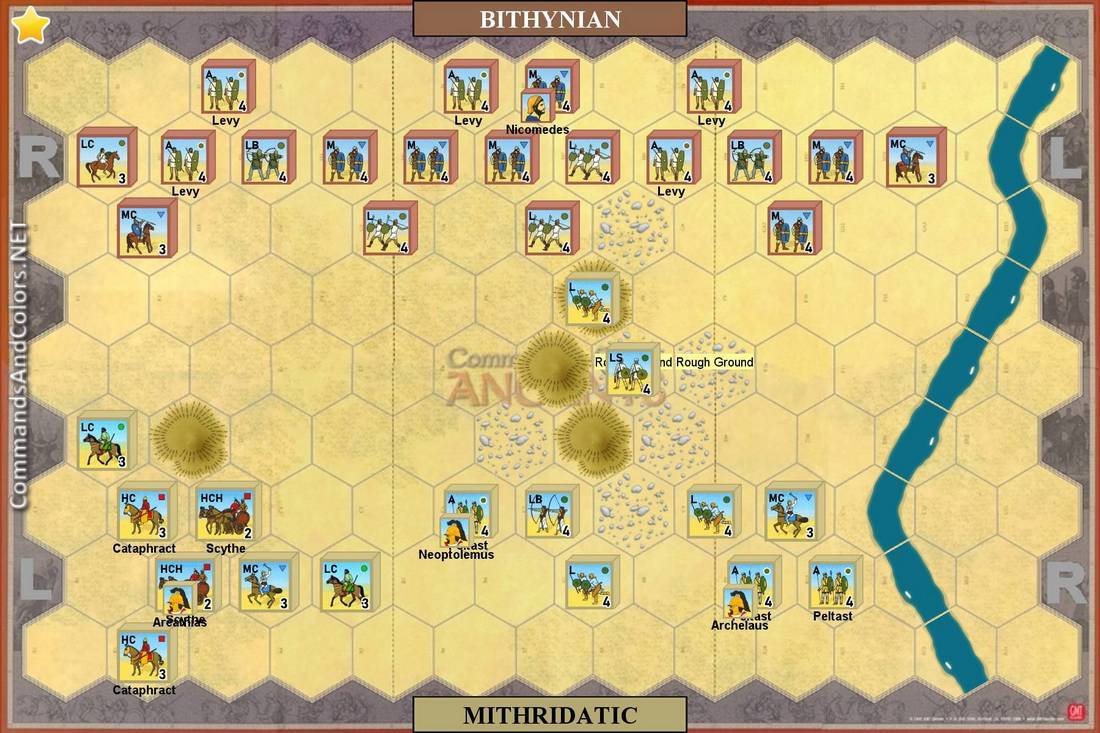 Bithynian units may not conduct ordered moves onto broken ground or hills on the very first Bithynian Player-turn. They may attack, missile fire, and advance into such hexes however on the first turn.

Special Rules
Command Rules:
Units on both sides involved in close combat with the support of a Leader may only count one helmet hit amongst those rolled to inflict a hit on an opposing unit, unless the Leader is Archelaus then up to two helmet hits can be counted.
Units and the Rally Card:. No unit can be rallied to beyond five blocks or its strength at the start of the game whichever is less. If a Player rolls “swords” when attempting to rally he may freely chose which unit gets a block back.
Line Commands: Since this action is a kind of meeting engagement only a limited number of foot units can be moved via a line command card—in this scenario the limit is 5 units as the maximum that can be ordered via a Line Command Card.

Eastern Style Asiatic Armies Special Rules
Both opposing armies assumed to be a typical, but somewhat well trained Eastern Style Asiatic ‘hordes’,  greatly inferior in equipment, discipline, skill, and fighting spirit in comparison to the premier first class fighting force of this era: the veteran Italian Legions of the Roman Republic---Therefore in Close Combat and Battle Back both armies units, save the Mithridatic Heavy Cavalry & Heavy chariots make no hits on their enemies if Swords are rolled—always consider Swords to be a ‘miss’ when rolled by either Player unless the unit is a Mithridatic Cataphract Heavy Cavalry or Mithridatic Heavy chariots  involved in the close-combat or battle-back.

Mithridatic Peltests: All Mithridatic Auxillia are considered to be Peltests—they may evade if attacked by Bithynian Auxillia or Medium Infantry. All have 5 Blocks as well.

Bithynian Levy Foot: All  Bithynian Auxillia have no missile fire capability—their retreat distance is two hexes per Flag result taken or inflicted---In battle-back only their ‘normal’ battle-back dice is two dice instead of three dice.

Outflanking---This is an easy way of introducing facing and flanks to the game with little fuss—it can be retrofitted to other scenarios where appropriate:
A unit is said to be “Outflanked” if it is surrounded in all six adjacent hexes by either enemy units, or hexes adjacent to an enemy unit. The presence of friendly units or impassable terrain does not negate an “Outflanked” situation in any way. Units on the board edges (and not surrounded by six adjacent hexes) cannot be “Outflanked”.
Effects of being Outflanked: “Outflanked” units when battling back roll only half the normal number of dice they would be normally entitled to rounded up—to a maximum of only two dice—“Outflanked” units when battling back never hit on helmet rolls even if supported by a leader. A unit’s “Outflanked” situation is judged
at the instant it battles back.

Optional Rule: Arrival of the Mithridatic Phalanx:
Note: In the historical battle, as Appian notes, the Mithridatic Phalanx had not yet come up. This optional rule allows for the possibility that they could have been available at some point to take part in this meeting engagement fight. Both sides will now have additional units/leader available and the victory conditions also change.

Optional Rule Features:
a)    The Mithridatic Phalanx units (and the Phalanx Polemarch Leader) all start off map—The Mithridatic Phalanx consists of: x4 Medium Infantry, x1 Heavy Infantry and one Leader (the Polemarch)—all begin the scenario off-map—they are marching to the battle.
b)    Add the following units/leader to the initial on-map Bithynian set-up: x1 Medium Infantry, x1 Auxillia (Levy Foot), x1 Light Infantry, and one Leader (Bithynian General)—all begin the scenario on map in the “I” hexrow placed anywhere at the option of the  Bithynian Player in that row where there is space for them.
c)    The Victory Level for both sides is now 9 Banners.
d)    The  Mithridatic Polemarch and Bithynian General Leaders can only support/prevent the retreat of foot units involved in combat in the same hex they are in—they cannot support adjacent units or mounted units.
e)    The Mithridatic Phalanx units/Leader enter if the Mithridatic Player plays any Leadership Card at the start of his 5th or later Player-turn. The here to-fore off map units/leader are then placed immediately in any vacant hexes on hexrow “A” from A1 to A11.
The Leadership card is discarded and not replaced thereby reducing the Mithridatic hand to four command cards for the remainder of the scenario. The Mithridatic Player may play another card and conduct a normal player-turn (with redraw) in the same player-turn that the Phalanx units and the Polemarch Leader are placed on the map. That card could even be used to order the newly placed units/leader.