Lucius Cornelius Sulla vs. the Army of Mithridates

Note: This scenario introduces rules to play out a two-day long battle and siege of a fortified camp. A special sequence describes how to handle the set-up and conduct of each “battle-day” and the reorganization & redeployment that occurred during the night.

Historical Background
“For Dorylaus, arriving at Chalcis with a large fleet, on board of which he had brought over with him eighty thousand of the best appointed and best disciplined soldiers of Mithridates’ army, at once invaded Boeotia and occupied the country in hopes of bringing Sulla to battle, making no account of the dissuasions of Archelaus, but giving out as to the last fight (at Chaeronea in 86 BC), that without treachery so many thousand of men could have never perished….The ground, however, near Orchomenus, where they then lay encamped , gave some encouragement to Archelaus, being a battlefield admirably suited for any army superior in cavalry. Of all the plains in Boeotia that are renowned for their beauty and extent, this alone, which commences from the city of Orchomenus, spreads out unbroken and clear of trees to the edge of the fens in which the Melas (River), rising close under Orchomenus loses itself….”
“Now that both armies were posted near each other, Archelaus lay still, but Sulla employed himself in cutting ditches from either side; that if possible, by driving the enemies from the firm and open champaign, he might force them into the fens. They, on the other hand, not enduring this, as soon as their leaders allowed them the word of command, issued out furiously in large bodies; when not only the men at work were dispersed, but most part of those who stood to arms to protect the work fled in disorder. Upon this Sulla leaped from his horse, and snatching hold of an ensign, rushed through the midst of the rout upon the enemy, crying out aloud, “To me O Romans, it will be glorious to fall here. As for you, when they ask you where you betrayed your general, remember and say at Orchomenus.” His men rallying again at these words, and two cohorts coming to his succor from the right wing, he led them to the charge and turned the day. Then retiring some short distance and refreshing his men , he proceeded again with his works to block up the enemy’s camp. They again sallied out in better order than before. Here Diogenes, stepson to Archelaus, fighting on the right wing with much gallantry, made an honorable end. And the archers, hard pressed by the Romans, and wanting space for a retreat, took arrows by the handfuls, and striking with these as with swords, beat them back. In the end, however, they were all driven into the entrenchment and had a sorrowful night of it with their slain and wounded. The next day again, Sulla, leading forth his men up to their quarters, went on finishing the lines of entrenchment, and when they issued out again with larger numbers to give him battle, fell on them and put them to rout, and in the consternation ensuing, none daring to abide, he took the camp by storm. The marshes were filled with blood, and the lake with dead bodies, insomuch that to this day many bows, helmets, fragments of iron, breastplates, and swords of barbarian make continue to be found buried deep in mud, two hundred years after the fight….”(From Plutarch’s Life of Sulla) 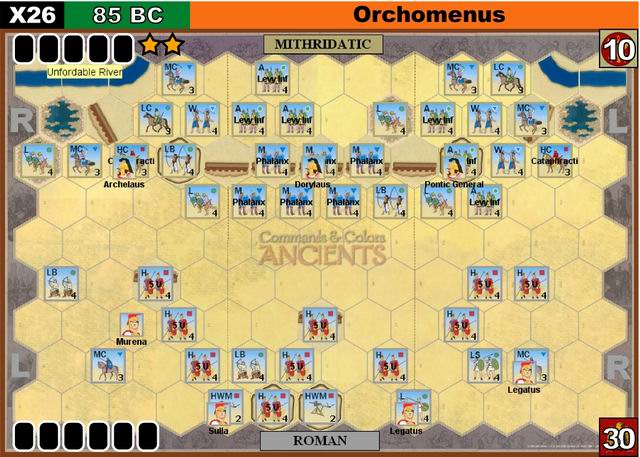 Note: Neither Player may start the game with “I am Spartacus” in his initial hand. Reshuffle the deck after both sides draw their initial hands.

Victory:
Roman Victory: Score 30 Banners: Banners can be scored by a) Eliminating Mithridatic Leaders and units (one banner each except Archelaus =2 Banners) b) Building a barrier rampart from one map end to the other—this scores five banners in toto once—see Terrain rules, and c) Removing Mithridatic Rampart and Camp tiles—one banner is scored for each Rampart tile removed—two banners per Camp tile removed.
MithridaticVictory: Eliminate 10 Banners, or prevent a Roman victory by the end of the second day of battle (see Sequence of Play below)—each Roman Camp Hex tile removed counts as 2 Banners see Terrain rules---The very first Roman Light unit, or War Machine unit eliminated does not count however for Banner/Victory purposes. If Sulla is eliminated 2 banners rather than the normal one are scored.

Command Rules:
All Mithridatic Leaders may cancel a retreat or a sword hit if present with the unit.
All Leaders, save the army commanders: Sulla and Archelaus ,may only support units involved in close-combat or Battle-back if they are directly stacked with the unit. Sulla
and Archelaus are the only leaders in the game that can project such support one hex away from their location per the normal rules.
Units on both sides involved in close combat with the support of a Leader may only count one helmet hit amongst those rolled to inflict a hit on an opposing unit, unless Sulla is the supporting leader---then up to two helmet hits may be counted.

Units and the Rally Card:. No unit can be rallied to beyond five blocks or its strength at the start of the game whichever is less. If a Player rolls “swords” when attempting to rally he may freely chose which unit gets a block back.
Special Terrain Rules:
Swamp tiles: Only Light foot units and Leaders may enter evade or retreat into or through Swamp tiles. For combat into and out of such hexes treat them as if they were Broken Ground hexes.

Roman Legionary Infantry & other Special Roman Army Rules:
The following type of infantry unit in the game the Roman side is assumed to be Roman Legionaries: ALL Roman Heavy Infantry.
Roman Pilum:
Each Roman Legionary Infantry unit starts with a Pilum Marker. The Pilum is a one-time use weapon for that battle-day, and is generally fired right before a Roman Legionary unit attacks in close-combat or is itself attacked by the enemy in close-combat. Once the Pilum is fired the Pilum marker is removed from the Roman unit to indicate that the Pilum has been expended and the unit may not throw Pilum for the rest of the battle.
Just before a Roman unit with Pilum is attacked or is itself attacked by the enemy for the very first time in the battle in close-combat it throws its Pilum—roll one die and apply normal hits for swords, color, or a Flag/retreat hit Afterwards remove the Pilum marker. The act of throwing the Pilum is not considered to be part of the Close-Combat—so any result of the Pilum throw is resolved before the Close-combat. An attached Mithridatic Leader may use his special ability to cancel a “swords” hit that was inflicted via a Pilum hit (see special Command rules) on the unit he is stacked with.
Roman units, adjacent to the enemy, that have not expended their Pilum may also be ordered to throw Pilum if the card “Darken the Sky” is played by their commanding player. The Player picks one adjacent enemy unit and throws two dice –apply the results just as one would before close combat—and remove the Pilum Marker.

Roman Relief Moves & Cohort Maneuvers:
Adjacent and on the same side Roman Legionary Infantry, instead of moving, may switch places in a “Relief/Cohort Maneuver”. Relief/Cohort Maneuvers may only be conducted through the play of Section cards ONLY. Instead of ordering one unit via a section card, the controlling Player may order a pair of adjacent Legionary Infantry units to switch hexes—at least one of the units switching places must not be adjacent to an enemy unit. A unit that switched places via the Relief/Cohort Maneuver into a hex adjacent to the enemy may close combat in the same player-turn.
Roman Veteran Initiative:
Up to Four Roman Legionary Heavy Infantry units per Roman Player-turn that are ordered by Line Commands or an “Order Heavy Troops” card may move two hexes and close combat at their option.
Roman Elite Mercenary Slingers
The Roman Light Slinger units hit on swords when executing missile fire at Mithridatic light foot units & always hit on swords when executing a battle-back.

Sulla’s Elite Legions
Note that all of the initial Roman Heavy Infantry units start the game with five blocks rather than the normal four blocks. These are Sulla’s crack troops, they are treated as normal Heavy Infantry for all other purposes, but have the advantage of an extra block and may rally back to a full five block strength through use of a rally card.
Roman War Machines (WM)
Roman War Machines (WM) have a range of 4…a movement of one and may not move and fire. They may not close-combat attack and battle back with only 2 dice ignoring swords. For most other purposes treat them as a normal missile capable unit, but they do hit on swords when missile firing at any Mithridatic foot unit. The WM units are considered to be heavy foot units with a retreat of one hex.

The Mithridatic-Asiatic Army Special Rules
Asiatic Army: The Mithridatic Army is assumed to be a typical Asiatic ‘horde’, greatly outnumbering, but inferior in both equipment and fighting spirit to the forces of the Roman Republic’s Legions---In Close Combat and Battle Back ALL Mithridatic units make no hits on their enemies if Swords are rolled—always consider Swords to be a ‘miss’ when rolled by the Mithridatic Player.

Mithridatic Cataphracti: Mithridatic Heavy Cavalry is heavily armored—therefore they always ignore the first sword hit inflicted upon them in close-combat or battle-back.

Mithridatic Overnight Reorganization: During the redeployment before the second battle-day the Mithridatic Player may bring back up to two units onto the map that were eliminated during the first battle-day—one Auxillia and one Medium Infantry—these both come back at three (3) block strength. The Roman Player still retains the Banners earned for eliminating such units in the first day of combat.

Outflanking---This is an easy way of introducing facing and flanks to the game with little fuss—it can be retrofitted to other scenarios where appropriate:
A unit is said to be “Outflanked” if it is surrounded in all six adjacent hexes by either enemy units, or hexes adjacent to an enemy unit. The presence of friendly units or impassable terrain does not negate an “Outflanked” situation in any way. Units on the board edges (and not surrounded by six adjacent hexes) cannot be “Outflanked”.
Effects of being Outflanked: “Outflanked” units when battling back roll only half the normal number of dice they would be normally entitled to rounded up—to a maximum of only two dice—“Outflanked” units when battling back never hit on helmet rolls even if supported by a leader. A unit’s “Outflanked” situation is judged at the instant it battles back.
The Redraw Option:
Up to twice per battle-day after his first three player-turns of that battle day a Player may discard from his hand exactly three cards and than redraw three new cards in lieu of taking his normal player-turn. The redraw option cannot be done on two consecutive own player-turns during a battle-day.