“The Battle of the Vineyards”
‘Marius vs the Marsi’ 90 BC

Historical Background
“Cornelius Sulla and Gaius Marius were attacked by the Marsi, but thoroughly routed them, until they met an area of vineyard walls. The Marsi climbed over the walls suffering heavy losses, but Marius and Sulla decided not to follow. However, when Cornelius Sulla whose camp was on the other side of the vineyards saw what was happening, he met the Marsians as they ran out, and killed many of them, with the result that 6,000 of them were slaughtered and the arms of a much greater number captured by the Romans that day. But the Marsi, like wild beasts, became enraged by their failure, armed themselves afresh, and made preparations to attack the Romans, who did not dare to make the first move or initiate battle. For the Marsi are an extremely warlike people, and this is reportedly the only occasion which furnished the Romans a triumph over them, it being previously said that it was impossible to celebrate a triumph either over the Marsi or without them.” (Chapter 46 Book1 from Appian’s Civil Wars) 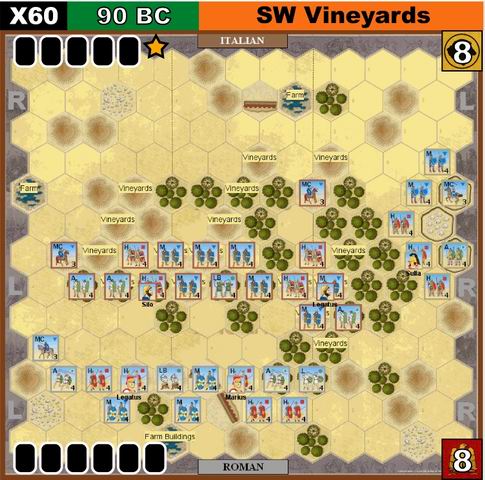 Victory
Victory for both sides is 8 Banners scored in the normal fashion.

Special Scenario Rules:
Command Rules:
The “Marian” Command Card Deck
Historical Note: Combat in the 1st Century BC between Roman/Italian Legions was somewhat different than the wars between civilized states in the 3rd Century BC. There
was less room for combined arms tactics and maneuver, and battles probably tended to be more of the nature of hand to hand full bore slugfests.
This particular scenario utilizes a different Command Card Deck than the original C & C Ancients Deck. Eight (8) Cards are removed from the original deck leaving 52 Cards for scenario play. This new deck is called the “Marian Deck” and it is named after Caesar’s uncle Gaius Marius, a general in the Social War, and a reorganizer of the Roman Legions in circa 105-103BC (several years before Caesar was born) to meet the challenges of the Germanic Tribal invasions that threatened the Roman Imperial Republic of the time.
The following eight cards are removed before play and put aside to create the Marian Deck:
X4 “Order Light troops”, x1 “I Am Spartacus”, x2 “Move-Fire-Move”, x1 “Mounted Charge”---note that one Mounted Charge” card is still retained in the deck.

Leader Command & Rally Special Rules:
All Leaders may cancel a retreat or a sword hit if present with the unit.
If Marius is the Leader in question he may cancel both a retreat and a sword hit if present.
Units on both sides involved in close combat with the support of a Leader may only count one helmet hit amongst those rolled to inflict a hit on an opposing unit, if the Leader is the Romans’ Sulla or Marius up to two helmet hits may be counted.
Units and the Rally Card: No unit can be rallied to beyond its strength at the start of the scenario. If a Player rolls “swords” when attempting to rally he may freely chose which unit gets a block back.
Sulla’s Force Special Rules & Sulla Camp Features:
a) No unit or leader of Sulla’s force can be ordered during the first three Roman Player-turns
b) No Italian unit or leader may voluntarily move, retreat, or evade adjacent to Sulla’s force or attack it with missile fire until after the first four Italian Player-turns.
c) The Italian side may never enter or attack via move, retreat, evasion or close-combat attack into any hexes adjacent to Sulla’s camp tiles—however the Italians may missile fire, or battle-back into such hexes adjacent to Sulla’s camp hextiles, but may never missile fire into a Sulla camp hextile.
d) The Sulla force Medium Cavalry unit may never evade close-combat—but its normal retreat range per Flag result is reduced to one hex per Flag.
e) Sulla force units and the Sulla Leader block retreat/evade on Flag & other results only towards the edge of the map where the Sulla camp is located per the three-hex retreat compass directions laid out in the three examples below: Marius force Roman units/leaders retreat/evade normally towards their edge of the map per the normal rules.
Examples: #1 The Sulla Leader was with a Heavy Infantry unit that was eliminated in B11 and survived his Leader evasion roll. He may evade initially into hexes A12, B12, and C12 per the three hex retreat compass and continue on in the same directions.
#2 A Sulla force Heavy infantry unit is forced to retreat one hex from hex C9 after coming under close-combat attack from vineyard hex C8—it may retreat into hexes
D9, C10, B9 per the three hex retreat compass if those hexes contain no friendly or enemy units.
#3 The Sulla Force Medium Cavalry unit is caught unsupported in hex E10 and has two Flag hits inflicted on it—it must retreat 2 hexes—the first hex of the retreat must be to one of hexes F10, E11, or D10 (if vacant of units) the second hex of the retreat can be to any currently eligible hex in relation to the 3 hex retreat compass—for example if the first hex of the retreat was E11 only F11, E12, and D11 would be eligible for the second hex of the retreat.
Reduced Missile Range Special Rules:
a) Light Archers only have a range of 2 hexes in this scenario—and may missile fire at adjacent enemy units.
b) Auxillia & Light Infantry only have a range of one hex in this scenario—and may missile fire at adjacent enemy units.
c) An ordered unit may either missile fire or conduct close-combat in a player-turn—never BOTH.

Special Terrain Rules:
Level 1 and Level 0 Elevations: The map now, in effect, has contour lines of hexes showing different elevations. Basically there are two Terrain elevations in the scenario: Level 0: which includes all clear terrain and the stone wall, Sulla camp, vineyard, farm building & broken terrain hextiles on the map, and Level 1: which includes all Level 1 Hills, and Level 1 Vineyard/Hills.
Elevation effect on close-combat and battle-back: If a unit is close-combating or battling-back against a unit at a higher elevation (or level) the “normal” maximum dice that unit may use is minus one (-1) normal. If a unit is close-combating or battling-back against a unit at a lower elevation (or level) the “normal” maximum dice is used. If both units are on the same level and there is no other terrain considerations the units would use their standard number of dice as dictated by the rulebook and these scenario rules.
Vineyard and Level 1 Vineyard/Hills: Ordered Cavalry units must cease movement in the first of either Vineyard type hex they enter. Ordered Units entering either vineyard type hex through normal movement may not close-combat attack from a vineyard-type hex in the same player-turn they enter via the ordered move. Units in a vineyard hex of either type always ignore the first sword hit inflicted on them in an individual close-combat, battle-back, or pilum fire, regardless of who is attacking or defending.
A Level 1 Vineyard/Hill combines both the combat and movement effects of a vineyard with the elevation close-combat/battle-back effects of being at a Level 1 elevation. Both types of Vineyard also Block Lines of Sight. Vineyards do not inhibit or stop the ordered moves of foot units or leaders. Vineyard type hextiles do not inhibit Momentum Moves
or Combat of foot units—however cavalry units may only Momentum move into the vacated by combat enemy vineyard hex and no further, and may never Momentum attack if the defender who was turfed out was originally in a vineyard type hex.
Farm Buildings: Foot units battling back from a Farm building hex do so at +1 normal dice. And may ignore one swords result if defending only. Blocks Line of Sight
Stonewalls: Foot units on a Stonewall hex tile attacked from a hex the stonewall is facing battle-back at +1 normal dice and may ignore one swords and one Flag result when defending only. Does not block line of sight
Broken Terrain: Use normal rules—and do not consider relative elevation when close-combating or battling back in or out of broken terrain. Does not block line of sight.
Sulla Camp: See Special rules above—Italian units may not move or close-combat adjacent to the Sulla Camp tiles. The Sulla Camp tiles do not inhibit Roman movement in anyway. Blocks Line of Sight.